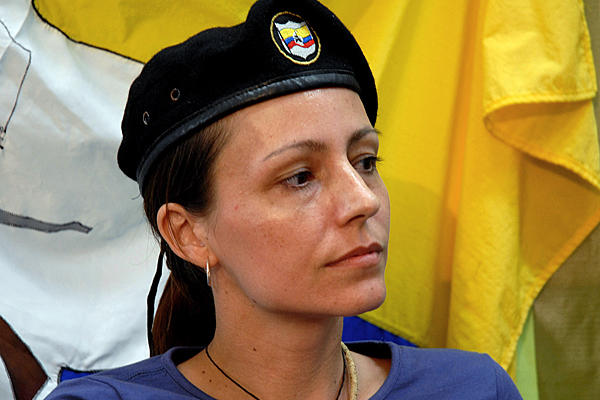 Earlier this year, the Revolutionary Armed Forces of Colombia (Fuerzas Armadas Revolucionarias de Colombia-FARC) expressed its willingness to negotiate a peace treaty with the government of President Juan Manuel Santos. Santos, an ardent supporter of peace in Colombia, has defended this decision to pursue peace negotiations with the militant group, fending off opposition from detractors such as his alienated predecessor, Alvaro Uribe. At the same time, Santos has reminded his fellow Colombians that the original goal of the revolutionary forces, including those that have already rejoined civic life, was to achieve social parity through a selective and democratic process. This important goal cannot be accomplished without the participation and impact of women on peace negotiations and the development of social and economic reforms.

Both parties have pursued the negotiations with enthusiasm and optimism. Norway and Cuba have offered themselves as facilitators, while Chile and Venezuela are participating as witnesses. The original official agenda consisted of land reform, political participation, drug trafficking, recognition of victims, and ultimately a solution to one of the most bitter and prolonged armed conflicts in the Western Hemisphere.[1] The negotiating team is made up of male delegates acting on behalf of the Colombian government and the FARC, who will be deliberating until the end of 2013, when both parties will try to reach an effective peace agreement.

However, even though the process already reveals the protagonists’ fixation on advancing their own political interests, both sides will ideally be mindful of the rock-bottom demands of the other. Moreover, while the peace talk agenda up until now has failed to represent all sectors equally, this inequity is especially pronounced with regard to Colombian women.

Leaders of the FARC and the Colombian government have not yet acknowledged the disproportionate and unequal impact of violence on the lives of Colombian women, with a variety of data suggesting they have been the primary victims of the conflict. As stated by an Oxfam International survey, 17 percent, or almost 500,000 Colombian women, have been victims of sexual abuse from 2001 to 2009 in areas with high concentrations of guerilla groups, paramilitary forces, and the Colombian military.[2] Despite the large number of human rights violations, the lack of female representation in the negotiating group is a glaring oversight, which undermines the role of women in Colombian society, particularly at this very important epoch.

The lack of female representation comes as a surprise given that the Colombian people, along with the President, have supported the incorporation of women into the negotiating teams. According to the President Santos, “Armed conflict has stained the future of many women in our country. They live in this country, [as] women and girls who have been subjected to gross violations of human rights (…). Women have been victims, but can and should be protagonists of the solution This sounds good on paper, but women themselves can far better represent their interests by effectively speaking out in defense of women’s rights, and as such, the presence of female negotiators on each side of the table is crucial. Currently, female representatives have played the role of sideline observers, limited to only recounting testimonies and giving advice in specific areas; they also are not entitled to cast votes at the negotiating table. In fact, only three female negotiators have been authorized to participate in the negotiations, of which two are members of the government and one is a member of the guerilla.[3] Anyone familiar with the subject is aware that Colombian women yearn to reach a comprehensive peace agreement, for it would at the very least take into account their vested interests of reducing inequality and allowing women to play a greater role in deliberations.

Throughout the history of Latin America, women have successfully challenged unjust political agendas and militarist practices. Such has been the case with movements like Mothers of the Disappeared in Argentina and the Catholic Church’s organization of ecclesiastic ally-based communities (CEBS) in Brazil.[4] Similarly, the Network of Afro-Caribbean Women (La Red de Mujeres AfroCaribe, or REMA), a Colombian grassroots movement, has allowed for women’s participation in the Pacific region of the country by using social movements. REMA’s main objective is to achieve economic independence and sustainability on the Pacific coast, where economic development has been repeatedly marred as a result of guerilla and military violence. Furthermore, as a result of years of armed conflict, Afro-Colombian women have been deprived from using their region’s natural resources. Moreover, theyhave been displaced from their land and as a result, they have been traumatized by random violence in the region. In response to this troubling reality, REMA has issued a statement supporting the peace talks while simultaneously calling for a revision to the structure of the process. In fact, the document drafted by REMA emphasizes the importance of incorporating representatives from civil society and promotes the representation of Colombian women in the peace talks.

In the midst of the FARC’s presence in peace negotiations, it is helpful to mention how the group has strayed from its original aim. Initially, the leftist revolutionaries fought for socioeconomic equality, especially for rural Colombians, while opposing imperialism. Now, small farm owners are displaced from their land for the financial benefit of the guerillas. In this process, the group targets male “heads of household,” leaving the women in charge and responsible for the sustainability of the family. Typically, women are then displaced and forced to move from the country to a city, often from lack of economic resources. These helpless women seek some sort of refuge bouncing from city to city across the country, resulting in a loss of values and identity in rural communities. In the process of being obligated to abandon their homes, many of these women experience emotional and psychological trauma. Too often, these women become victims of sexual abuse or human trafficking in zones of conflict.[5]

The possibility of a resolution to the armed conflict in Colombia has given many women hope for social advancement. If the violence is minimized as a result of the peace talks, then military spending could decrease, allowing that money to be potentially invested into social and economic development plans for rural Colombians. Along with social development, a peaceful Colombia will likely lead to a decrease in sex trafficking and prostitution while simultaneously attracting more foreign direct investment. Regardless of the possible beneficial outcomes to this peace process, the lack of female representation in the peace talks achieves only the stagnation of the social advancement of Colombian women.

Diana  Londono, Research Associate at the Council on Hemispheric Affairs