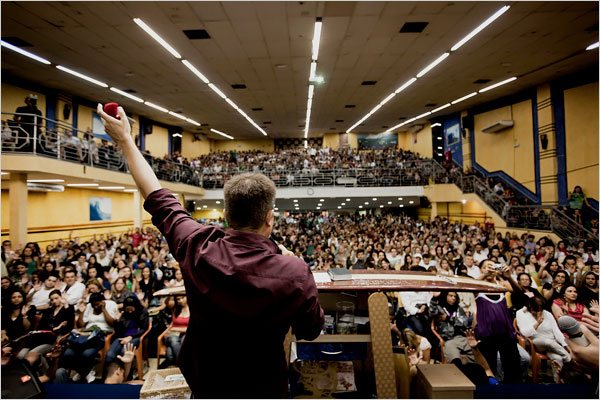 As a consequence of Brazil’s long history as a Portuguese colony, and due to the traditionally robust role of the Portuguese Catholic Church, Brazil is now home to the largest Catholic population in the world. However, in the past thirty years, Protestant values have been almost automatically embraced by millions of Brazilians. Because of the steady penetration of Protestant teachings into the Catholic-dominated culture, Brazil has witnessed a pivotal shift within its religious following–a shift which has opened the door for Evangelical Christians to gain political and economic influence in the prevailing society. Many Church figures feel that this represents a long-term trend.

Protestant denominations made their first appearance in Brazil during the late eighteenth and early nineteenth centuries after being introduced by American missionaries.1 The average Protestant congregation is comprised of numerous factions, which includes Pentecostals, Evangelicals, Baptists, Adventists and Members of the Assemblies of God.2 Overall, in terms of social issues, evangelicals hold more fervently conservative views when compared to those held by Roman Catholics. Currently, 42.3 million Brazilians, or 22 percent of the entire population, have identified themselves as Evangelicals. Contrary to the trend of its Catholic counterparts, this number continues to increase. For example, the 2010 census data indicates that about 123.2 million, or sixty-four percent, of Brazilians identified themselves as Catholics, in comparison to an astonishing 92 percent recorded in 1970.3

Brazilians must pay close attention to the power behind the evangelical vote in the upcoming local and national elections. For example, this “grassroots” movement has advanced an evangelical agenda into the hands of elected evangelical officials. One of their primary political objectives is to substitute, “Catholics as the primary voice of morality in the Brazilian political sphere,” according to the interpretation of one scholar.4 Evangelicals first earned political acknowledgment during the Constitutional revision of 1986.5 Since then, Protestant politicians have been gaining ground in successfully representing conservative moral ideologies throughout the country.

Brazil has a bicameral legislature body made up of a Chamber of Deputies and a Senate. In total there are 594 members of congress, and in the current term there are 73 representatives in office who are evangelical politicians. Evangelical leaders have successfully advocated so-called “traditional values” while in office—both at the local and national level.6 Despite the rising influence of evangelical politicians, due to their limited number, the group is forced to continually pursue collaboration with members of others political parties in order to achieve agenda goals through a functioning cooperation.

It is vital to acknowledge the emerging potential of the evangelical movement in Brazil. Millions of followers have been converted in the past thirty years, a shift that clearly demonstrates the organizational abilities of the movement. Charismatic leadership that emphasizes the modest values of Evangelical followers has guided the movement into an era of remarkable success and growth. Evangelical leadership has persuaded millions to commit to drastic lifestyle changes. These changes push followers to significantly alter their political preferences and, as a result, their vote.  In many cases, new converts are persuaded to give their vote to specific evangelical candidates that they could have previously seen as unattractive options.

In addition to their skills of articulation, Evangelical leaders are also exceptionally resourceful, which is illustrated in their recruitment strategies. In order to recruit a diverse group of believers, the church has had to experiment with various campaign tactics such as Extreme Fight Night, rock concerts, video games, and on-site tattoo parlors. Furthermore, the rate of conversion would not have been as successful without the use of technology, including outreach via radio and television. The Evangelical church has been promoting its message on the radio since the 1950s, and presently, one group, Universal Church of the Kingdom of God, owns “TV Record,” which is one of the country’s core television channels.7

This movement is changing more than just the Brazilian political scene, as it also stretches its tentacles into the very social fabric of Brazilian society. Of great interest is the tendency for Protestant preachers to often overwhelm their followers with the message that financial wealth correlates to God’s approval. Consequently, Brazilian Evangelicals are constantly searching for ways to better their financial situation, as they now see approval from God and financial success as inter-linked.8

Aside from pure ideology, this wave of Protestantism has also allowed for new economic opportunity. A prime example of this bourgeoning market niche is represented by the Evangelical fashion industry. Strict dress restrictions imposed by the creed have created a complex problem for Evangelical women trapped by a fashion market that failed to provide acceptable clothing options. In response to this dilemma, a new industry was formed, one that has successfully merged religious principles with individuality. Ultimately, Evangelicals have constructed a lucrative business in the $52 billion USD a year textile industry in Brazil.9

The rapid increase in the scope of Evangelicalism is creating an interesting transition in historically conservative Brazil. By 2030, the number of Evangelicals is predicted to reach 50 percent of the population. The Evangelical grass roots movement has become a greater part of Brazilian society, and in the process has vastly increased its political and financial importance. Evangelical believers use their collective power to influence politicians while leveraging different forms of media to promote their social conservative ideals. Given the vital role that churches play in forming the social structures in Latin America’s religious identity, it is imperative that Brazilians monitor the movement’s growth in future years.

Diana Londono, Research Associate at the Council on Hemispheric Affairs