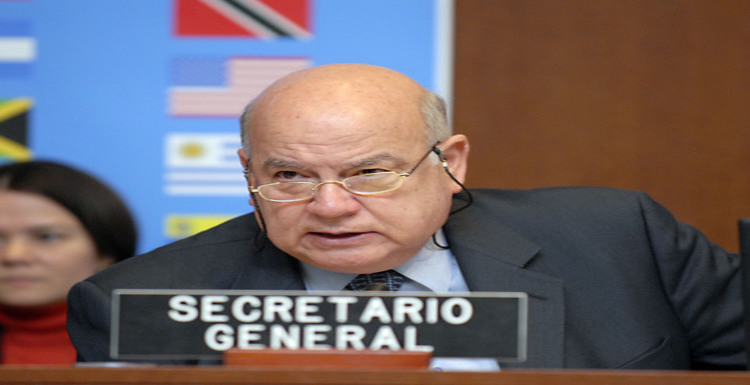 By: German A. Ospina and Lavinia Tombolini, Research Associates at the Council on Hemispheric Affairs

On Tuesday May 26, José Miguel Insulza, the outgoing Secretary General of the OAS, will step down after a decade at the regional post. When he first assumed the Office of the OAS Secretary General in 2005, Insulza pledged to strengthen the Organization’s “political relevance and its capacity for action.” In his initial inaugural speech to the Permanent Council, Insulza emphasized pluralism, diversity, and the promotion of human rights as some of the fundamental qualities necessary for discharging the job of promoting democracy. Insulza stated that the peoples of Americas have a right to insist on democracy and constitutional rule. He stressed that it was the obligation of the organization to safeguard that right by maintaining the rule of law and an open society achieved through ceaseless dialogue. Aside from a few blemishes, he has invested his job with honor.

A lawyer, public figure and teacher by profession, he played a key role in Salvador Allende’s constitutionally elected Popular Unity government, serving as the Political Advisor to the Chilean Ministry of Foreign Affairs and as the director of the Diplomatic Academy of Chile. In the 1973, the Chilean military coup d’état, brought Augusto Pinochet to power, and forced Insulza into exile for 15 years in Italy and later Mexico. In early 1988, he was able to return to Chile and joined the PPD (Coalition of Parties for Democracy), the coalition that triumphantly won the plebiscite against the Pinochet regime in October of 1988.

Since his return to Chile, Insulza has held a number of high-level government positions starting with the Aylwin Administration, where he served as a Chilean Ambassador for International Cooperation, Director of Multilateral Economic Affairs at the Ministry of Foreign Affairs, and Vice President of the International Cooperation Agency. Subsequently, he was appointed Under Secretary of Foreign Affairs and Minister of Foreign Affairs under the second Frei Administration. In 1999, he became Minister and Secretary-General of the Office of the President, and by the turn of the century, he was appointed Minister of the Interior and Vice President of the Republic.

In May 2005, he left the post and forty-eight hours after his resignation as Minister of the Interior, Insulza was elected the Secretary General of the OAS defeating Mexico’s Foreign Minister, Luis Ernesto Derbez, as well as the former President of El Salvador, Francisco Flores Perez. As Secretary General, Insulza has demonstrated superb leadership qualities and brought outstanding contribution to the hemispheric affairs. During his tenure, the OAS has played a key role in negotiations related to regional matters and democratic constitutional processes, including support for autonomy in Bolivia’s Santa Cruz Province and the 2008 Andean Diplomatic Crisis. The latter resulted from the incursion of the Colombian army in Ecuadorian territory, which led to the deaths of twenty militants and sixteen other members of the Revolutionary Armed Forces of Colombia. In 2009, Insulza was instrumental in the lifting of the 1962 resolution promoted by the US, which suspended Cuba from the OAS. He was strongly in favor to better relations between the OAS and Cuba, in the belief that it would bring about more stability to the region. The organization lifted the suspension on the condition of dialogue on the practices, purpose, and principles of the OAS. However, Cuba has shown little interest in joining the organization to date. In a recent interview with the Miami Herald, Insulza was asked if Cuba would be joining the OAS. He responded, “My feeling…is that Cuba will not return yet to the OAS.” He believes that Cuba must first normalize relations with the US before taking the political step to join an Inter-American organization, such as the OAS. Nevertheless, Insulza has always maintained that integrating Cuba into the OAS was a task that should be completed by multilateral, not bilateral needs for the advancement of the region. He has vastly improved the image and independence of the OAS by not allowing Washington’s policy and influence to dictate the motives and actions of the OAS. On numerous occasions, he has positively mediated territorial disputes, as in the case of Belize and Guatemala and has provided outstanding regional support for Haiti after the disastrous earthquake. His practicality in solving disputes allows for the championing of democracy and promotes dialogue. Regarding the statement of US President Barack Obama in which he proclaimed Venezuela to be a national threat to the United States, Insulza has stated that the accusations were too strong and lacked concrete evidence. Insulza also stated that Venezuela has had to face many challenges, but believes that the best way to confront the situation is through peaceful dialogue, again demonstrating that it is better to promote dialogue and inclusion over confrontation. In other instances, Insulza also opposed US policy makers by playing a key role on the Free Trade Area of the Americas (FTAA) initiative. The FTAA was stalled despite constant lobbying by the Bush Administration. Indeed, the FTAA had been considered by many, especially Venezuela, a vehicle for US hegemony in the Western Hemisphere. It would have expanded the North American Free Trade Agreement (NAFTA), including 31 additional nations in the Western Hemisphere. According to Insulza, the FTAA issue was “absolutely non-negotiable for many developing countries in the world, and some of the main parties in the talks, such as Brazil and Argentina”.

Examples of Insulza’s relentless effort to stabilize the region are many. Under his guidance, the Inter-American Commission of Women, one of the oldest bodies in the OAS, has become more and more relevant to the hemisphere. He repeatedly encourages the end of violence against women, the elimination of economic discrimination based on gender, and the equal participation in the political processes for men and women. His commitment to gender equality is exemplified in the OAS approval of the 2014 LGBT human rights resolution, in which the OAS condemns “all forms of discrimination against persons by reason of their sexual orientation and gender identity or expression.” In addition, the OAS has urged all member states to implement policies against discrimination. Under his direction, the OAS carefully examined the ongoing narcotics and organized crime problem in Latin America, most notably in Central America. At the Sixth Summit of the Americas, the OAS member states lobbied the organization for creation of a report on the issue. In response, the OAS issued a report focusing on the drug problem and the deteriorating effects that drugs were having on society and public health. In September 2014, the General Assembly adopted a resolution that recognized the worldwide drug problem and encouraged member states to implement and strengthen comprehensive policies to combat the issue. Prior to his arrival at the OAS, the region had experienced seventeen premature ends to government in fifteen years. During his ten-year reign as Secretary General, the region has only had two premature governmental changes, a statistic that speaks volumes of Insulza’s strenuous work and commitment to the Latin American region.

COHA has had the privilege of hosting Jose Miguel Insulza on various occasions to discuss a broad range of hemispheric issues pertaining to Latin America. In 2014, Mr. Insulza received the prestigious COHA Kalman H. Silvert Award for his leadership and contribution to hemispheric affairs. The award symbolizes gratitude for his achievements as Secretary General of the OAS.

COHA’s Director, Larry Birns in a recent interview, spoke of his great appreciation for Insulza’s laudable work as the Secretary General of the OAS. Mr. Birns stated, “Mr. Insulza has been a resilient leader who was not bound by the dictates of Washington” he added, “[He] did not play a mechanical role for the US or carry out US policy, especially regarding Cuba and Venezuela.” Mr. Birns also noted that Mr. Insulza has taken the “OAS on an independent course that has brought a self-governing attitude to the organization.”

COHA congratulates Jose Miguel Insulza for his multiple achievements and professionalism that he has exhibited during his two terms as Secretary General. We fully expect that the success and prestige that he has garnered for his office will continue to flourish with his successor. His capacity and strength of character to hold the Inter-American region together under the direst of circumstances has placed him among the most prominent Secretary Generals in OAS history.

By: German A. Ospina and Lavinia Tombolini, Research Associates at the Council on Hemispheric Affairs