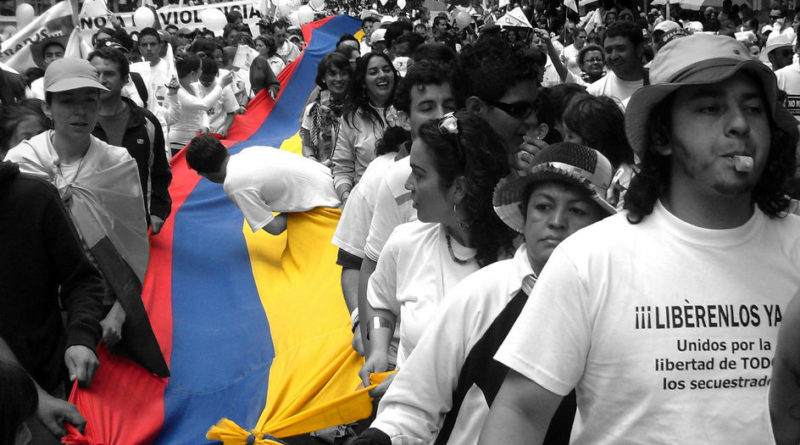 By: Eliza Davis and Michael Paczkowski, Research Associates at the Council on Hemispheric Affairs

On Sunday, June 14, 2015, the Colombian military announced the death of prominent ELN commander José Amín Hernández Manrique in the northern department of Antioquia. The Ejército de Liberación Nacional (National Liberation Army; ELN) is a left-wing guerilla movement, operating under a Marxist platform with the aim of liberating Colombia. The death of Manrique, also known as “Marquitos,” illustrates the rising tensions between the Colombian government and its left-wing guerilla adversaries, the Fuerzas Armadas Revolucionarias de Colombia (Revoluationary Armed Forces of Colombia; FARC) and the ELN. Colombia has been plagued by widespread violence for more than 50 years, which has produced some 220,000 deaths and another 5 million refugees.

The Colombian government and the FARC, the largest and oldest guerilla group in Colombia today, renewed peace negotiation talks—the fourth such attempted in the past 30 years—in December 2012 in Havana, Cuba. So far, the parties have agreed upon three terms of agreement: land reform, political integration, and drug trafficking. Consequentially, Bogotá and the FARC have yet to agree upon the reparations for the conflict’s victims, the disarmament of the rebel forces, and the methods of implementation once a finalized agreement has been signed. While the ELN has had only a minimal presence in the Havana negotiations, the FARC has repeatedly encouraged a greater ELN participation in the discussion, facilitated by Bogotá’s recent lift of the 182 arrest warrants against FARC Commander-in-Chief Rodrigo Londono Echeverri.[1]

Although the negotiations have made many positive strides and remain ongoing, the recent violence presents as a major obstacle with the potential to undermine such progress. On April 15, 2015, the FARC killed 11 Colombian soldiers, ending the uni-lateral cease-fire.[2] Within the last few weeks, the Colombian military has killed 40 FARC members, utilizing various methods ranging from airstrikes to convoy raids. On May 25, 2015, the Colombian military killed FARC commander Román Ruiz, along with four other FARC members. Days later, on May 28, three members of both the Colombian military and the FARC were killed the northeastern municipality of Araquita while on a joint de-mining operation. On Friday, June 12, 2015, the FARC killed three Colombian police officers and attacked a power plant, leaving 500,000 people without power.[3]

Negotiations remain ongoing, with the FARC demanding bilateral cease-fire. The Colombian government has yet to agree to a cease-fire, worried that it would give the FARC a chance to recover from recent losses. Even so, President Juan Manuel Santos claims that with the continuing violence, he remains committed to the peacemaking process.[4] In response to criticism from his predecessor Álvaro Uribe, who asserted that the peace effort should be postponed until the FARC ends its violence, Santos stated, “Those who want to force me to end the peace dialogue are also mistaken. I will persist, even, if that means sacrificing all of my political capital.”[5]

The recent death of ELN commander Manrique reaffirms the continuing state of violence in Colombia not only stemming from the FARC, but also the ELN and the Colombian military itself. The future of the peace negotiations remains unclear. It will take resilience from both Bogotá and the FARC to ultimately reach an agreement. The ELN will hopefully join the Havana negotiations in the recent months. Without a peace agreement, violence will continue to escalate and the dream of a peaceful nation will become less attainable.

By: Eliza Davis and Michael Paczkowski, Research Associates at the Council on Hemispheric Affairs

Featured Photo: Protest for the freedom of those kidnaped by the FARC and the ELN rebels in Colombia. From: Marco Suárez, https://commons.wikimedia.org/wiki/File:Marchando_por_la_libertad_en_Colombia.jpg.