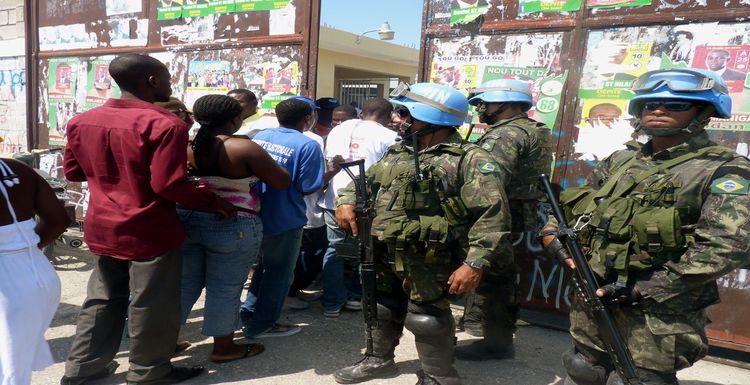 By: Clement Doleac, Research Associate for the Council On Hemispheric Affairs

Elections On Hold In Haiti: Stability Versus Democracy

Democracy in Haiti is again at risk, as a fierce political battle has erupted, preventing the scheduling of new elections. The United Nations (UN), the Organization of American States (OAS), along with the U.S. and French governments have all called for the adoption of a new electoral law, which would allow the elections to go forward. However, given the deeply flawed nature of the present Haitian political system, it is far from clear if just holding elections will accomplish much.

Haiti’s political landscape is today comprised of poorly-organized and highly fluid coalitions of parties, a situation which grows out of the troubled nation’s tumultuous recent history. François “Papa Doc” Duvalier was democratically elected –after a fashion– in 1957, although he quickly came to believe that he was indispensable, declaring himself president for life. He delivered on this threat, ruling as a cruel and paranoid dictator until his death in 1971. With the passing of Papa Doc power fell to his son, Jean-Claude “Baby Doc” Duvalier, who continued his father’s authoritarian regime. Opposition gathered and in 1986, Jean-Claude was finally forced to flee Haiti, one step ahead of an armed revolt against his repressive dictatorship. In the years since 1986, democratically elected presidents have governed Haiti, most notably the charismatic Jean-Bertrand Aristide (1991, 1995-1996, and 2001-2004) and today the talented and handsome singer Michel “Sweet Micky” Martelly (2011-present).[1]

However all is not well in the Haitian democracy, where anarchy reigns in the nation’s fragmented political system. A bewildering array of parties are presently represented in the Chamber of Deputies and the Senate. The slices in the political pie chart (see below) are slender indeed.

Overall, a total of 18 parties are represented in the Chamber of Deputies and seven in the Senate.[6] Because of their small size, most Haitian political parties tend to organize themselves into loose political groupings to build electoral alliances. For example, Inité (Unity), which dominates the current composition of Congress, was formed as a political grouping of several smaller parties to support former president René Préval.[7]

The report by the International Crisis Group (ICG) correctly sums up the chaotic situation. The lack of “ideolog[ical] […] clarity leaves citizens unable […] to choose between clearly defined platforms” in this fragmented political landscape.[8] “Over 100 parties and groups have produced the 5,000 signatures required for registration,” the report continues, and yet for all this diffusion of political input, actual power rests in the hands of only a few well-positioned party leaders.[9] As it stands, the Haitian political parties fail at the most basic tasks, failing to articulate institutionalized policies and to effectively reach out to the citizens.

The weak democratic institutions and the power vacuum provoked by the 2004 crisis led to the absence of strong parties.[10] The ICG report stated that charismatic personalities and “shallow politicians are unfortunately filling this vacuum”.[11] Rather than holding politicians accountable for not addressing Haiti’s economic and social troubles, these personalities have removed citizens from decision-making, who in turn have rendered public policy suspect because of a lack of confidence in the democratic system.[12] This political skepticism, as the myriad of small parties who have little organization, inconspicuous ideologies, and murky proposals consequently created a moldable alliance system and indecipherable political game. However, there are some stable identifiable structures in recent Haitian political history. For example, former President Préval’s platform Inité (Unity, formerly referred to as Lespwa, Hope) counting with a majority in the Senate and partly representing the Fanmi Lavalas tendency (from former elected President Aristide); and the Convention of political parties which brings together 12 political parties and represents the Fanmi Lavalas political group. Another notable party includes the Mouvement de l’Opposition Démocratique (“Democratic Opposition Movement,” MOPOD), an opposition platform led by Mirlande Manigat, former ex-first lady before 2011 and the unfortunate candidate for the 2011 elections.[13]

To most Haitian citizens, politics seem to be little more than an unseemly scramble by opportunistic charlatans fighting over the spoils of office. To most people, their elected political officials seem to be utterly devoid of any guiding principal, faithlessly switching allegiances overnight, and accepting alliances with the very leaders they so convincingly denounced just the day before. The political effect of this is to remove ordinary voters from the decision-making process. Given the endlessly shifting positions of all politicians, no one have any real idea about what they might be voting for.

It is within this context that the long overdue elections for the Chamber of Deputies and a third of the Senate, along with local and municipal elections, were supposed to take place this year. Initially scheduled for 2012, then 2013, and finally October 26, 2014, the elections have now been delayed once again, this time indefinitely. It is anyone’s guess when, or if they might be held at all.

On September 24, the Haitian Prime Minister, Laurent Lamothe, tried to resolve the situation, promising that “we will continue working to ensure that the elections take place as soon as possible.”[14] “There … [has been a pending] law in Parliament for more than 185 days,” Prime Minister Lamothe explained, “[but it is] awaiting ratification by the Senate, where there are six […] extremists who [are] block[ing] the vote, so that the elections are not [being] held.”[15]

In the opinion of this so-called “G-6” (group of six), the presidential draft of the Electoral Law was adopted without any respect for the Constitution or the legislative process. Legislators previously proposed a first draft in 2011, but it was never ratified by President Martelly. The G-6 criticize the way the executive power by decree imposed the members of the Conseil Electoral Provisoire (Provisional Electoral Council, CEP) to be in charge of ruling the electoral process. As The Miami Herald pointed out, “[i]n addition to the senators, several large political parties in Haiti are also opposed to the agreement and were not part of the negotiations [the so-called El Rancho Accord]. In addition to raising constitutional issues, Martelly’s opponents have also raised questions about the formation of the CEP tasked with organizing the vote”.[17] Many feels that it is currently being controlled by the President.”

The Permanent Council of the OAS, weighing in on the matter, blandly and predictably called for the prompt carrying out of the overdue elections. The Permanent Council expressed its, “deep concern for the lack of progress in the electoral process” in Haiti, and urged all political stakeholders to continue dialogue and to fulfill their obligations under the Constitution.[18] The OAS depicted the six senators as the culprits in the electoral hold up. “The Draft Electoral Act, an essential tool for organizing these elections,” the OAS noted, “was passed on April 1 2014 by Haiti’s Chamber of Deputies and immediately transmitted to the Senate for its consideration and approval.” However, the OAS, pointed out, “no action has been taken by the Senate” on this matter.[19] Samantha Power, U.S. Ambassador to the UN, has echoed this outlook, noting with dismay that “a group of six senators seems intent on holding elections hostage to partisan concerns, even going so far as to prevent a debate on the electoral law.”[20] However Mirlande Manigat, Haitian constitutional scholar and runner up in the 2011 presidential elections, blames President Martelly: “for three years, he refused to call elections,” she said.[21] “A large part of this is his fault,” she added, “[and it is therefore] unfair to accuse the six senators for the crisis.”[22]

Last year, Sandra Honoré, the head of the UN Mission to Stabilize Haiti (MINUSTAH), explained what caused the G-6 senators to unite: “Despite the executive branch’s repeated public statements in favor of holding the elections as soon as possible […] [it] had intentionally delayed the process to ensure that Parliament would become non-functional.”[23]

Despite this, problems are much deeper regarding political governance in Haiti. The principal opposition party, Fanmi Lavalas, was not allowed to participate in past presidential elections for questionable reasons, which later led to a boycott of legislative elections.[24] Besides the boycott, some political actors of Fanmi Lavalas ran in the last electoral race and got elected thanks to the Lespwa political platform (and joined Inite), and represent now four senators of six who oppose the actual draft of the Electoral Law. Even with no official representation in the official bodies of the State, Fanmi Lavalas is one of the strongest platforms in the country and should be able to participate in the electoral process. The CEP should also have the support of every political party in the country, in order to avoid future electoral disputes.

Why Hold a Flawed Election?

The Center for Economic Policy Research (CEPR) concluded last month how the United States and other countries involved in Haiti, having done no more than making speeches each year calling for fair elections, “are now willing to accept any sort of election”, even at the cost of violating the Constitution.[25] One of the ICG’s principle recommendations in their February 2013 report was for Haiti to seek “to develop and promote more genuinely representative, better-structured parties capable of formulating and sustaining substantive platforms and playing a more effective role in the country’s development.”[26] Only this, the ICG stated, would allow Haiti to achieve “truly inclusive and competitive elections.”[27] This seems accurate. Certainly Haiti needs to hold elections, but after the fiasco in2010, with massive fraud and less than a quarter of potential voters bothering to cast ballots, it is highly doubtful that simply holding an election will resolve the long-term problems of Haitian political life. It may be impossible to have democracy without elections, but, as Haiti is proving, it is all together possible to have elections and still not have anything close to resembling democracy. What Haiti needs is a real democracy, and elections alone will not accomplish that.

[1]  For more details on the political system in Haiti, past and current, as well as the human rights situation in the country, you can read DOLEAC, Clément, “Human Rights in Haiti”, in Council for Hemispheric Affairs, November 17t, 2014. Consulted on https://www.coha.org/human-rights-in-haiti/ on December 1, 2014.

[2]  http://www.leparlementhaitien.info/chambredesdeputes/fr/la-chambre-des-deputes/repart Last update from the official website of the Deputy Chamber.

[3] Inite is the principal opposition party.

[5] Last update from the official website of the Senate. One third is supposed to finish their mandate in 2014, and for this reason, most observers admit that the Senate actually counts 20 Senators, without any respect for the Constitution. Consulted on http://www.leparlementhaitien.info/lesenat/fr/connaissance-du-senat/repartition-des-sieges-et-liens-vers-le-site-web-de-chaque-parti.html on November 24, 2014.

[6] Other countries in the region have fewer parties represented in Congress. Comparatively, countries with similar electoral systems such as Nicaragua, Costa Rica, Panama, and Honduras have fewer political blocs (two, four, five, and five, respectively).

[10]  For more details on the political system in Haiti, past and current, as well as the human rights situation in the country, you can read DOLEAC Clément, “Human Rights in Haiti”, in Council for Hemispheric Affairs, November 17, 2014. Consulted on https://www.coha.org/human-rights-in-haiti/ on December 1, 2014.

[13] After being kicked out of the presidential race for questionable reasons in 2011, the political party Fanmi lavalas boycotted the legislative elections. However, some of the Fanmi Lavalas politicians participated in the election under the Lespwa (“Hope”) political platform.

[16]  “Haiti Elections – For the 3rd time G6 Senators reject Meeting with President Martelly at the National Palace” in Belpolitik, on October 2, 2014. Consulted on http://www.belpolitik.com/blog/haiti-elections-for-the-3rd-time-g6-senators-reject-meeting.html on December 02, 2014.

[18] The complete Declaration from the OAS can be find on the following link: http://www.oas.org/consejo/resolutions/dec55.asp

[24] For more information on the elimination of the Inite candidate, you can on “Haïti : le parti au pouvoir annonce le retrait de son candidat à la présidentielle” Le Monde.fr with AFP on January 26, 2011. Consulted on http://www.lemonde.fr/ameriques/article/2011/01/26/haiti-le-parti-au-pouvoir-annonce-le-retrait-de-son-candidat-a-la-presidentielle_1471036_3222.html#ens_id=1290927 on November 24, 2014 ; For the containment of Fanmi Lavalas and his non-authorized candidacy for the electoral race, you can look into the article of HALLWARD Peter “Haiti 2010: exploiting the disaster”, on September 23, 2010. Consulted on http://links.org.au/files/hallward-haiti-2010-exploiting-disaster-23-sept-2010.pdf on November 24, 2014.