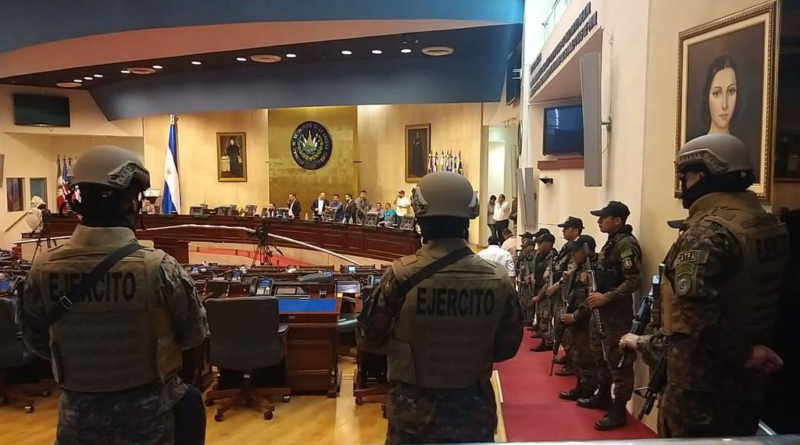 On February 9, Salvadoran President Nayib Bukele of the right wing GANA party deployed the armed forces and civil police around and inside the Legislative Assembly and called on supporters to rally outside in an effort to coerce the legislative branch to act on his crime bill. But because only 20 out of 84 deputies were present, there was no quorum. With the guns of his loyal troops ominously deployed behind him, Bukele entered the legislative chambers, occupied the seat of the president of the assembly, prayed, and then left the building.

Bukele then addressed the crowd of supporters waiting outside the Legislative Assembly, called the Salón Azul. He said God had spoken to him and asked him to be patient, and indicated he, Bukele, would not stand in the way of insurrection should the legislature fail to act within a week. “Let’s give these scoundrels a week. We summon them again if they don’t approve the plan. And if not, I am not going to put myself between the people and Article 87 of the Constitution. It will remain in your hands.”[1]

In fact, Article 87 gives the people the right to insurrection, but only to re-establish constitutional order, not with the purpose of disrupting it. It does not apply in cases when the president does not get what he wants when he wants it. Conservative Salvadoran lawmaker Mario Ponce, president of the Legislative Assembly, said Bukele had “attempted a coup d’etat” against Congress.[2]

Bukele’s unsuccessful power grab and the willingness of the security forces to do his bidding has provoked a significant backlash. Attorney General Raúl Melara declared at a press conference on Monday: “The armed forces should examine their actions. The National Civil Police should examine their actions, because it is not possible that the country returns to times that we now believe have been overcome.”[3] Those “times” refer, no doubt, to the civil war (1979-1992).

Ombudsman of the Office for Human Rights, José Apolonio Tobar, urged Bukele “not to make calls to the Salvadoran people that puts the country in conditions of greater social vulnerability when there do not exist conditions for the exercise of insurrection.”[4]

On the evening of February 10, the Constitutional Court, an arm of the Supreme Court of El Salvador, issued an injunction ordering the Council of Ministers, of which the President of the Republic forms a part, to cease calls to convene the Legislative Assembly to an extraordinary session to approve phase three of the Plan for Territorial Control or for any related purpose. The order prohibits the president from deployment of the armed forces in activities “contrary to ends constitutionally established and that put at risk the republican, democratic, and representative form of government, the pluralistic political system, and in particular the separation of powers.” The court also ordered “the Minister of National Defense and the Director of the National Civil Police not to exercise functions and activities distinct from those for which they are constitutionally and legally obligated.”[5].

That same evening, the legislature also weighed in to condemn Bukele’s political hubris during an extraordinary plenary session of the legislature. The body approved a resolution, with 64 votes, concerning the events that occurred in the Salón Azul last Sunday. The resolution repudiates those actions “that culminated in the violation of the independence of the legislative branch, affecting the democratic system and the functioning of the weights and counterweights in the exercise of power.”[6]

Bukele’s challenge to the independence of the legislative branch of government was not just aimed at passing a piece of legislation. It also posed a serious challenge to the democratic institutionality of a nation that has still not recovered from a long and bloody civil war. With less than ten months in office, the president has placed himself above the law and violated the frail, contentious, but democratic consensus that brought two decades of civil war in this Central American country to an end in 1992.

Abusing the Constitution to force his agenda

The unprecedented assault on the Legislative Assembly followed a previous announcement by President Bukele on February 6 that the Council of Ministers (of which the President of the Republic is a part), invoking Article 67 (7) of the Constitution, had called upon deputies to hold an extraordinary session of Congress on February 9.[7]  The session was to be devoted to the single task of passing Bukele’s bill to authorize the negotiation of a $109 million loan with the Central American Bank of Economic Integration (Banco Centroamericano de Integración Económica, BCIE) to fund phase three of the Plan for Territorial Control, a plan aimed at combating gang related crime and improving public security.

Bukele’s dubious constitutional argument for such heavy handed actions referred to two articles. First, he relied on Article 167 (7) of the Constitution which provides that it corresponds to the Council of Ministers “to convoke extraordinarily the Legislative Assembly when the interests of the Republic demand it.”

President of the Legislative Assembly Mario Ponce argued that the opinion of the Congressional Finance Commission was not favorable to the proposal to fund phase three and that the issues involved required more deliberation in a forthcoming session. He also argued that Bukele is making improper use of Article 167, which should be invoked only in cases of an extraordinary public calamity. Moreover, the use of troops to resolve this dispute does not appear to be consistent with Article 168 (3), which requires the president “To strive for social harmony, and conserve peace and interior tranquility and the security of the human being as a member of the society.” In any case, the Constitutional Court does not seem to be at all convinced by Bukele’s invocation of Article 167, and a more definitive ruling is forthcoming by the judicial branch of government.

Bukele also referred to Article 87 of the Constitution, which he claimed legitimizes insurrection against the legislative branch of government in the case at hand. Bukele’s reference to Article 87 as a premise, rather than support his conclusion, arguably provides ammunition against it. The first sentence reads:

“The right of the people to insurrection is recognized, for the sole object of reestablishing constitutional order altered by the transgression of the norms relative to the form of government or to the political system established, or for serious violations of the rights consecrated in this Constitution.”

Clearly, there has been a “transgression of norms relative to the form of government,” but this has been perpetrated by Bukele himself.  His transgression against the legislative branch of government has seriously violated the separation of powers.

Parties on both the left and right of the political spectrum, as well as respected Salvadoran public figures and intellectuals, and even some of his faithful supporters, have raised alarm bells at the president’s debacle.

The Secretary General of the the opposition leftist FMLN, Oscar Ortiz, was quick to condemn Bukele’s actions prior to Sunday’s transgression against the Legislative Assembly in a tweet on February 8:

“We categorically condemn the actions that pose an extreme danger to the country, undertaken by the President of the Republic @nayibbukele, which breaks the constitutional order and the independence of powers.” [8] The FMLN presented a denunciation to the Attorney General of the Republic against Nayib Bukele for the crimes of “sedition and rebellion.”[9]

Dissent with Bukele’s heavy handedness has also come from the right. Arena deputy Felisa Cristales, who had come to the gathering outside the Salón Azul on February 9, said that “El Salvador is a country whose democracy came at the price of bloodshed. No Salvadoran can agree with this. One should not play with democracy.” [10] But as early as February 7, an official ARENA communique had urged Bukele to “immediately cease his harassment and threats to the Salvadoran constitutional order” and to “respect the independence of the powers.”[11]

The widely respected Jesuit priest of Central American University, José Simeón Cañas (UCA), José María Tojeira, wrote that “to call those who oppose you ‘evil people’ and then invoke the right of insurrection sounds like the caudillista politics of the nineteenth century.”[12]

Bukele’s militarization of the Legislative Assembly also provoked international expressions of concern. US Ambassador to El Salvador Ronald Johnson said that while he agrees the legislature ought to grant funding for security “one has to respect the role of each branch of the State.”[13]

Members of the US Congress also weighed in. On February 10, Chairman of the Foreign Affairs Committee Eliot Engel tweeted: “The Salvadoran military should not be used to resolve disputes between the President and Congress. Civilian differences should be resolved by civilian institutions. The eyes of the world are on El Salvador and @nayibbukele at this critical moment.”

“I‘m closely watching the political crisis in #ElSalvador. A foundation of democracy is respect for the separation of powers and resolving political disputes through dialogue, not force. The military and police should return to barracks and not engage in political matters. Such a show of force echoes the darkest days of El Salvador’s history. Salvadorans have sacrificed so much for democratic institutions — any action to undermine them is simply unacceptable.”[14]

The European Union delegation to El Salvador, in a communique issued on February 9, stated: “We urge the Government of El Salvador and the Legislative Assembly to resolve the situation in a satisfactory and peaceful way and that the independence of the institutions are respected, in full accord with the Constitution. Disrespect for the Constitution breaks 28 years of democratic stability and would cause great harm to coexistence and the international image of the country.”[15]

In true form, however, Secretary General of the Organization of American States Luis Almagro, instead of advising moderation prior to Sunday’s fiasco, did not waste an opportunity to put Bukele’s actions in the most favorable light, tweeting on February 8:

“I had a telephone conversation with Chancellor of #ElSalvador@CancillerAleHT. He expressed respect for the Government of his country [and] for [the] Constitution and institutionality and reaffirmed the commitment of the Government of President @nayibbukele with security policies that have yielded positive results.”[16] Since Bukele has embraced the Monroeist agenda of Washington and the anti-Bolivarian commitments of the Lima Group, he gets a free pass from the Secretary General.

Bukele has no doubt opened a breach within El Salvador’s frail but steady democracy. He has crossed the line of consensus established since the 1992 Peace Accords that limits the role of the military to defense of the homeland and an adjunct role alongside civil police in limited public security functions. In an ominous turn on February 9, the security forces violated their duty to defend the Constitution by functioning as political police inside the Salón Azul.[17]

Maybe the prompt  international and domestic repudiation of his failed military adventure has had some impact on Bukele’s political calculations. By evening on February 9, Bukele issued a press release urging people to “maintain calm in the face of what is happening in the Legislative Assembly,” thereby distancing himself from his own insurrectionary rhetoric of earlier in the day.[18]

How all this turmoil will impact public perception of Bukele’s performance remains to be seen. Polls conducted by UCA in November and December of 2019 placed Bukele’s approval rating at the top of a major “state institutions and social actors.” (7.8 out of 10).[19] He has been a popular president during his first eight months in office. A lot has changed, however, since his deployment of the military inside the Salón Azul and incitement to possible insurrection against the elected legislators.

In the short term, Bukele is likely to retain the devotion of true believers, who see in him the expression of “new ideas” after significant disaffection of the electorate with the major political parties (ARENA and the FMLN). But those with pro-democracy sentiments and historic memory of the civil war may feel increasingly ill at ease with the image of military troops in the Salón Azul. If there is no accountability for this trespass, it could set a dangerous precedent.

Frederick B. Mills, PhD.  is co-Director of COHA and professor of philosophy at Bowie State University.

All translations are by F. Mills and are unofficial.