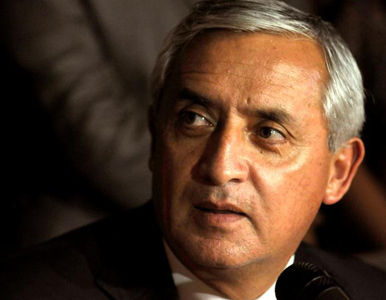 In Latin America there is a saying that goes, el que tranza, no avanza (he who cheats, doesn’t get ahead).”[1] In the case of ex-Guatemalan President Otto Pérez Molina, this saying is directly applicable to his criminal charges of corruption and impunity, which eventually led to his resignation on September 2, 2015, and his arrest the following day.

While the initial scandal of Pérez Molina’s corruption occurred in April 2015, recent reports from earlier this month indicate that several new charges have been added to the already incarcerated politician. Accepting bribes and multi-million dollar gifts, such as luxury vehicles, estates, and even a “Harley Davidson”[2] are among the new charges which were added to the Pérez Molina case. Juan Carlos Monzón, former secretary to ex-vice president Roxana Baldetti, testified to the acceptance of illegal gifts in a recent hearing before the Public Ministry and the International Commission in Guatemala. Throughout the hearing, Monzón admitted to the various charges that had been brought against ex-president Otto Pérez Molina and ex-vice president Roxana Baldetti. According to Monzón, the extortionate gifts were given to Pérez Molina in exchange for his approval of illegal government contracts.

In his testimony, Monzón recounted various clandestine conversations between him, Pérez Molina, Baldetti, and other Guatemalan Ministers regarding certain gifts. Monzón stated that:

(Translation): On the day that ministers […] gave a BEL407 helicopter to President Otto Pérez Molina, he didn’t want to receive it. ‘Well Mr. Pres, we’re here to give you this gift’, Vice-president Roxana Baldetti said to Pérez Molina, who responded: ‘Holy…how do they think… how am I supposed to maintain a helicopter?’*

Throughout the hearing, ex-president Otto Pérez Molina denied the new charges that had been brought against him.

Despite the news of Pérez Molina’s allegations, the situation is nothing new to the people of Guatemala. Throughout its history, Guatemala has had its fair share of former presidents charged for political wrongdoings. Among these presidents are Alfonso Portillo, who was charged for shooting two Mexicans, Óscar Humberto Mejía Victores, who was accused of various human rights violations, and Efraín Ríos Montt, who was also charged with the genocide of indigenous groups and other human rights violations.

Notwithstanding the history of Guatemala’s corrupt and violent leaders, the news of Otto Pérez Molina’s charges should be a sobering reminder to politicians in Guatemala and throughout Latin America que el que tranza, no avanza. Transparency and accountability should be paramount to anyone who wishes to run for president or any other leadership position. The role of a president, be it in Guatemala or anywhere else, is not to surfeit oneself on power and money—but to maintain the integrity of a position that looks to the interest of its citizens and the preservation of good government.

Overall, the investigation and prosecution of these scandals by “the [United Nations’] CICIG (International Commission against Impunity in Guatemala) and Guatemala’s Public Ministry,”[4] is a firm testament that corruption will neither be tolerated nor go unpunished. The collaboration between these two organizations along with the case of ex-president Otto Pérez Molina demonstrates how corruption hinders progress in Guatemala and Latin America as a whole.