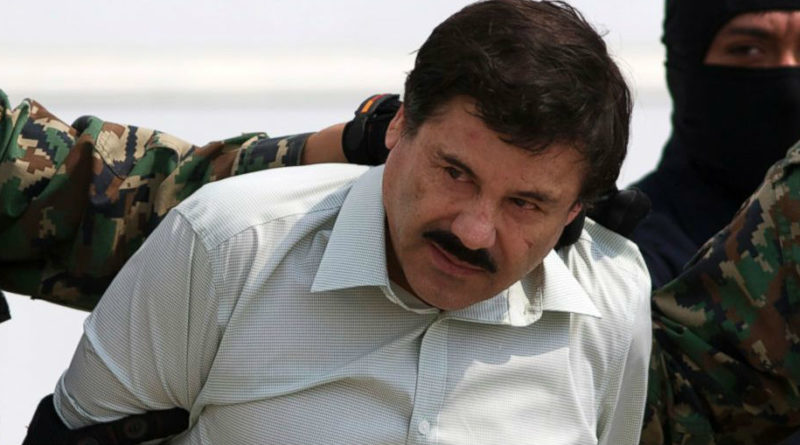 By: Laura V. Natera and Sofia Rada, Research Associates at the Council on Hemispheric Affairs

The escape of notorious drug trafficker Joaquín “El Chapo” Guzmán from Mexico’s highest-security prison has brought a wave of criticism over the Mexican government’s judicial procedures. However, it has also brought to the spotlight how some sectors of Mexican society have romanticized social banditry in recent years.[1] This connotation of social bandits or “narco saints” has sometimes been given to these drug traffickers due to the direct support that they have provided to disadvantaged communities in many areas of Mexico. In the particular case of “El Chapo,” many Mexicans have voiced publicly that they believe that the fugitive has done more for the Sinaloa region than the administration of current Mexican president, Enrique Peña Nieto.[2] Yet, regardless of the questionable moral validity of this view, the current government’s severe weaknesses are undeniable and cover all spheres of constituted power. Simply examining the elaborate way in which “El Chapo” was able to escape from Mexico’s highest security prison suggests that there is extensive corruption and conspiracy not only within the prison, but also within the highest level of the Mexican bureaucracy.[3]

Weary of this reality, many individuals have given their ostensible loyalty to Mexican drug lords instead of the national police because they see this as the most effective way of guaranteeing their own security. Abel Meza Sandoval, a human rights defender and expert on drug trafficking in the Sinaloa region, highlighted the degree of distrust Mexican public opinion has in police due to their lack of effectiveness.[4] In fact, survey results from Mexico’s National Institute of Statistics and Geography revealed that 69.6 percent of Mexicans over the age of 18 think that Mexican authorities are ineffective in preventing crime.[5] Meza Sandoval argues that this perception among the population has developed because politicians have used government institutions for their own benefit rather than using them to serve the needs of constituents[6]. Drug lords, on the other hand, are sometimes perceived as being more interested in the wellbeing of citizens, aside from also being much more powerful in economic terms. José Antonio Sevilla, an auto mechanic from Sinaloa interviewed by the New York Times, said that “El Chapo is more of a president than Peña Nieto,” referencing the current Mexican president.[7] Genero Reyes Martínez, another Mexican interviewed by The New York Times, went even further when saying that “The government is Chapo’s.” [8]

Citizens such as Sevilla and Reyes Martínez are only two of the thousands of ordinary middle class and lower income Mexicans from Sinaloa that are grateful to Guzmán for all the economic and moral support he has provided them. Many Sinaloa residents speak of how Guzmán has helped families to cover medical expenses of a sick relative and provided people with employment opportunities.[9] René Jiménez Ornelas, a researcher at the National Autonomous University of Mexico (UNAM) argues that Guzmán and the Sinaloa cartel are praised not only for having provided people in the region with jobs and smaller economic favors, but going so far as to pay for holiday, parties and Christmas presents.[10]

Yet, the most alarming aspect of this situation is not necessarily the gratefulness that the Mexican people have for “El Chapo”, but how common it is to find Mexicans whose ultimate aspiration is to become like him. Jiménez Ornelas took this issue even further when suggesting that if you ask Mexican children about their future aspirations, many will say, “I want to be a narco.”[11] On the other hand, Julio Hernández Barros, from the Department of Law of the Iberoamerican University (UIA) has added that “El Chapo” sends the message that “crime pays off,” especially in these regions where the government has done little to cure socioeconomic ills. Guzmán is a sort of legendary character for many, who are inspired by the story of a man who started off as an orange vendor, but was able to gain power and eventually being listed by Forbes as one of the world’s wealthiest men, all while evading the law.[12] Many interpret the moral of this story to be that the way out of poverty is not through law-abiding work, but rather through organized crime. However, the true message at the core of this story is that no matter how many drug traffickers are jailed, unless the problem of socioeconomic inequality is addressed, new drug lords will emerge and low-income Mexicans will continue to see criminal behavior as a means out of poverty.

In spite of the indisputable culpability of the Mexican government, the US government is also deeply responsible for Mexico’s current situation.[13] Much of the socioeconomic inequality present in states like Sinaloa can be traced back to the ratification of NAFTA in 1994 as this trade agreement led to the entrance of subsidized U.S. corn into the Mexican market and consequently the deep erosion of Mexico’s agricultural sector. Although NAFTA was meant to aid the economy, by 2012 a total of 14.3 million more Mexicans were living below the poverty than in 1994.[14] This corresponded with an increase in numbers of unemployed and disaffected young people, many of whom were later recruited by the drug cartels. Despite having contributed to the rise of drug trafficking in Mexico in this way, the United States has not addressed these issues in its fight against the drug cartels.

Instead, it has relied primarily on providing security assistance and intervention and has even collaborated with drug traffickers. The United States collaborated with the Sinaloa cartel between 2000 and 2012 in an arrangement that allowed the organization to smuggle billions of dollars of drugs and provided some criminals with immunity in exchange for information on rival cartels.[15] Despite this, U.S. officials have expressed concern over a lack of Mexicans interested in collaborating with the United States in the recapture of “El Chapo.”

Yet, what the United States fails to consider is that the recapture of “El Chapo” will not make a difference if the demand for drugs remains the same.[16] Currently, drug rehabilitation is a luxury only a select few have access to in the United States.[17] According to the CIA, the United States is the world’s largest consumer of cocaine, Colombian heroin, and Mexican heroin and marijuana.[18] This demand is a strong driving force of the drug trade, therefore Washington needs to re-evaluate its war on drugs and allocate funds proportionally, to not only prosecute criminals, but to also treat addiction as a public health problem by stepping up treatment and rehabilitation efforts. Washington should also consider supporting the Mexican government in efforts to curtail socioeconomic inequality as a means to prevent the expansion of the drug trafficking business and the rise of potential new drug traffickers in disadvantaged communities of Mexico.

By: Laura V. Natera and Sofia Rada, Research Associates at the Council on Hemispheric Affairs