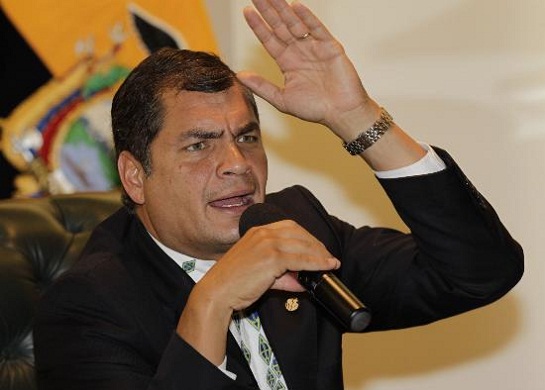 Is Ecuadorian President Rafael Correa really saying that we cannot trust the judicial systems in Britain and Sweden? By granting Julian Assange asylum, he has implicitly stated the British judicial process is flawed and that Sweden is a slavish servant of the US government.

His argument would seem to be that there is a Western imperialist plot to squash and repress any who challenge the ruling political elite. Love him or loathe him, few who know Latin America would deny that Correa is a very bright man and canny political operator. It thus beggars belief that he thinks Sweden, a country with a long tradition of non-alignment, will bow to US pressure.

More to the point, any move to extradite Assange from Sweden would have to go through the courts that consistently refuse to release records on the ownership of anonymous internet fileservers that North American security gurus see as major threats to the national interest.

So what is Correa up to? Why interject his country into such a loaded issue in a way that doesn’t so much tweak British and US noses as poke them directly in the eyes? One likely answer is that granting Assange asylum is a low cost strategy for Correa to maintain stratospheric presidential approval ratings despite persistent poverty in Ecuador. Last year Ecuador exported $139.2 million USD ($133.2m) to Britain, a paltry 0.7 per cent of the country’s total exports. While Ecuador can afford to upset Britain, any move by London seen as violating Ecuadorian sovereignty will receive a harsh response from the politically organized South American nations, including giant Brazil. British self-interest cannot afford this at a time that relations between the U.K. and Latin America are already bedeviled by bad blood over the Falkland-Malvinas pursuit.

The situation with respect to the US is not much different. Relations with Washington remain stable despite sustained provocations. In 2009 Correa delivered a major blow to US drug interdiction policy by refusing to renew the Pentagon’s lease on the Manta airbase in southern Ecuador. This was followed last year with the expulsion of the US ambassador, ironically because of the material released in the WikiLeaks Cablegate.

These provocations and a habitually anti-imperialist rhetoric from Correa had little impact on trade with the US. From 2005 to last year, exports to the US grew by 20.5 per cent. More importantly for Correa’s strategic thinking, the US share of Ecuador’s exports fell from 49.7 per cent to 34.6 per cent, and this trade was concentrated in the fish, fruit and oil that have a ready Chinese market.

The foreign policy and economic cost of provoking Britain and US is thus remarkably low for Correa, allowing him to use Assange to further burnish his anti-imperialist credentials among his domestic political supporters. For Correa, maintaining credibility as a forceful voice against imperialism and a staunch rhetorical critic of the US is a domestic political necessity. His entire agenda is directed towards transforming the political and social structure of Ecuador, which automatically threatens the interests of the established political and economic elite.

Given that the three presidents elected before Correa were belted from office by massive indigenous popular protests or congressional conspiracy, it is hard to argue that there was not a need for constitutional reform in Ecuador. At issue were the twin problems of the near impossibility of electing a congress that would co-operate with the president and the systemic exclusion of the country’s indigenous peoples (25 per cent of the population) and the mixed-heritage mestizos (65 per cent) from real political participation.

Correa wasted little time in pursuing reform after his 2006 election. To facilitate inclusion and break gridlock, Correa called a constitutional convention in 2007, which duly drafted a new magna carta for Ecuador. In 2008, the document was put to a national referendum and approved by 64 per cent of the population as the country’s 20th constitution. The established political and economic elite is not happy and is doing all it can to undermine Correa. Although poverty rates in Ecuador have dropped from 37.6 per cent to 28.6 per cent over the past five years, the political reality is that it is very easy to spin a quarter of the population remaining impoverished as a cataclysmic failure of governmental policy.

Correa’s challenge is to keep his troops enthused and block out negative messaging to the opposition, which owns most of Ecuador’s major media. In this context asylum for Assange becomes an act of diversionary domestic politics, buying time for social programs to have their full effect. Of course, it doesn’t hurt that it also gets Ecuador in the international limelight with Correa cast as a tiny David battling the American and British Goliaths.

This article was modified from its original version which originally appeared in The Australian on August 21, 2012. COHA has afforded its publication in a different format for the purposes of its organization.