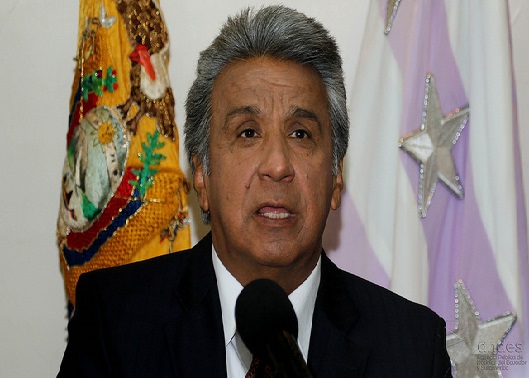 At the time of publication, COHA stands by the findings of the OAS’s International Election Observers in declaring the April 2, 2017 election results fair and legitimate.

Ecuador’s exceptionally long and contentious presidential campaign ended on April 2 with the narrow victory of Lenín Moreno of the leftist PAIS Alliance Party.[i] This year’s election was—for the first time since 2006—a two-stage process (the first round of voting fell on February 19), since no candidate received forty percent of the vote or a ten percent advantage over the nearest rival in the first round. The leading candidate, former Vice President Moreno, achieved a ten-point lead over his nearest rival, but failed to gain forty percent of the vote, earning thirty-nine percent while the conservative CREO Party candidate, Guillermo Lasso, received twenty-eight percent of the vote.[ii]

For many Ecuadorians, Moreno’s popularity leading up to the February election (polls showed roughly thirty-two percent of voters planned to vote for him, while only twenty-one percent indicated that they would vote for Lasso) led to the assumption that the election would initiate a new ascent for socialism in Ecuador.[iii] President Rafael Correa of the PAIS Alliance had been in power since the elections of November 26, 2006, but his heir-apparent did not win the presidency outright. In fact, it would not be until the second round on April 2 that this new reality would take hold. While there has been contention by Lasso and his supporters over the results of this runoff, the OAS’s International Election Observers have verified that Moreno fairly and legitimately received fifty-one percent of the vote to Lasso’s forty-nine, making Moreno Ecuador’s newest president.[iv] As a result, it is necessary to consider how Moreno and his ruling party’s populist left-wing policies (the “Citizen’s Revolution”) will shape the future of Ecuadorian politics.

What Lies Ahead: Ecuador Under Lenín Moreno

Vice President to Correa from 2007 to 2013 and handpicked by his predecessor to run as president in 2017, Moreno has long been a popular figure in Ecuadorian politics.[v] Moreno left office in 2013 with an approval rating above ninety percent, largely as a result of his widely recognized efforts to create government support programs for the disabled, increase government funding for health care and create housing subsidies for low-income citizens.[vi]

Despite his popularity, there have been notable criticisms as well. Moreno has been chastised for his selection of Jorge Glas as his running mate, a figure best described by the Guardian’s Jonathan Watts as a “Correa loyalist who is accused of organizing bribes and kickbacks through the state-run oil company Petroecuador.”[vii] With Glas at his side, Moreno’s reputation for fighting corruption may prove difficult to sell to the public.

Other critics have built off of this argument, expressing concern that Moreno’s loyalty to former President Correa will result in nothing more than a puppet-like echo of Correa’s more controversial policies and personal political style. These criticisms have been relatively marginal, however, compared to the wide-reaching support that Moreno has generated.

As an example of his self-proclaimed authenticity as a humble man of the people, Moreno’s disability (he is paralyzed from the waist down) not only makes him Ecuador’s first paraplegic head of state, but when coupled with his history of devotion to the causes of the disabled citizens of Ecuador gives him an undeniable level of credibility amongst his constituents. As a result, it is logical to assume, as a majority of voters did, that there is merit to his claim that he intends to fight “for people with disabilities, yes, but also for elderly people, women who have been abandoned, domestic workers, children, young people, or women who have been mistreated.”[viii]

But authenticity and character aside, what is to be expected of President Moreno, and what can be learned from his role as vice president during the Correa administration?

On the campaign trail, Moreno vowed to generate “200,000 new jobs, give preferential credit ratings to young entrepreneurs and businesspeople, guarantee access to higher education by creating orientation centers, improve the living conditions of senior citizens through a program called “My Best Years,” and establish dialogue with different political groups.”[ix] But how will he go about turning these claims into action? While he has been questioned by pragmatists about the feasibility of his lofty social policy goals, Moreno has promised since the start of his campaign to be a frugal leader, spending less than his predecessor but hoping to achieve more, especially when it comes to social programs.[x] Moreno’s ability to implement effective reform, however, will rely primarily on his economic plans, which may prove challenging, especially as oil revenues are declining and confidence in the Ecuadorian economy continue to fall.

So far, however, Moreno has given little indication that he will deviate drastically from the policies of his predecessor on this front. On taxes, as one example, Moreno is likely to take after his Correa in embracing an extensive tax policy that allows the government to address inequities, create jobs and provide welfare programs for those in need. Considering Moreno’s past implementation of state-funded disabilities programs, it is very likely that Correa’s tax policy will be upheld.[xi] A move for increased taxes would surely be unpopular with the right, but would not be nearly as detrimental as implementing economic reform at the cost of indigenous lives, an unfortunate yet recurring conundrum in Ecuadorian economic policy.

In the early days of his presidency, Moreno is likely to face the greatest controversy over his decision on whether to protect and preserve Amazonian indigenous lands and their occupants or to turn a blind eye to the displacement of indigenous people by foreign mining companies, a destructive policy which Correa has pursued for years. In early 2017 in the Amazonian village of El Tink, for example, the Chinese mining company Explorcobres evicted native residents and threatened to use violent tactics against protesters. In the wake of this occupation, activists called for Quito to intervene, but no action was taken, and Correa continued to support the efforts of Explorcobres while in office.[xii]  Ultimately, Moreno’s stance on this issue will reveal whether he is willing to place the rights of indigenous people above the corporate interests that have historically weakened the public’s trust in their government.

Finally, and most importantly, if he can successfully implement them, Moreno’s anti-corruption promises will be a vital tool in the reshaping of Ecuador’s political climate. In an era in which major corporate scandals have ensnared politicians throughout Latin America (from Brazil’s Odebrecht scheme to Ecuador’s Petroecuador scandal), Moreno will have to take a hard-line approach to ousting corporate investment in the government as he promised as a candidate. Moreno will truly do his country a favor by becoming more transparent and representative of all citizens.

Looking Ahead: The Future of Ecuador and Latin America’s Left

For Latin America, the election of Lenín Moreno presents an interesting spark in the region’s leftist movement. Moreno’s presidency and his ruling party’s authority in the National Assembly will now provide a continuity of leftist rule at a time when prominent leftist figures of the region are falling from their positions of power. In 2015, the presidency of Argentina’s Cristina Fernández de Kirchner came to an end, while 2016 brought the ousting of Brazil’s Dilma Rousseff and the death of the legendary Cuban leader Fidel Castro.[xiii] In Ecuador, much of Moreno’s leftist presidency will be shaped by Correa’s influence and whether the former president attempts to rule once-removed, or grants his successor the freedom to pursue his own agenda for the benefit of all Ecuadorian people. Ultimately, Moreno’s presidency has the potential to demonstrate the ability of his leftist party to provide for Ecuador’s citizens in a way right-wing regimes cannot, and may ultimate serve as a litmus test for the endurance of key leaders of Latin America’s left.