“The enemies of my enemies are my friends:” Venezuela’s New Economic Partners
The aforementioned political strains have been obvious and have had a direct effect on the choice of Venezuela’s economic partners. After accusing the Chávez administration of at least indirectly supporting the leftist FARC guerilla in Colombia, the U.S. banned the export of weapons to Venezuela and pressured Israel and Spain to do the same. In reaction, Chávez signed a military agreement with Russia. This was but one of the numerous economic ties created by Chávez with countries who shared, to one degree or another his opposition to the United States. All told, 181 bilateral agreements were signed between Venezuela and U.S. designated pariah regime, Iran. Tehran specifically helped Venezuela to institute nuclear research in the country. Furthermore, several rather opaque banking ventures were created with Venezuela in order for Iran to avoid the repercussion of U.S. sanctions against the financing of nuclear-related and other controversial projects such as the Banco Internacional de Desarollo, the Banco Binacional Irán-Venezuela and an investment fund, the Fondo Binacional Venezuela-Irán.

Hugo Chávez repeatedly used his country’s own oil resources to develop new partnerships. For instance, while he was presiding over the Organization of the Petroleum Exporting Countries (OPEC) in 2000, he clearly asserted a desire to make OPEC into an even more powerful economic cartel by calculatedly reducing the world’s oil supply in order to raise prices. Venezuela was also able to win over allies in the Caribbean basin through the PetroCaribe initiative, an agreement that guarantees preferential prices and favorable financing terms for most of the Caribbean countries interested in obtaining Venezuelan oil. In 2004, the Castro brothers and Chávez signed an agreement stipulating that oil sold to Cuba will be discounted by as much as 40% of the world price in exchange for the medical treatment of Venezuelan citizens by brigades of Cuban-provided doctors. This Cuba-Venezuela agreement led to the further creation of the Bolivarian Alliance for the Americas (ALBA, which also means “dawn” in Spanish), an organization clearly seen as meaning to thwart the U.S.-backed Free Trade Area of the Americas (FTAA) project, which would have establish trade rules applicable to all of the Americas except Cuba.

Insignificant Repercussions on U.S.-Venezuela Trade: Bark Not Bite
Despite Venezuela’s new economic stakeholders, the political agitation between the U.S. and Venezuela, and Chávez‘s heavy-handed anti-imperialistic rhetoric, the fundamental economic relation between the U.S. and Venezuela has remained relatively unaffected. The United States is still Venezuela’s preeminent trading partner, accounting for 60% of its exports. Additionally, Venezuela is Washington’s second largest economic partner in Latin America (following Mexico) and the fourth largest supplier of oil after Canada, Saudi Arabia and Mexico. Venezuelan oil accounts for 11% of U.S. oil imports; amounting to 1.5 million barrels sold daily.

The U.S. is the largest consumer of Venezuelan oil (with its production representing 95% of U.S. imports from Venezuela), generating approximately 80% of the country’s export revenue, half of the government’s income and one third of its GDP. The oil industry is a keystone in Venezuela’s economy. What’s more, most of President Chávez’s reforms and social policies are financed by Petróleos de Venezuela SA (PdVSA), Caracas’ state-owned petroleum company and the world’s third largest oil company. The recent oil discoveries in Venezuela now project that it possesses 99.4 billion barrels of proven oil reserves, along with an additional 300 billion barrels of extra heavy oil. The value of the reserves compounded by the spike in oil prices, give an idea of PdVSA’s financial clout and therefore provides a tangible, though incomplete, explanation of the resources that Chávez can call upon.

Oil Sales and Tensions Co-exist
In spite of the tense political atmosphere between the two countries, their bilateral trade has skyrocketed since Chávez was elected, as can be seen from the graph below. One explanation is that the two countries are too dependent on each other to take measures to seriously restrict their trade, despite their mutual bellicose invectives, including such Chávez classics as, “Continue and you will see that we won’t send one drop of oil to the empire of the United States.” It is well known that the American economy heavily depends on oil; therefore, it is logical to presume that if its fourth biggest provider stopped selling petroleum, dramatic consequences would ensue. 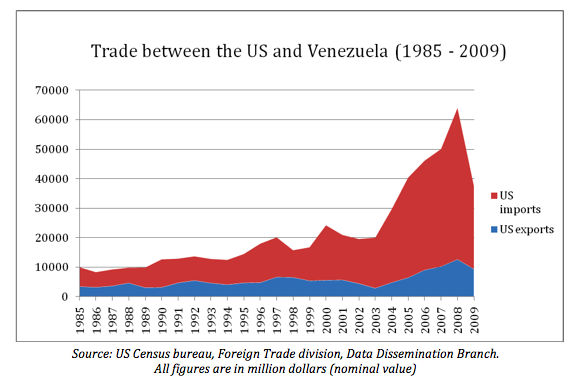 According to the Government Accountability Office, any interruption in the flow of Venezuelan oil would affect the United State’s annual GDP by about $23 billion. The U.S. understandably wants to continue to secure its Venezuelan source of oil in order to guard against any sudden drop in its supply from Saudi Arabia and other Middle-Eastern oil-producing countries. Conversely, despite its affirmation that it was diversifying its oil client list, Venezuela is also more dependent on the U.S. than it claims. Most of the Venezuelan oil extracted from the Maracaibo basin contains a very high concentration of sulfur, which must be further refined in order to be utilized.

The technology employed in this complex process is mainly found in U.S.-controlled refineries. Additionally, the transportation costs are often too high for it to be economically viable for Venezuela to export a major share of its oil to China. Because of this interdependence with the U.S., Chávez’s election did not significantly affect their bilateral trade, in spite of the increasing bad blood between the two countries. The drop in trade in 2009 was due to the global contraction that followed the late 2000s global financial crisis. This was a universal trend not specifically related to U.S.-Venezuela relations. Trade is likely to regain its 2008 level in 2010.

Foreign Companies and the Beginning of Restructuring the Venezuelan Oil Industry
In the pre-Chávez era, Venezuela’s oil operations were marked by the apertura (openness) policies formulated by the former president of PdVSA, Luis Giusti. Those policies facilitated the integration of foreign and local private firms in Venezuela by creating 32 operating service agreements between PdVSA and the above entities. However, recently, Venezuela has moved to undo this framework. The former operating agreements with foreign firms such as ConocoPhillips, Chevron and ExxonMobil were converted into joint ventures in which PdVSA held the majority of the shares. In other words, the investment conditions have been changed and foreign direct investments have been replaced by production-sharing contracts between PdVSA and its foreign partners. Likewise, the tax and the royalty rates were increased on these projects, and in May 2009, the Venezuelan Parliament passed a law awarding the government the power to expropriate oil companies (pending financial compensation). Chevron accepted these new conditions, but ConocoPhillips and ExxonMobil abandoned their stakes, with the latter currently carrying out a major legal dispute with the present Venezuelan government over the issue of compensation for its Maracaibo basin oil investments.

The situation of foreign firms in Venezuela undeniably has worsened since 1999. Once again, though, the nature of U.S.-Venezuela relations may be better than it first seems and very different from what is being portrayed in political speeches made by both sides. First of all, even though PdVSA exercises an overwhelming presence in the country, it does not have a monopoly on the oil industry, as is the case with other major oil providers (e.g. Petróleos Mexicanos of Mexico; Saudi Aramco of Saudi Arabia). PdVSA is dependent on several foreign oil service companies that possess more advanced technology to extract oil from aging wells, like the Houston-based firm Halliburton. Interestingly enough, while Chávez seemed almost pleased by the late 2000 economic crisis, which, according to him, was a precursory sign of the failure of capitalism. Ironically, Venezuela is now suffering from the after effects of that crisis. This crisis compounded by the drop of oil prices has had a dreadful effect on PdVSA, reducing many of the financial resources paying for Chávez’s social policies. Consequently, the Venezuelan government is currently soliciting, under conditions, the return of U.S. firms to invest in Venezuela.

This overall attitude reflects the current state of affairs between Venezuela and the United States. On one hand, Chávez threatens Washington with cuts in its Venezuelan oil supply and strongly disapproves of capitalism (even suggesting the return to a barter-based economy). On the other, there has been relatively few nationalizations and only minor interference with the market in Venezuela. In fact, since Chávez was elected, trade with the United States actually has markedly improved and his so-called anti-capitalistic government has employed investment bank giants like Morgan Stanley and Crédit Suisse as consultants on its economic policy.

The Illusory Fear of a Cold War Revival
The steady and progressive escalation of diplomatic tensions between the United States and Venezuela is probably one of the most important contemporary trends in the Western hemisphere. Venezuela, a former ally of the United States and a country where American soft power flourished for years, has become the center of “Bolivarianism.” Those who fear a revival of the Cold War due to this political shift forget that, contrary to its new economic partners and U.S. adversaries (mainly Cuba and Iran), Venezuela is dependent on the U.S. economy.

One has much to gain by analyzing the U.S.-Venezuelan relation with the “doux commerce” theory, developed in 1758 by the French philosopher Charles de Secondat, baron de Montesquieu, in his Spirit of Laws. In that text he asserts: “Commerce is a cure for the most destructive prejudices; for it is almost a general rule, that wherever we find agreeable manners, there commerce flourishes; and that wherever there is commerce, there we meet with agreeable manners.” Thus, the situation is not likely to sharply escalate further. Despite Chávez’s rhetoric and endless anti-American monologues in his weekly TV show, Aló, Presidente, commerce continues to “flourish” between these two bonded enemies. Economic interests are often stronger than political ideologies in shaping a country’s foreign policy, and perhaps thankfully so, as mutual economic interests are likely to abate further tensions between Venezuela and the U.S. Despite the tense political situation, Venezuela and the U.S remain first and maybe even foremost economic blood brothers.