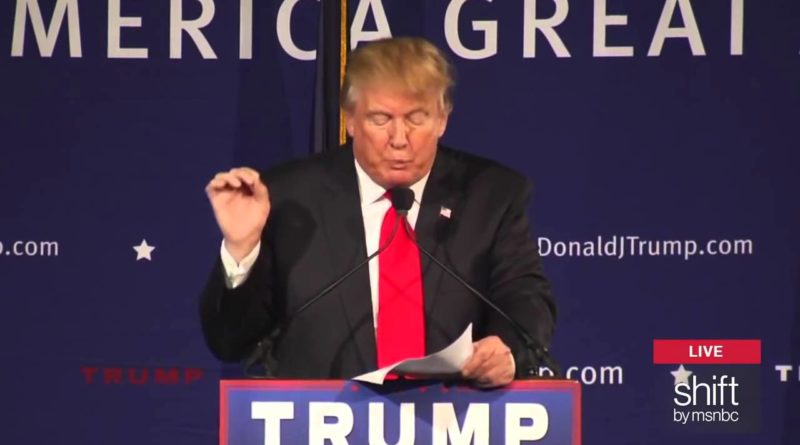 By Esther Fuentes, Mercedes Garcia and Henderson Roman, Research Associates at the Council on Hemispheric Affairs

Yesterday’s Super Tuesday results all but cemented Donald Trump’s path to nomination as the Republican presidential candidate: he was victorious in seven states and gained 285 delegates. As U.S. citizens prepare to decide the nation’s fate, Trump, as the candidate who is garnering the most attention in the presidential race, is resolute to “make America great again” through his proposal of a set of initiatives that supposedly would bring jobs back to domestic soil and would disseminate U.S. power throughout the world. Both his domestic and foreign policy would largely affect the Latin American population in the U.S. — and U.S. relations with Latin America as a whole. Although Trump has not specifically delineated his policy regarding most Latin American countries, his generalizations about Mexico can readily be extrapolated toward his opinions of the region as a whole. His foreign policy stresses the need to construct a wall at the southern border of the United States; his domestic platform, in turn, emphasizes Second Amendment rights, major tax reforms and hostile immigration policies.[1]

One of the hallmarks of his contentious campaign has been his position on immigration issues regarding Mexico. His derogatory remarks about to Mexican immigrants when he announced his candidacy last June set the tone to his controversial campaign:

Trump went beyond generalizing Mexicans.  In regards to the “rapists,” he added, “It’s coming from more than Mexico…. It’s coming from all over South and Latin America…”[3] Such accusations and vagueness are recurrent in this candidate’s campaign, particularly emphasizing that the Mexican government deliberately exports its criminals to the United States[4]. He believes Mexico should be obligated to pay for the construction of a wall along the U.S.-Mexico border because according to Trump, the blame for immigration issues falls on the Mexican government.[5] Such statements triggered a response from government officials in Mexico at the outset of his campaign. The Minister of the Interior, Miguel Ángel Osorio Chong, said, “the remarks by Donald Trump seem prejudicial and absurd,” adding that “”he surely doesn’t know the contributions made by migrants from practically every nation in the world, who have supported the development of the United States”.[6]  Although President Peña Nieto has not been very vocal in regards to Trump´s wall, former President Felipe Calderon denounced it when he firmly stated ¨we [the Mexican people] are not going to pay any single cent for such a stupid wall, and they need to know that…it´s going to be completely useless¨[7]. More recently, Vicente Fox said in an interview with CNN, “He has offended Mexico, Mexicans, (and) immigrants. He has offended the Pope. He has offended the Chinese. He’s offended everybody.”[8]

Donald Trump’s hostility towards Mexico is not limited to immigration, but is also reflected in his foreign policy. Trump is a major opponent of the North American Free Trade Agreement (NAFTA) and the Trans Pacific Partnership (TPP). Although COHA critiqued NAFTA in 2015 as “merely serving U.S. and Canadian interests, while making the rich richer and only providing marginal, geographically isolated benefits to the poor in Mexico,”[9] Trump’s criticism of NAFTA did not stem from a defense of the marginalized population affected by such a treaty. Instead, he believes that NAFTA is destroying the manufacturing sector in the United States and purloining U.S. jobs. Trump proposed tariffs on auto manufacturing that would violate the treaty, and utterly disregards that Mexico is the U.S.’s second-largest export market due to the trade accord.[10]

Aside from opposing the free trade agreement with Mexico, Trump promises to reclaim the jobs that were “stolen” from the Unites States by developing countries, which includes not only Mexico, but Brazil as well.[11] These potential abrupt obstacles to trade could add to the deterioration of diplomatic relations between the United States and Mexico as well as Mexico’s allies in Latin America, were Trump to win the presidency. Apart from Mexico, however, Trump does not have a set policy for how diplomatic relations would continue or evolve with other Latin American countries; his inconsistent foreign policy has instead focused solely on what is tantamount to the destruction of U.S. and Mexico relations.

Despite Trump’s perceptions of Mexico and other Latin American nations as threats to U.S. economy and security, the controversial Republican candidate feels confident that he will obtain more Latino votes.[12]He has even emphasized that he welcomes those Latin Americans who come across the border legally. Moreover, he often references surveys underscoring the support he receives from the Latino community to prove that he has a chance to win this sector of the voting population.[13] However, a survey by MSNBC/Telemundo/Marist released in December 2015 reported that in a national election against Clinton, Trump would face a considerable shortfall of Latino votes, reaching only 27% of them against 69% for Clinton.[14] Although Trump has achieved some support from Republican Latino voters, especially in the Nevada caucus[15], it is important to consider that they represent only a small percentage of the overall Latino vote when compared to the proportion of Latinos voting for the Democratic Party.

Most Latinos are, in fact, concerned about Trump’s performance in the presidential race. His aggressive “immigration reform” goes beyond proposing the construction of a wall; he wants to abolish birthright citizenship for those whose parents are illegal immigrants.[16] Donald Trump is, without a doubt, the face of the anti-illegal immigrant sentiment in the United States, one whose stance is almost xenophobic and should be of great concern not only to Latinos, but to Americans in general.[17] In his foreign policy, he seems to be overlooking how historically and economically relevant the region is for the United States. His superficial assumptions only confirm the lack of interest in strengthening important ties with our southern neighbors. Trump’s hostility towards important Latin American countries—specifically the United States’ neighbor, Mexico—would undoubtedly represent a costly roadblock for the continent’s prosperity if he were to win the presidency.  Moreover, Trump’s victory would also do grave harm to the faith of the already under-esteemed, undocumented Latino population in the United States, which amounted to 11.3 million people in 2014.[18] Such aggressive policies proposed by Trump would drastically alter the dynamics of appreciation for the cultural diversity that makes the United States a great nation. If Trump were to carry on without a significant rival, the consequences could prove extremely costly to the U.S.

By Esther Fuentes, Mercedes Garcia and Henderson Roman Research Associates at the Council on Hemispheric Affairs