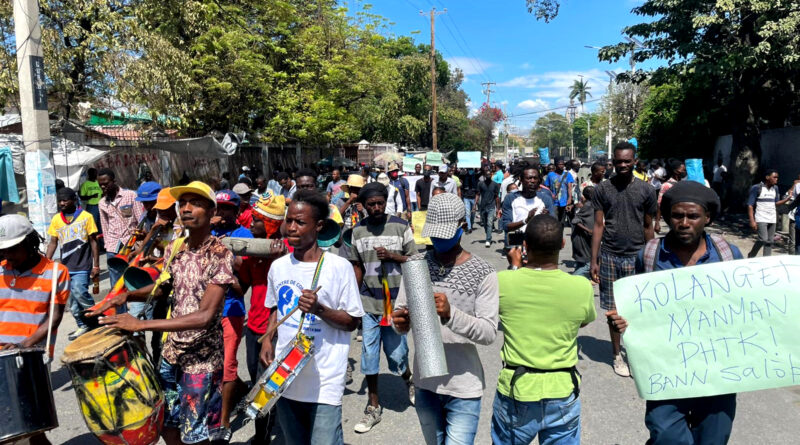 Like Palestinians in Israel and Latino, Asian and Muslim immigrants in the U.S., Haitians in the Dominican Republic are demeaned, harassed, and victimized in both extraordinary and mundane ways.

Pushed out of their homeland by centuries of neo-colonialism and exploitation, officially 751,080 Haitians call the Dominican Republic home. This is 7.3% of the official population. There are hundreds of thousands of other Haitians who are deemed “illegal” and do not appear in any statistics.

“Antihaitianismo,” or anti-Haitian racism, is but one glaring symptom of the economic and political elites’ mind-set in the Dominican Republic.

This article will highlight the ideological, historical and political dimensions of  anti-Haitianism to show how the Dominican state, whose policies are reminiscent of apartheid, has a vested interest in harassing and scapegoating the Haitian population.

“To Improve the Race”

For decades, the Dominican people have been flooded with both intense and subtle propaganda denigrating Blackness and “Haitianidad,” depicting Hatians as “the other.” One of the pillars of the ideological legacy of Trujillismo and Balaguerismo was hispanophile, that is the exaltation of  Spanish heritage, which is also a way to celebrate what is white and European.

Here are a few examples of “casual” anti-Haitianism. Some Dominican parents jokingly threaten to send their kids in a sack to a Haitian boogeyman if they misbehave. Haitians are accused of stealing animals, or even children, and sacrificing them. In the mass media, Haitians are identified with hunger, infectious disease, political turmoil, and “black magic.”

Imbued with a certain myth of their cultural and racial superiority, too many Dominicans have turned their backs on the Haitian language, history, and culture. Talk about “good hair” and “improving the race” by marrying someone lighter-skinned remains common.

Popular educators from groups like Acción Afro-Dominicana and Agenda Solidaridad work hard to reeducate the Dominican population about the Haitian reality and raise awareness of the dangers of anti-Haitian hysteria.

Dominican Presidents Danilo Medina (2012-2020) and Luis Abinader (August 2020 to the present) have invested substantial financial and human resources into persecuting Haitians who came to the Dominican Republic. These presidents have engaged in the same practices as their predecessors dating back to Trujillo.

Military checkpoints, one every few miles, line the route towards the interior of the Dominican Republic. National Guard searches of public transportation serve to publicly humiliate Haitian migrants and remind them of their status as unwanted visitors. The Dominican military intentionally provokes Haitians by aggressively searching through their belongings, mocking their language, dress, and skin color, and demanding that they pay ridiculous fines. Dominican state police have converted crossing the border and traveling into the interior into a business fueled by bribes and corruption. The most aggressive guards carry out illegal deportations and beatings if Haitians do not give in to extortion. Rhetoric about the need to patrol for Haitian arms, drug traffickers, and “illegals” serves as the eternal justification for this aggression.

Even Dominican citizens sometimes contribute to this persecution. One Sunday afternoon on a bus returning from the border town of Jimani, the author of this analysis witnessed a young Haitian man being forced from the front to the back of the bus on the charge that he had “el grajo,” or body odor. A group of Dominicans waved their hands in front of their noses as if to say that he could not sit close to them. The man was robbed of his right to take an empty seat on an eight-hour bus trip.

In counterpoint, the Dominican population is trained to be servile and obedient to German, Spanish, Italian and North American tourists. White Western “grajo” is an afterthought and not a bias permanently attached to one’s ethnic identity.

The dynamics of “el grajo” is just one element of an aggressive fear of Haitians that goes against the humble nature of the vast majority of people and secures their role as the carriers of a “necessary” racism. “Necessary” because as long as Haitians are viewed as sub-human, they can more effectively be exploited. Racism provides the cloak and justification for their super-exploitation.

The Dominican state apparatus has assumed the leading role in labeling, stereotyping, and scapegoating the Haitian community. The principal figure behind  anti-Haitianism was former president Joaquín Balaguer, who dedicated his intellectual and literary talents to defaming Haitians. In his book “La isla al revés,” Balaguer stomps vulgarly on the dignity of Haitians, absurdly blaming them for the spread of venereal diseases across the Dominican Republic, among other things. He plays on Dominican society’s historical paranoia that Haitians will try once again to unify the two countries under one government as happened from 1822 to 1844. Inaccurate recounting of Dominican history under Haitian military rule is still used today to whip up anti-Haitian hysteria. In truth, the Haitian occupation brought freedom to Dominican slaves and broke up the monopolization of land and wealth by the colonial Spanish power and the Catholic Church. In the words of Dr. Silvio Torres-Saillant, “many marginalized Dominicans lived better with the unification than they did before under Spanish rule.”[1]

Any mention of the Haitian occupation today in the Dominican Republic begins with a wild tale of vicious Haitian soldiers throwing children into the air and chopping them up with their machetes as they fell. There must be a resistance to this distorted historical memory to rescue the Dominican and Haitian people’s history of solidarity. Haiti never colonized the Dominican Republic. This 22-year period deserves intense historical examination.

What is Behind the Wall?

As the Haitian people rise up in 2021 against dictatorship and neocolonialism, the Dominican Minister of Foreign Relations, Roberto Álvarez, announced that his country has embarked on the construction of a 118 mile wall on its border with Haiti. In his annual 2021 State of the Union address, president Luis Abinader lauded the wall without mentioning once the historic struggle the Haitian people are engaged in. The estimated cost is over $100 million dollars. In the year of a pandemic, where tourism, construction and remittances have taken a serious hit, it is hard to believe that this is the economic priority of the Dominican government.

These same mouthpieces of the ruling consensus, who feign concern about the welfare of “the Dominican nation,” are silent when it comes to the millionaire class that are the true masters of the nation. Ruling families like the Corripios, Bonettis and Vicinis control some billion dollars of investments in the central arteries of the Dominican economy like construction, tourism, cacao, energy, and tele-communications.

According to Oxfam, there are 265 millionaires in the Dominican Republic. To give a sense of what it means to be a millionaire in a country affected by widespread poverty and exclusion, a Dominican from the poorest 20% of the country would have to work 214 years to be able to earn what one of the 265 Dominican millionaires earns in a month. The study concludes: “The accumulated wealth of these 265 people is equivalent to 13 times the annual public investment in education, 17 times the public investment in health, or 49% of GDP.” Motivated by political opportunism, far-right careerists like Joaquín Balaguer, Vinicio Castillo, and Pelegrín Castillo have constantly attacked Haiti.

The Haitian people have long served as the easiest whipping boy in the Dominican Republic. They are blamed for many things, including disease, unemployment, and social crises. If it were not for these ideological escape valves, the political actors who develop these narratives would have to invent another enemy or confront the structural dynamics of gross class and national inequalities in the Caribbean region. The two nations do not need a wall; they need economic, educational, and diplomatic bridges of solidarity. It is the role of the Dominican people to build these bridges and complete the unfinished revolution that the Mirabal sisters, Caamaño, Mamá Tingó, Orlando Martinez, and so many others fought and died for…

[1] From a speech at a conference on Dominican Independence at The Malcolm X and Dr. Betty Shabazz Memorial & Educational Center in Uptown Manhattan in 2016.