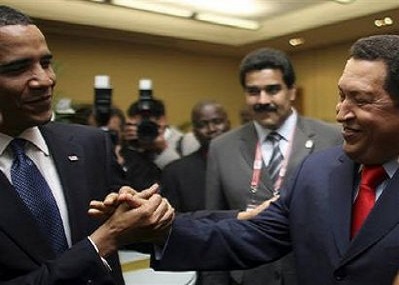 On July 17, President Trump declared that “The US once again calls for free and fair elections and stands with the people of Venezuela in their quest to restore their country to a full and prosperous democracy.”[i] Secretary of State, Rex Tillerson, also has called for a “transition to democracy” in the South American nation. A Senate bill introduced in May by Senator Cardin asserted the need for democracy in Venezuela and proposed that the United States Agency for International Development (USAID) lead the effort to distribute food and medical supplies to the beleaguered nation.[ii] The bill was co-sponsored by eight senators on both sides of the aisle.

Despite their rhetoric in favour of democracy as well as economic assistance to the Venezuelan people, the United States’ priority is the same as it has been since Chavez’s democratic election in 1998. The removal – at any cost – of the government that sought to break U.S economic hegemony in Latin America. Senator Marco Rubio went so far as to threaten to cut U.S aid to Haiti, El Salvador and the Dominican Republic if they didn’t vote for sanctions against Venezuela at the Organization of American States.[iii] Assertions of the need for democracy are deeply hypocritical given repeated attempts by the U.S government to undermine and remove the Chavez regime, while exhibiting a tacit endorsement of violent opposition in the process.

The United States has a long history of using its economic might and covert operations as a tool to topple leftist governments across the hemisphere, and Venezuela is no exception. Declassified documents have revealed that “it is clear that NED [National Endowment for Democracy], Department of Defence (DOD), and other U.S. assistance programs provided training, institution building, and other support to individuals and organizations understood to be actively involved” in the failed coup against Chavez in 2002. When the businessman, and brief president of Venezuela, Pedro Carmona, temporarily seized power, Washington quickly endorsed the illegal coup d’état in Caracas. These actions certainly do not represent the United States’ purportedly high-minded goal of bringing democracy to Venezuela, or its self-proclaimed status as the leader of the free world.

The United States has also funnelled tens of millions of dollars of “aid” to Venezuela giving backing to a series of anti-government groups. Chavez also overwhelmingly won the 2004 recall referendum on his presidency with 58 percent of the vote. His victory was somewhat undermined when the NGO Sumate, a polling organisation, released an exit poll placing Chavez 18 percentage points behind. Sumate had played a key role in lobbying for the referendum. Both the Organization of American States and the Carter Foundation monitored the vote and declared it to be free and fair. President Carter himself has accused Sumate of deliberately publishing this skewed data, despite a ban on releasing any polling before results were announced, to influence voters and help propagate false allegations of fraud.[iv] A leaked document from 2005 reveals a directive by then President Bush to make $3 million USD available to the organization to, “help us continue to catalyse Sumate’s efforts.”[v] Another document reveals that the NED provided over $30,000 to the NGO, and when its heads were facing prosecution it was seen as, “a blow against Sumate and [United States] interests in Venezuela”.[vi]

After the United States failed to back the coup and delegitimize Chavez’s re-election in 2004, they continued to attempt to undermine democratic rule in Venezuela. Another leaked cable from 2006 laid out Ambassador William Brownfield’s plan for the democratically-elected government, in the lead up to the 2006 Venezuelan election, as follows:

President Trump has also given implicit support to the opposition leader, Leopoldo Lopez, meeting with his wife in the Oval Office. Lopez, shortly before his transfer from prison to house arrest, sent out a mobile video urging the military to overthrow President Maduro, claiming that they “have the right, and the duty, to rebel”. If not democratic then Lopez is at the very least pro-business. This is something that will no doubt hearten Secretary Tillerson who, as CEO of Exxon, oversaw the company’s loss of around $10 billion USD when Chavez expropriated foreign oil assets in 2007.

The condemnation by U.S. politicians of violence during protests in Venezuela is ironic given the fact that leaked files reveal that Eduardo Fernandez, while working for the private development firm Development Alternatives, Inc., (DAI), described the leaders of violent right-wing protesters in 2009 as “our grantees”.[viii] The majority of DAI funds are provided by USAID. Other files show that the State Department invited Nixon Moreno, a right-wing student torchbearer, as a “young leader” to an International Visitors Program in 2004.[ix] This is despite the fact that the government was aware that Moreno had led a mob in the town of Merida “who marched on the state capital to lynch MVR governor Florencio Porras,” during the April 2002 coup.[x]

The U.S has repeatedly supported violent opposition to the Venezuelan Government and has time and again shown its disregard for Venezuelan sovereignty and democracy. There is no reason to treat current demands for democracy and for access of USAID to Venezuela as anything more than a continuation of long term U.S policy to remove from power any Latin American government that attempts to oppose U.S dominance of the region, and promote Latin American autonomy and independence.