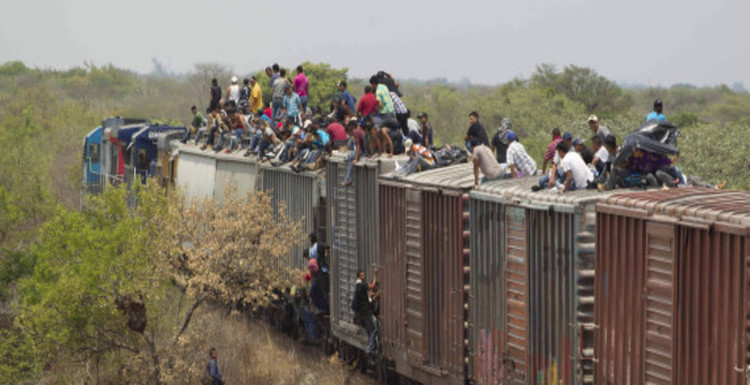 By James A. Baer, Senior Research Fellow at the Council On Hemispheric Affairs

Citizens of the U.S. and Europe have been faced with large numbers of immigrants who enter their countries illegally or overstay their visas. The issue is divisive and politicians from all ranges on the ideological spectrum have argued about the relative dangers or merits of policies on illegal immigration. The largest number of illegal immigrants to the United States comes from Mexico and Central America, and the recent arrival of unaccompanied children from Central America became a major political issue. However, there is a growing problem of illegal immigration within Latin America, especially as migrants seek economic opportunities in neighboring countries. Argentina, Brazil, Chile and Mexico all have significant numbers of illegal immigrants and have passed new immigration laws to deal with the problem. The number of illegal migrants in Latin America exceeds two million. However, that is nowhere near the approximately 11 million undocumented immigrants to be found in the United States. The measures taken by Latin American countries reflect their circumstances and cultures and do not provide a complete answer for the United States. Nevertheless, the tactics utilized by these Latin American countries present alternatives to many of the proposals currently being considered in the United States.

Argentina is a country of immigrants, with most of them coming in the era of mass migration from Europe to the Americas in the last decades of the nineteenth century and the beginning of the twentieth century. Argentina was sparsely populated and needed immigrants in order to develop. Its government welcomed European immigrants, originally offering to pay the steamship passage. Between 1895 and 1914 the population of Argentina doubled from 4 million to 8 million. Smaller waves of immigration continued in the 1930s as Jews and others fled totalitarian regimes in Europe. Displaced persons and refugees from WWII came in the 1940s. Since the middle of the twentieth century immigrants have come from the countries on Argentina’s borders. The average Argentine worker makes three times as much as the average Bolivian worker. This ratio is similar to that between American workers and Mexicans and has led to migratory flows from Bolivia and Paraguay into Argentina. Many of these migrants came without documentation or overstayed their work permit and settled in Argentina. According to the 2010 census there are about 1.5 million undocumented immigrants residing in Argentina, accounting for about 4.5 percent of a national population of 35 million. By comparison, the 11 million illegal immigrants represent 3.5 percent of the U.S. population.

Immigration laws in Argentina before 2003 allowed the government to restrict benefits and to deport illegal immigrants. There were fears that these illegal immigrants were taking jobs away from Argentine citizens and draining the government of funds through the services they were receiving. In the late 1990s the government of Peronist president Carlos Menem proposed harsh new legislation to stem the flow of undocumented immigrants. The bill considered by Argentina’s congress would have made it a crime to employ or assist immigrants to enter the country without proper documentation and authorized the Minister of the Interior to deport any illegal immigrant convicted of a crime that led to more than two years in prison. Opponents of this legislation pointed out that these undocumented immigrants often paid no taxes because they were paid informally, that they might be unwilling to report crimes or assist authorities and that their lack of documentation made them harder to count or track.

The 2001 financial collapse of the national economy led to increased unemployment and continued fears about the overall cost of illegal immigration. However, in 2003 the Argentine government under the Peronist president Néstor Kirchner passed law 25,871 that declared immigration to be a human right. Article 4 states, “The right of migration is essential and inalienable of the person and the Argentina Republic guarantees what is based on the principles of equality and universality.”

The 2003 immigration law gave undocumented immigrants the right to legal representation and allowed them to receive educational and health benefits. One of the major goals of the measure was to insure the unification of families split apart by immigration and to make it easier for them to receive proper documentation. The fear that increased numbers of immigrants might try to settle in Argentina due to its lenient immigration laws was mitigated by the improving economy that absorbed additional workers. There was no great influx of immigrants and many of the recently-documented took low-level jobs most Argentines were unwilling to perform. Many of the once-undocumented immigrants now have proper documentation and can work legally. They pay taxes and contribute formally to the national economy. Access to education and health services has meant that these immigrant families are healthier and their children are gaining an education. Nevertheless, not all undocumented immigrants chose to identify themselves publically. There are still an uncertain number who prefer to work outside the formal system, buying and selling in cash and paying less in taxes. The impact of the immigration law has largely been positive, although recent economic difficulties may have limited the number of immigrants entering the country, legally and illegally. The issue has not been completely resolved, since large numbers of illegal immigrants remain in Argentina.

Brazil has become an economic powerhouse in South America, although recently its economy has noticeably slowed. A country of immigrants, like the United States and Argentina, Brazil received large numbers of Europeans, mostly from Spain, Italy and Portugal as well as Germany. In addition, at the beginning of the twentieth century many Japanese immigrants settled in Brazil. In recent years, well-educated Europeans and citizens from the United States have migrated to Brazil to work in its high-tech and financial sectors. However, there is a continuing problem of illegal immigration, especially through the Amazon region, where borders are often ill-defined. Between 1,200 and 1,500 Bolivians have been entering Brazil every month, and Haitians have become one of the larger groups of illegal immigrants. An August 2014 article in The New Yorker described how Haitians pay smugglers up to $4,000 USD to take them on a three-month journey into the Amazon region and into Brazil.[1] The International Business Times reports that illegal immigrants are also coming from Senegal and Nigeria into Brazil.[2] Some Bangladeshis are so desperate that they pay $10,000 USD to be smuggled into Brazil.[3]

The issue of illegal immigration was addressed in 2009 by then-President Luiz Inácio Lula da Silva, called “Lula,” who granted amnesty to approximately 42,000 illegal immigrants with Law 11.961/2009. The groups benefitting from this amnesty are: Bolivian (16,000), Chinese (5,000), Peruvian (4,000) and Paraguayan (4,000), most of whom reside in the country’s largest city, São Paulo. The amnesty law provides a two-year period of legal residency and work, with the option to apply for permanent residency, and gives them all the rights of Brazilian citizens to education and health services. Brazilian law refers to undocumented immigrants as “irregular,” rather than illegal. Like earlier amnesties in 1988 and 1998, when tens of thousands were “regularized,” the amnesty of 2009 did not completely stem the flow of illegal immigrants into Brazil. The growing economy may have absorbed some of these illegal immigrants. Occasional amnesties may work for Brazil, since the numbers are small relative to the population of the country, which stands at 202 million. However, these amnesties have not stemmed the flow of undocumented immigrants into Brazil.

Immigration has been an important part of Chile’s growth, with a large German population in the south. However, immigrants have never made up as much of Chile’s population as they have in Argentina and Brazil. In the late twentieth century, many illegal immigrants came into Chile from neighboring Bolivia and Peru. The stream of Peruvian migrants has been especially troubling, since many are women who have left their families behind to work as domestics in Chile. The concern over immigration was reflected in the 2007 Latinobarómetro study that, “ranked Chile 15th out of 18 Latin American countries on openness to migration; only about one-third of those surveyed (35 percent) agreed that foreigners should have the same rights as natives.”[4] Chilean president Michelle Bachelet granted amnesty to about 50,000 illegal immigrants between 2007 and 2008. Her government ratified an international convention on migrant worker rights regarding education for children and access to healthcare regardless of status. Chile recently instituted a “Borderlands Card” that allows residents of neighboring countries into Chile for business or travel. In the past several years immigration to Chile has increased, making the issue of illegal immigration a difficult one to solve because it deals only with one aspect of the role of immigration in Chile.

Mexico is regarded by many Americans as the country of origin of most illegal immigrants into the United States. And yet, Mexico is also a country struggling with large numbers of illegal immigrants. Many of these migrants are Central Americans making their way north with the hope of illegally crossing into the United States. Problems associated with this migratory flow include crime and public health issues as large numbers of migrants are robbed or attacked. There is also a public health issue, since these migrants may spread disease as they come into contact with Mexicans. Over the past several years a mounting recession in the United States and an expanding economy in Mexico have slowed the flow of Mexicans into the United States. Now, the government of Mexico is considering the creation of stronger border controls to stem the numbers of migrants entering Mexico illegally. The Mexican government enacted the General Law on Population in April 2000 which made it a crime to enter Mexico illegally. Punishments ranged from two to ten years in prison, and local police were required to work with federal police to apprehend illegal immigrants. This law was superseded by the May 2011 Migration Law which allows refugees to request asylum and regulates the ability of authorities to detain illegal immigrants. It is Mexico’s first comprehensive migration law and has not criminalized the act of illegal entry. In 2012 Mexico detained about 88,000 migrants and 79,000 of them were deported. But with approximately 300,000 entrants yearly, Mexico’s population of undocumented migrants is estimated to be just over 1 million.[5]

Each Latin American country has specific issues with migrants coming from bordering countries and remaining illegally. Argentina’s approach reflects the strong tradition in Latin America of sanctuary and recognizes immigration as a human right. The key has been reunification of families and the desire to bring this population out of the shadows. Brazil has offered amnesty on a number of occasions. Each time, a cohort of illegal immigrants is brought into society and integrated. However, more illegal immigrants then appear, so amnesty alone does not deter illegal immigration, but regularizes their status once in the country. Chile faces increasing pressures from immigrants, among them many Peruvian women whose families remain in Peru. The government of Michelle Bachelet gave amnesty to tens of thousands and instituted a “Borderlands Card” to regularize border crossings. Mexico, faced with transients from Central America and China headed to the United States, has tried to clamp down on illegal immigration and strengthen its border security. The United States, which has the greatest number of illegal immigrants, has been unable to establish a policy, leaving the president to enact a series of piecemeal responses. The government of the United States may not be considering amnesty or immigration as a human right. However, a comprehensive policy must be enacted to deal with the issue, and understanding the variety of approaches in the Western Hemisphere may be helpful.

By James A. Baer, Senior Research Fellow at the Council On Hemispheric Affairs

[4] “Chile: A Growing Destination Country in Search of a Coherent Approach to Migration,” Immigration Policy Institute, June 6, 2012. Accessed on September 17, 2014 at http://www.migrationpolicy.org/article/chile-growing-destination-country-search-coherent-approach-migration