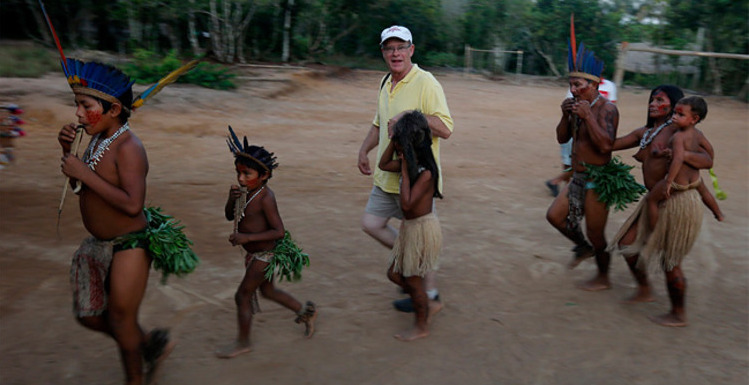 By: Grace Kranstover, Research Associate at the Council on Hemispheric Affairs

Indigenous populations compose an estimated 370 million people in the world today and are often central to a state’s culture and history. Indigenous people comprise five percent of the world’s total population and live in approximately 90 countries.[1] However, indigenous people also make up 15 percent of the globe’s impoverished population. This is especially true in Latin America, where 40 million indigenous people live in rural areas, often below the poverty line.[2] Yet, as travel to Latin America has soared in the past few decades, tribes living in the region have a newfound source of income in tribal tourism, an emerging industry. However, the social and moral implications of this form of tourism must still be explored.

Tribal tourism refers to a new form of travel in which tribes allow tourists to visit their villages in order to be “exposed to a culture completely different from [their] own.”[3] In recent years, this opportunity to experience “authentic” indigenous life has grown in popularity across the globe. This holds true for Latin American nations with large indigenous communities, such as Peru, Brazil, and Guatemala. One positive outcome from increased tribal tourism has been the financial opportunities that have been created for many tribes. Additionally, tribal tourism has helped foster greater awareness of indigenous people, many of whom face oppression, forced land relocation, and challenges to social and economic integration.

Yet, the social consequences of tribal tourism are more detrimental than beneficial. In regions where tribal tourism has become especially popular, the cultures of some indigenous villages have undergone changes that have turned some important spiritual rituals into spectacles. For example, in the native Guatemalan community of Santiago near Lake Atitlán, where the revered pre-Christian deity Maximon has become more of an attraction than a spiritual figure. Traditionally, Maximon emerges from his shrine once a year during Semana Santa, or Holy Week, for various parades and festivities. However, since tourists have started to come to the area, many visitors have begun paying the guardians of the memorialized deity with money or alcohol to see him throughout the year. This has turned Maximon into an exhibit tourists now disrespect; for example, some tourists have even dressed the deity in Mickey Mouse ties.[4] For many indigenous natives, these displays have degraded the meaning of their tradition.

Tribal tourism has also had a negative impact on indigenous populations that do not wish to be contacted by the outside world. The Guardian estimates that there are about 100 indigenous tribes that have chosen to live in complete isolation around the world.[5] Because of the growth of tribal tourism, many tourism agencies have sought to exploit these secluded indigenous populations. Investigative journalists from The Guardian have also found that some tourism agencies are willing to force contact with isolated indigenous tribes, like the Mashco-Piro in Peru’s Amazonian rainforest, if clients are willing to pay enough money.[6]

Scientists and indigenous rights organizations have expressed concern and condemned any agencies offering this service. Two main factors have prompted many to call for immediate government action. One factor is the fear of spreading diseases to secluded tribes like the Mashco-Piro that cannot defend themselves because of their unexposed immune systems. Another is putting the tourists themselves in danger of being attacked by frightened indigenous people, as has occurred with the Mashco-Piro before.[7] “We need governments to act to protect indigenous communities, tour operators need to follow a code of conduct, and tourists need to be educated and informed,” stated Mark Watson, director of Tourism Concern, an organization committed to fighting exploitation from tourism.[8]

The question remains of what can be done to make tribal tourism more ethical and to protect indigenous tribes from foreign exploitation. Most important, perhaps, is educating visitors about the negative effects that tribal tourism can have on indigenous communities. One tourism website dedicated to responsible vacationing suggests that travelers who wish to participate in some form of tribal tourism educate themselves on the tribe they wish to visit and make sure that any monetary payments go directly to benefiting the indigenous people.[9] Tourism expert Justin Francis suggests that being constantly aware of any social interactions between indigenous tribes and visitors, whether positive or negative, is also very important.[10] At a more formal level, governments must also take steps towards passing laws and regulations that protect indigenous communities from exploitation. Until such serious measures are taken, indigenous cultures will continue to be at risk and in danger of changing forever.

[5] Vidal, John, “Are We Here Just For Your Amusement?,” The Guardian, http://www.theguardian.com/travel/2009/jul/25/tribal-adventure-ethical-tourism-jarawa (accessed July 2, 2014)