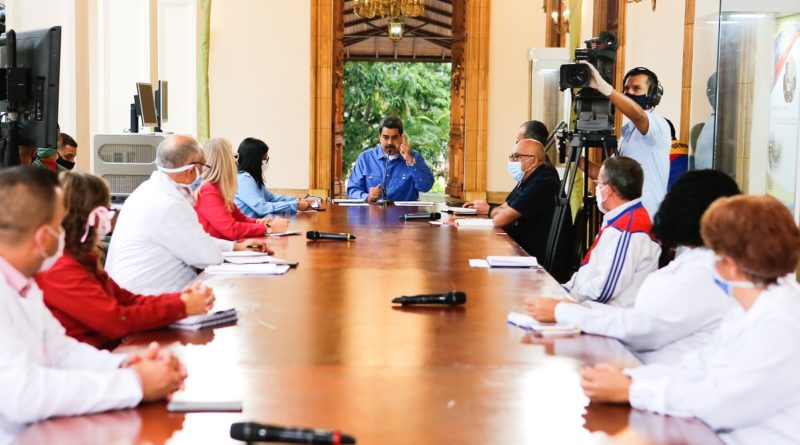 In the midst of the public health emergency ripping through the world, the United Nations and progressive forces throughout the Americas have called for a unified effort, transcending ideological differences, in defense of human life in the face of the COVID-10 pandemic. Russia and China have answered this call by providing logistical and material support to both third world and first world nations, including Europe and the United States. Cuba has continued to deploy its international medical mission in those countries hardest hit by the novel coronavirus.

Yet, Washington not only continues to impose economic sanctions which block urgently needed medical supplies to Venezuela and other nations which resist US domination; the US is now threatening military intervention against Caracas in a bid to overthrow the constitutional government of President Nicolás Maduro.

Venezuela now faces a perfect storm. At this moment thousands of Venezuelans seek repatriation. The US economic war has intensified, with a naval blockade underway to maximize the collective pain. Hostile paramilitary groups are training in camps along the Colombian-Venezuelan border. A dearth of chemical additives has caused a gasoline shortage; and the novel coronavirus has now spread to some of the popular barrios of Caracas. All this is happening at the very time a dialogue between the government and moderate opposition has been making significant progress and legislative elections are being planned for later this year.

President Maduro, facing an increasingly bellicose posture by the United States military, has written to the US American people urging peace and cooperation. It appears that Washington does not want to give mutual respect and co-existence a chance. Given the recent US–Colombian military exercises and the US naval presence off the coast of Venezuela, Caracas is bracing for some sort of provocation or false positive that could ignite an escalating conflict.

Intrigue on the High Seas

According to Venezuelan authorities, on March 29th, at 23:55, close to the Island of La Tortuga, the Coast Guard spotted and established contact with the German-owned Resolute cruise liner.[1] La Tortuga is 85 kilometers from the state of Miranda.[2] Following diplomatic protocols, the Venezuelans inquired as to why the unauthorized ship was in its territorial waters. The responding captain speaking in English reported that there were “thirty two crew” on board, according to audio that has been released. The captain of the Resolute ignored the Coast Guard’s orders “to detain their movement.”[3] According to Venezuelan Navy Commander Giuseppe Alessandrello, the Coast Guard boat, the Naiguatá, then intercepted the cruise liner and sought to lead it to the closest Venezuelan island to inquire about its destiny. The Venezuelan’s followed a gradual escalation protocol which ultimately involved firing warning shots. The cruise ship which flew the flag of Portugal switched course abruptly and intentionally rammed the coast guard ship several times with a force of 8,400 tons. The purpose-built polar expedition vessel with the capacity to break ice in the Arctic intentionally sank the Naiguatá. Amidst the pandemonium, someone fired shots from the foreign vessel. With the sailors jumping from the capsized ship and life jackets scattered in the ocean, the Resolute fled towards Curaçao.[4] They shut off their Automatic System of Investigation until they arrived in that Dutch colony. The Venezuelan sailors survived because of their training and the prompt arrival of their comrades in other boats to save them.[5]

The BBC and CNN ran headlines claiming that the Venezuelan coast guard intentionally rammed into this innocent cruise liner and fired on the tourists. CNN waited several days before even picking up the story.[6] The BBC reported that Columbia Cruise Services-operated Resolute, “was carrying out routine engine maintenance”[7] when the Coast Guard slammed into it. As if the Venezuelan leadership suffered from unfounded paranoia, the BBC wrote “President Nicolás Maduro has previously accused the United States and other countries of plotting to overthrow him.”

The confrontation raises a number of questions. Why was a cruise liner touring the Caribbean during the coronavirus pandemic? With Trump’s highly publicized announcement of encircling Venezuela with the US Navy because of supposed “drug concerns,” what cruise ship would recklessly drift so close to Venezuela?[8] Why didn’t the Resolute heed orders and follow international protocols even after the Coast Guard warned they would escalate and use force if necessary? Were there mercenaries aboard? The Venezuelan leadership has not concluded its investigation. Since this incident occurred in the context of a US naval presence, the Bolivarian militias and the entire civic-military alliance have been placed on high alert. [9]

On March 26th, Attorney General William Barr announced the Department of Justice’s indictment of Nicolás Maduro and other Venezuelan leaders for “narco-terrorism, corruption, money laundering, and drug trafficking.”[10] On April 1st, Trump sent the US navy “to crack down on “counter-narcotics operations, [and] also aimed at denying funds to Maduro and his closest allies.”[11]

The mainstream media has echoed the far-right’s preposterous claim that Venezuela has been charged with flooding America’s streets with drugs.[12] Breaking with the official line, a Newsweek article challenged the administration’s argument that the US Navy is taking up these aggressive positions to stop drug smugglers from capitalizing on the coronavirus pandemic to send more drugs to the US. According to Newsweek, the White House shifted its messaging: “Rather than saying the mission was intended to stop traffickers from exploiting the pandemic, an official linked it to stopping the proliferation of the disease.”[13] It is striking that the mainstream media has not made more of the fact that most of the production and export of cocaine come out of Colombia, a close ally of the US. ,[14]

As the U.S. intensifies its military and economic threats and attacks on the Bolivarian revolution, Venezuela faces a humanitarian challenge– the return of thousands of its citizens from neighboring neoliberal states. At a time when all nations need maximum solidarity, xenophobia and economic hardship faced by Venezuelan immigrants in Peru, Chile, Colombia and Ecuador, have led to a growing exodus back to Venezuela.

Around 1.8 million Venezuelans now live in Colombia. Since many of these immigrants work in the informal sector, they receive no assistance as these markets are either reduced or closed on account of the coronavirus pandemic. Many Venezuelans have found themselves without  a source of income, which on average was a mere $8 a day, and without public assistance.[15] Now that public buses are shut down, if the Venezuelan government cannot offer transportation, many are braving the elements and walking back to their homeland. The Colombian government has not offered any food, water or transportation to families gearing up for the two to three-week journey home. Bloomberg news reported on the arduous trek back but ignored the xenophobia and the role the US-led international blockade had on creating this refugee crisis.”[16]

In response to the flow of returning Venezuelan immigrants in a time of pandemic, the Maduro administration has set up testing sites on the border to determine who may be carrying the virus. [17] Authorities announced “The Bolivarian Shield Safe Health 2020” plan to provide housing and COVID-19 testing for the thousands of Venezuelans crossing the border.[18] Those who test positive will be referred to Centinelas Hospitals and those who are asymptomatic will stay in one of 21 hotels in the state of Táchira. As of right now, Venezuela has a relatively low number of COVID-19 positive citizens at 165, and 7 deaths.[19] Medical officials are taking the utmost care to ensure that the influx of returning refugees does not introduce hundreds of new contagious individuals into the population.

These refugees, of the economic sanctions and depressed oil prices which have stalled Venezuela’s efforts to implement more economic reforms, are returning without any illusions about the inhospitable conditions which they had to endure in their host countries. Maduro sent Conviasa planes[20] to retrieve 100 Venezuelans who voluntarily returned from the Dominican Republic.[21] He offered to do the same for any Venezuelans in the US who wanted to return, stating: “We are keeping track of all of our countrymen and women who are victims of xenophobia and have decided to return to Venezuela, their homeland. We extend our arms to you as we have millions of people who have found in our country peace and hope. Welcome home!”[22] Trump ignored the offer.

The Bolivarian Shield Safe Health effort is consistent with Venezuela’s nationwide effort to contain the spread of COVID-19. Not only is there a national quarantine, the government is being proactive in trying to identify infected persons nationwide by means of a survey, the Patria Poll, which is linked to a national identification card. The Patria poll was lauded by the World Health Organization (WHO) for its ability to detect infections early on.[23] Jorge Rodríguez, Minister of Communication and Information, reported the following: “Of 17,13,4230 people who filled out the surveys, 111,877 showed some type of symptom, allowing for massive early detection intervention. Of those 111,887, we visited 92,237 of them. 8,115  showed some type of symptom: coughing, nasal congestion, headaches and throat pain.” All of these measures demonstrate that despite the sanctions, which make it more difficult for this South American nation to obtain medical supplies, the government has quickly mobilized its limited resources in an effort to curtail the spread of COVID-19.

The Naval blockade further restricts Venezuela’s access to key imports to keep its economy running. The vice president of Economics, Tareck el Aissami, explained how the US naval blockade seeks to undermine the country’s access to fuel supplies: “With this perverse naval blockade and recurring intimidation of potential suppliers, the U.S. is impeding the supply of chemical additives and spare parts necessary for the productive process that distributes fuel throughout our national territory.”[24]

Should a military attack occur, Colombia would likely provide the proxy paramilitaries and eventually be drawn into a larger conflict. This has raised alarm bells in the Colombian legislature.[25] The bellicose posture of the U.S. and its allies in the region has also drawn the condemnation of the Human Rights Network,[26] Russia,[27] Mexico[28] and other state and non-state actors around the world.

With UN Secretary-General António Guterres calling for a global ceasefire in order to unite efforts against COVID-19, a US Panama or Grenada style invasion of Venezuela would involve a high political cost and have an unpredictable outcome. It also appears that a number of Colombian lawmakers have no appetite for a proxy war launched from Colombia. So it is likely, for the moment at least, that the US naval blockade is aimed at increasing the devastating impact of the economic sanctions at the very time Venezuela is battling a pandemic which threatens the entire world. Despite two decades of attacks on the Bolivarian revolution, Washington may once again be underestimating the determination of the Venezuelan civic-military alliance to resist foreign domination and choose its own destiny, even against all odds.

[8] “Trump: US to Deploy Anti-Drug Navy Ships near Venezuela”, https://www.military.com/daily-news/2020/04/02/trump-us-deploy-anti-drug-navy-ships-near-venezuela.html

[9] US intelligence has done everything to find a crack in the Bolivarian armed forces. They have been unsuccessful. Despite the crippling effect of hyperinflation and hoarding by anti-Bolivarian actors, Chavismo is still strong at the state level and among different segments of the working class. This is interesting to contrast with the Bolivian armed forces which did not come out in defense of Evo Morales against the coup. Venezuela continues to push forward through its own “special period” but the Bolivarian spirit is strong. The leadership and masses continue to study Hugo Chávez and how he dealt with these very threats. The slogan and hashtag this week  throughout Venezuela was #FuriaBolivariana.

[20] Conviasa is the nationalized and sanctioned Venezuelan airline. The Secretary of State of Venezuela stated that some 500 Venezuelans wanted to come home from the United States.