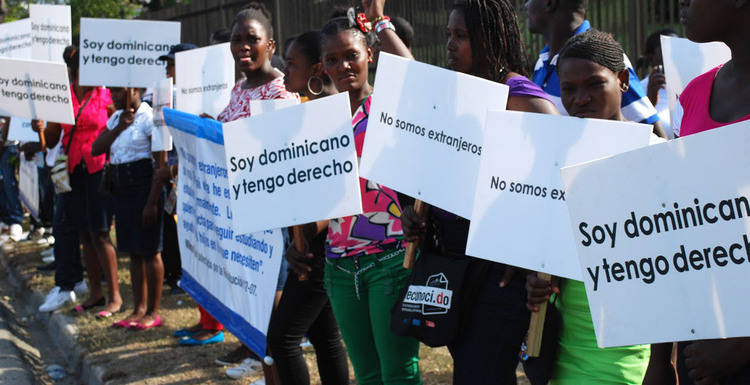 The Constitutional Court decision that denationalizes over 250,000 Dominicans of Haitian ancestry, reaching back to include great-great grandparents born in the nation’s territory in 1929, has been denounced by people of good will at home and abroad. No one connected with Dominican society as their ancestral land could remain psychologically unscathed by a decision that drags the country into the political gutter of moral turpitude. Not merely an immigration matter or a foreign affairs issue involving Haitian-Dominican relations, this event is yet another chapter in the saga of a tainted leadership at war with its own people. Defining Dominicans contrary to what they are, or at least think that they are, began in the latter half of the 19th century and continued into the 20th century with the regimes of murderous tyrant Rafael Leónidas Trujillo and the depraved caudillo Joaquín Balaguer. The court ruling, hypocritically enough, came from the pens of mulatto judges educated by that sullied tradition.

The great poet Rhina P. Espaillat, godmother to the contemporary American poets known as the New Formalists, hardly ever utters a harsh word. But since, out of her 81 enviable years, she still cares deeply for the native land that she left for good in 1939, Rhina burst in anger when the news of the Court ruling reached her. It made her “nauseous.” She deemed it a “disgusting nonsense” and a “stain on the conscience of the Dominican Republic.” The two female judges who cast the minority vote in the Court decision share Rhina’s indignation. Unlike their peers, they impugned the ruling as one causing “denationalization,” “statelessness,” and disrespect for “human dignity.” Their words echo the sentiments of those compatriots abroad and at home who are shamed by a vicious definition of their nationality.

The Dominican Republic started as an inclusive quest for sovereignty that embraced the concept of diversity. The country’s first juridical act transpired on March 1, 1844, when the country abolished slavery “forever” and ended the colonial legacy of racial privilege. Having subsequently created its inaugural national congress, the nascent republic then declared itself a sanctuary for enslaved people everywhere, offering them freedom and citizenship the very moment they stepped on Dominican soil. Hostile to that precedent, the Constitutional Court redefined national belonging according to an anti-Dominican credo. In Santo Domingo, what was then the cradle of blackness in the Americas, the birthplace of racial and cultural mixture in the hemisphere, they made a move to uphold the precept of homogeneity. The present court ruling imagines Dominicans as a uniform people who possess “a particular idiosyncrasy and a common set of collective aspirations” and share “a set of historical, linguistic” and “racial traits.” Defiantly discrediting the heterogeneous visage of the population, the definition reaches back to the colonial period to revive a racial logic that the republic had superseded.

Noting the credentials of a number of prominent supporters of the Court ruling perhaps for some confirms these profound anti-Dominican sentiments. Three examples might do: José Ricardo Taveras Blanco, the General Director of Migration, who invokes “our sovereign right to establish . . . our nationality policy;” Cardinal Nicolás de Jesús López Rodríguez, right-wing politician, bank partner, and Brigadier General, who calls the Court ruling “absolutely fair” and mocks the concerns of human rights advocates, saying “here Dominicans call the shots, not anybody else;” and Leonel Fernández Reyna, three-time former president and potential candidate in the upcoming 2016 elections, who regards the Court ruling as enacting “the sovereignty of the State to determine who Dominican nationals are.”

We need only recall that when ultra- (and therefore pseudo-) nationalists announced a march to repudiate Haitians in the country in September, Taveras Blanco declared his solidarity with their action, reminding his audience of the most brutal era of U.S. racial oppression when the local judge would join the Ku Klux Klan in backing the acts of aggression against blacks in the neighborhood. We know López Rodríguez from his wrathful tirades against the less empowered sectors of society, namely single mothers, disinherited compatriots who had sought shelter in church buildings, priests who conduct mass in créole in regions with many Haitian parishioners, critics of the fraudulent and repressive Balaguer regime, and anyone who disobeys the norm of heterosexuality, among others. When the Cardinal roars that “here Dominicans call the shots,” he means only his small faction of them.

Fernández Reyna stands out for actions such as the concession he made as president to the powerful Canadian mining company Barrick Gold, allowing it to extract gold from the country’s mountains with only meagre economic benefit to the Dominican government, while spreading contaminants and encouraging deforestation throughout its part of the island. He ignored the warnings of environmental specialists about the dangers of metallic mining, the lethal effects of cyanide use in the extraction process, the ensuing threat of the poisoning of rivers, and the demise of vital water resources. Unmoved, he showed that the prosperity of Barrick Gold worried him more than the potential sight of Dominican children drinking cyanide-laced water from the country’s rivers.

In any event, incumbent governments do not have the innate right to redefine a people’s nationality overnight so as to harm a given sector of the population. They may boast the power to do so, thanks to the de facto monopoly on violence that comes with the control of the military, but not the right. Nor do they have the right to dismiss a whole population’s desire for a humane definition of nationality. The Trujillo dictatorship used its power in 1937 and defined the Dominican Republic as little better than a genocidal nation. As a civilized nation, we do not call their malfeasance a right. We call it a crime against humanity. That malfeasance prompted the rise of international legal structures meant to protect victimized groups from the violence of their governments’ actions. Still, the majority of Dominican judges diverged from modern jurisprudence and sided with malevolence, though they could have easily emulated that of Juan Pablo Duarte, the intellectual architect of Dominican nationhood who had decried “the aristocracy of blood.”

No benefit could possibly come to Dominican society from the egregious Court ruling. Analysts have thus looked for likely motives in the political capital now being mobilized. The ruling party has received an ever smaller percentage of the D.R. national vote with­ each of its last three electoral victories. Should the trend continue, the party may run short some 250,000 votes the next time around. Its chances of reversing the trend seem unlikely given its penchant for unpopular measures. But the option remains to reduce the opposition’s voting pool. Targeting Dominicans of Haitian ancestry makes sense given the widespread belief that they usually vote for the opposition due to the Negrophobia and anti-Haitianism deployed by the ruling party in past elections. The Court ruling may simply be a voter suppression stratagem, a tropical mulatto version of schemes made current in recent U.S. politics by the Koch Brothers and the Bradley Foundation.

Current President Danilo Medina refrained for some time from supporting the Court ruling. He received delegations of the Haitian-Dominican population and even heard the plaints of human rights organizations. He did not deny outright the possibility that an injustice may have been committed by the court’s decision, and he acknowledged that “here we face a human drama that we must resolve.” Even the hesitation to speak one way or the other sets him radically apart from the standard practice of the National Palace, where a López Rodríguez-type knee-jerk reaction has predominated, lashing out at any criticism of injustices and often increasing the stridency of the disgraceful behavior in question so as to spite the critics. President Medina still has the opportunity to choose the side of history that he wants to be identified with: that of the anti-Dominican faction that insists the more stubbornly in governing us, the greater its contempt for us, or on the part of the 1844 compatriots who accepted us in the multiple colors of our diversity, bequeathing to us a definition of nationality affiliated with humane values. It takes moral courage to delink from the glamour of evil, especially given the wealth, violence, and power that often sustain it. But committed citizens of the country will firmly insist that they will put their lives on the line for a leader who takes chances on their behalf.

Silvio Torres-Saillant, Research Fellow at the Council on Hemispheric Affairs

This report originally published by the National Institute for Latino Policy.