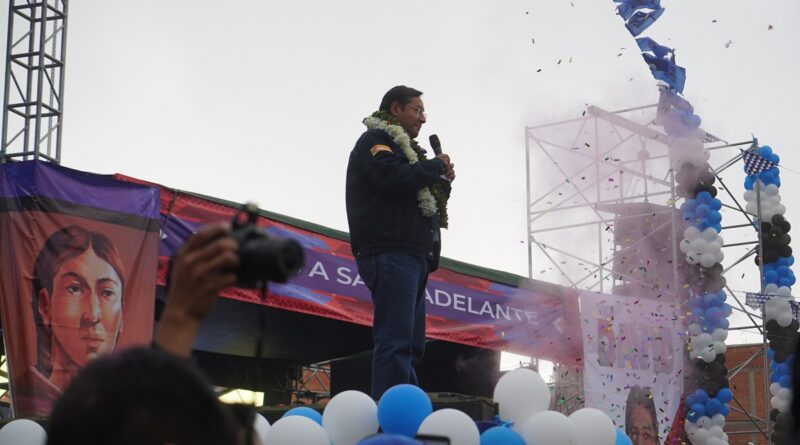 By William Camacaro
From Caracas

The decisive electoral victory of the Movement Towards Socialism (MAS) in Bolivia may be a point of inflection on the continent that advances the construction of a new South American socialist bloc.

After having been removed from power by a military coup with fascist, anti-Indigenous, and neoliberal elements a year ago, ex-president Evo Morales, with his allies, presidential candidate Luis Arce and vice-presidential candidate David Choquehuanca, declared victory in the elections that came to a close on the evening of October 18. According to an exit poll, Arce, who served as Minister of Finance in the Morales administration, was leading in the presidential contest with 52.4 percent of the vote and ex-president Carlos Mesa came in second place with 31.5 percent. The right wing candidate Luis Camacho, allied with the de facto president Jeanine Añez, follows in a distant third place, with only 14.1 percent of the vote. Añez and Mesa have both recognized the outcome of the election[1].

Once the MAS victory is officially ratified in Bolivia in the next few days, it will represent a huge blow to the international right. It will be a political defeat for other conservative leaders in the region, among them Jair Bolsonaro in Brazil and Iván Duque in Colombia, both of whom supported the dictatorial regime of Jeanine Añez. Without a doubt, the MAS triumph provides oxygen for the Bolivarian revolution which in this moment is besieged by illegal United States sanctions, an economic war, and the possibility of military aggression. At the same time, it offers breathing room for Cuba and Nicaragua, countries that are also harassed by illegal United States measures.

A MAS win in Bolivia can also nudge Argentina towards the left without ambiguities. The government of Alberto Fernández now will not be so quick to maintain tepid positions in the international arena as it did a few days ago when it allied itself with the countries of the right wing Lima Group which continues to disparage Venezuela within the halls of the United Nations. The success of the MAS could inspire the social forces that have organized around the plebiscite in Chile that seeks to reform the Pinochet-era Constitution. And it fortifies the electoral option of Ecuador’s presidential candidate Andrés Arauz against the neoliberalism of the formerly leftist politician, Lenín Moreno. A victory of this magnitude will make life difficult for the conservative and pro-militarist government of Colombia and gives more energy to the candidacy of Gustavo Petro in the next elections.

This new scenario shows that the United States is no longer the great liberal nation of the world.  The independence of Spanish South America was due, in great part, to the fact that Spain was invaded by Napoleanic forces. Spain found itself fighting for its own survival against Napoleon at the very moment that the war for independence was developing in South America. In a similar process, the United States will begin a complicated period from the economic, social, health, and political points of view and in the context of the ongoing COVID-19 crisis after the coming presidential elections.

The cost to the country since the arrival of Donald Trump to the Presidency has been enormous. After the US election the nation will have to implement a series of damage control measures and repair multiple wounds at the national and international levels.  This process could take some years at a moment when China has emerged as the preeminent economy in the world. We are entering a new period, another era, in which, without a doubt, one can observe push back against the ex-hegemonic power, especially from social mobilizations in Latin America by groups that have been historically excluded.

In Bolivia there has been a historic popular victory in which the citizens of a poor nation have succeeded, by means of an electoral process, to overcome a military dictatorship backed by the United States. They have defeated the military forces that supported a coup d’etat, the big national and international corporations that were preparing to strip the country once again of the public character of its energy and mineral resources. It is really an impressive triumph, given the difficult conditions within which the MAS and their candidates had to conduct their electoral campaign: Illegal persecutions, fake lawsuits, arrests, political repression, and violent attacks.

This election in Bolivia will have ramifications and consequences across the continent at a time when the United States shows signs that it has entered a process of decline. The Bolivarian bloc continues to survive despite blockades, economic sanctions, military threats, media wars, and all of the hunger and suffering of millions of Latin Americans provoked by the illegal sanctions of the United States. Indigenous Bolivians have given, this 18 of October, an enormous example of dignity, sovereignty, and independence.

Patricio Zamorano assisted as editor of this article