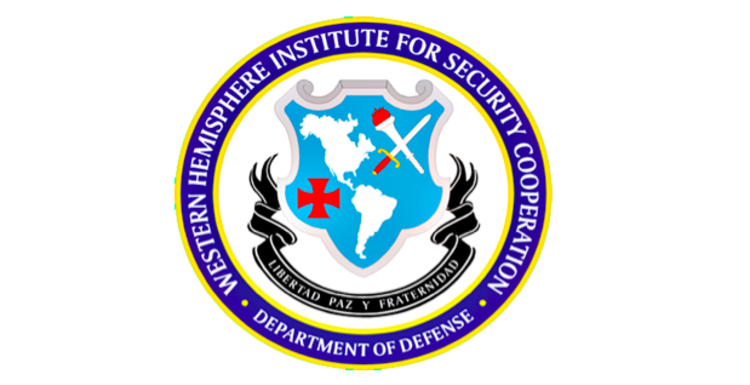 By: Ronn Pineo, Senior Analyst at the Council On Hemispheric Affairs, and Professor and Chair of the Department of History, Towson University.

The School of Americas began in 1946 as a military training site at Fort Amador and then Fort Gulick in the Panama Canal Zone. The facility, called at the time the Escuela Latino Americana Terrestre (Latin American Ground School), centralized the various World War II cooperative military training activities that had taken place in Panamá since just before the war. In 1963 it took the name the School of the Americas, and in 1984, in the wake of the Panama Canal Treaties, it was moved to Fort Benning, Georgia, the new location selected due to the oversized influence of Georgia Senator Sam Nunn and the Senate Armed Services Committee.

Most of the over 61,034 officers and cadets who attended the SOA came on scholarships, often under the U.S. International Military Education and Training program.1 The classes they took, at least in the first decade and a half of the SOA’s existence, were unremarkable. Classes dealt with matters like jeep repair or the preparation nutritious but filling field meals.2

However, the mission of the SOA changed dramatically after Fidel Castro’s successful revolution in Cuba. President John F. Kennedy came to be deeply alarmed, even fixated, by what he saw as a mounting communist treat in the hemisphere. In response, he created the Alliance for Progress, an initiative which offered considerable financial aid to promote social reform, but was also joined with a powerful determination to fund, train for, and launch counter-insurgency operations to neutralize communist influence in Latin America. Kennedy was particularly keen on expanding the size and mission of the military’s Special Forces–the Green Berets–to attack the threats he perceived. Accordingly, between 1962 and 1967 the United States deployed over six hundred Special Forces Mobile Training Teams, each with two officers and ten soldiers, on training missions across the Americas.3

At the same time, the SOA revamped its curriculum, adding instruction in anti-communism, training in counter-insurgency methods, and primers in prisoner interrogation techniques. Some course content became so sensitive that even the course descriptions was classified.4

Under President Jimmy Carter, as researcher Gregory Weeks has noted, the situation improved at the School of the Americas, with “all courses on irregular warfare, psychological operations, interrogation, etc. … eliminated.”5 But when Ronald Reagan came into office in 1981 the old curriculum was largely restored and new classes added, including course offerings just for the Salvadoran military. President Reagan had taken a sharp personal interesting in helping the government of El Salvador, then in the midst of brutal campaign against leftist guerrillas, their supporters, and those suspected of being supporters.

On the morning of the November 16, 1989 Salvadoran soldiers burst into the religious sanctuary at the campus of the Universidad Centroamericana “José Simeón Cañas” in San Salvador and gunned down six Jesuit fathers, housekeeper Elba Ramos, and her young daughter Celina. World mourning and outrage followed. Given the heavy U.S. role in supporting the Salvadoran military, U.S. Representative Joseph Moakley of Massachusetts launched an inquiry into the slayings, looking into the possible role the U.S. might have played in this outrage. The resulting investigation found that nineteen of the twenty-six Salvadoran soldiers who carried out the murders had trained at the SOA.6 The revelation was stunning; even today we yet witness the implications. 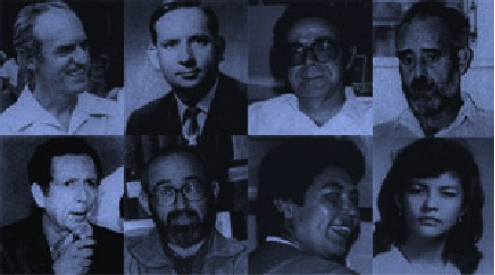 Immediate, intense, and widespread pressure built for full disclosure about what was going on at the School of the Americas. The U.S. Army stonewalled, but in 1996 was finally forced into what became another significant revelation: torture training manuals. From 1989 to 1991 the SOA had employed seven U.S. Army Spanish language counter-insurgency training manuals, and over a thousand copies had been distributed to military personnel in Colombia, Ecuador, El Salvador, Guatemala, and Perú from 1987 and 1989. The manual detailed brutal interrogation methods, including forced drug injections, and recommended “the arrest or detention of the … relatives” of anyone being questioned, or if that did not work, to “give him a beating.”7 U.S. Representative Joseph Kennedy, summing up the common reaction, said that the government documents “revealed what … [those] opposed to the … [S]chool [of the Americas] had been alleging for years—that foreign military officers were taught to torture and murder.”8 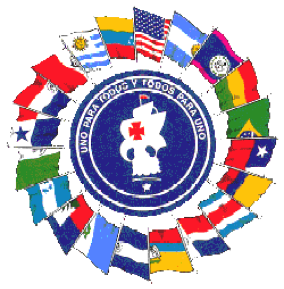 Forced under the Freedom of Information Act to disclose details of SOA training and the names of those who attended classes, researchers have compiled some rather damning facts. Of those Salvadoran military personnel specifically named as the authors of serious human rights crimes in the 1993 United Nations Truth Commission report, two-thirds had attended the SOA.9 Indeed, the list of those attending the SOA, we now know, includes some of the most savage violators of human rights that the world has ever seen: Roberto D’Aubuisson, death squad organizer and author of the murder of Archbishop Óscar Romero, of El Salvador; Efraín Ríos Montt, key architect of the Guatemalan genocide; the military leadership of Argentina, including Leopoldo Galtieri, during the time of the “dirty war”; the leadership of the barbaric Honduran Battalion 3-16; the Salvadoran Atlacatl Battalion, which carried out the 1981 El Mozote Massacre of hundreds of innocent peasants, children, women, and men; Panamanian henchman Manuel Noriega Moreno; and most those responsible for the Chilean human rights crimes under dictator Augusto Pinochet Ugarte.10 All these men studied at the School of the Americas.

The Role of the School of the Americas

A quantitative study by researcher by Katherine E. McCoy found that only 1.3 percent of those who attended the SOA were ever connected to any known human rights crime.11 Attending the SOA was a common experience for most military men in Latin America in this era, and it follows therefore that nearly all SOA attendees had nothing to do with human rights violations. Moreover, some of those who trained at the school did not end up serving right-wing military governments, but instead left-wing progressive ones like that of General Juan Velasco Alvarado in Perú (1968-1975).

Most of the training that the participants received at the SOA was brief; nearly all courses lasted just one to four weeks.12 SOA classes were usually innocuous. Infamously cruel Bolivian dictator Hugo Banzer, for example, attended the School of the Americas, but his class records from 1956 show that he took a short course in how to best serve as a military driver.13 Whatever Banzer understood about the use of torture and terror–and Bolivians understand only too well that this was a lot–he learned somewhere other than at his brief stint at the School of the Americas.

Defenders of the SOA argue that a core mission of the school is training in military professionalism and democratic values. They point out that while it is true that many SOA participants came from countries where the military had often the worst records of abuse, that it was precisely these officers and cadets who would most profit from SOA guidance in developing a deeper sense of professionalization.

These views are sincerely held by nearly all who were associated with SOA. Yet if this was the real mission of the SOA, then it is fair to conclude that it failed at this task. Instead, the school functioned to reinforce extreme anti-communism, legitimating a dark paranoia too often granted full expression when the students returned home from their studies at the SOA. In the end it was the SOA culture that was most important, signaling that one had to tough enough to do what was necessary to match the perceived communist threat.

The SOA was only one element in U.S.-counter insurgency efforts. The U.S. Central Intelligence Agency, we can safely surmise, evidently recruited actively at the SOA, handpicking those who would then be provided more advanced training. CIA training, to the extent that we can learn about it, appears to have been bone-chillingly evil, with hands-on instruction in the black arts, including torture.

Worse still was the systemic role of the Argentine military during its “dirty war” from 1976-1983. The Argentine military, not content with raping, torturing, and murdering their own fellow citizens, decided it should help train others to be just like them. It was Argentina that did the most to coach the Central American militaries and irregular forces, like the Nicaraguan contras, in the craft of torture, murder of civilians, and wholesale human rights violations.14

Closing the School of the Americas

In the wake of the explosive public exposure of SOA training manuals and the establishment of SOA links to perpetrators of many of the human rights crimes in the region, the School of the Americas had to close. Given the public relations disaster, the SOA shut its doors in 2000.

In 2001 the Fort Benning announced the opening of WHINSEC, located in exactly the same place as the old SOA, and teaching nearly all of the same courses. Still, there are some changes. WHINSEC now spotlights courses in Peace Operations and Democratic Sustainment. Even more, WHINSEC mainstreams human rights awareness and training in democratic values, adding this curriculum content to nearly every class.15 They are much more careful now about all these matters at WHINSEC. 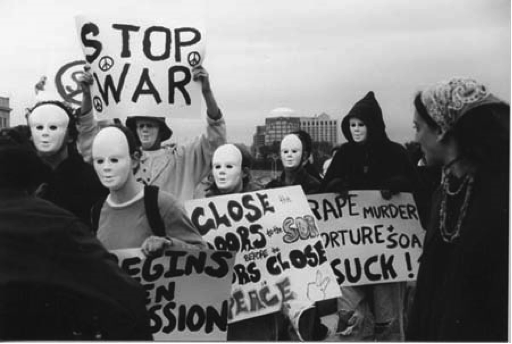 In Panamá today the old School of the Americas building is a five star eco-tourism hotel. Up in Georgia WHINSEC keeps chugging along, even holding human rights conferences which academics refuse to attend, “even when the school offered to pay their expenses.”16 And every November protesters assemble outside the Fort Benning gate, demanding the closing of WHINSEC and reciting the names of those who were murdered. Some demonstrators climb the fence to get arrested; those being detained for a second time at the site can get half a year in jail.

There is honor in these actions. They may not be able to close WHINSEC, but they bear witness to the evil that was done, and they express our shared desire to assure that it cannot happen again. Above all, they honor the memory of those who were lost.

School of the Americas = wrscoldwar.pbworks.com