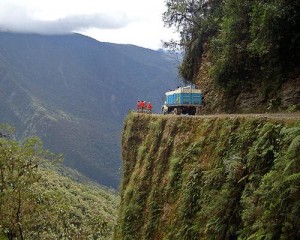 Driving can be a harrowing experience in Bolivia. Consider, for instance, the North Yungas Road, or “Death Road,” a treacherous stretch of highway that claims over 200 lives annually and has been christened the “most dangerous road in the world.” Although renovations to this Andean deathtrap have rendered it safer, the state of Bolivia’s transportation infrastructure is still a precarious issue. Currently, the Morales administration is locked in a fierce battle with indigenous groups over a highway construction project—if the state has its way, this road will cleave the Isiboro Sécure National Park and Indigenous Territory (TIPNIS) in two, much to the chagrin of its present inhabitants.

Located in Bolivia’s northeastern Amazonian region, TIPNIS is both a national park and an autonomous territory. The flora, fauna, and human population of TIPNIS will undoubtedly suffer from the highway’s completion. The indigenous inhabitants of the territory will be forced to deal with unsavory incursions into their homeland by illegal loggers, narcotraffickers, and unsavory cocaleros who practice slash-and-burn agriculture. Additionally, within 18 years of the road’s completion, deforestation will occur throughout an estimated 64 percent of TIPNIS, negatively impacting the territory’s 3,000 plant species and eleven different endangered animals.

On August 15, over 500 indigenous protestors and their supporters embarked on a 40 day, 375 mile march to La Paz to protest the road slated to cut the TIPNIS in two. A similar demonstration in 1990 directly resulted in Supreme Decree 22610, which legally recognizes indigenous communities’ ownership of TIPNIS. And in Bolivia’s 2009 constitution, President Evo Morales reaffirmed this sentiment by granting the Chimán, Trinitario, and Yuracaré people of TIPNIS autonomy. Perplexingly, it seems that Morales’ days as a stalwart environmentalist and indigenous rights advocate have drawn to a close. In June 2010, he announced, “I want to say to the so-called ‘defenders of the environment’ that whether they like it or not, we’re going to build this highway and we’re going to deliver it under my administration.” Whether Morales is bowing to pressure from international corporations looking to reap the benefits of Bolivia’s new highway, or honestly believes the project will spur modernization and development in his country, is difficult to ascertain.

Admittedly, Bolivia’s transportation network is dreadfully lacking. Approximately 63 percent of Bolivia’s rural roads are unpaved, and others, such as Death Road, present flagrant security hazards. Furthermore, Bolivia has a road density of only 6 kilometers of roads per 100 km2, a figure more comparable to Afghanistan’s road density of 6.06, than Brazil’s road density of 20, or even Nicaragua’s road density of 14. While infrastructure investments, such as the proposed highway, could aid Bolivia’s development, new roads need not cut through autonomous territories with high levels of biodiversity and considerable vocal opposition.

Indigenous protestors have called for the government to re-route the construction project, so that the highway circumvents TIPNIS. Although the Bolivian government is unwavering in its resolve to build the road through the territory, Brazil, which is funding a full 80 percent of the project, seems willing to consider the community’s suggestion. Morales should do the same. He must walk a fine line to balance the demands of Bolivia’s indigenous groups against matters of national development. Yet, reneging on promises enshrined in the Bolivian Constitution only two years ago could become the greatest mistake of his presidency, and is entirely avoidable.