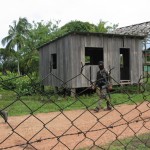 On May 11, death came to the Miskitia from U.S. State Department-owned helicopters manned by contract Guatemalan pilots, members of a special Honduran Police Unit, along with U.S. DEA agents. Reports concerning the botched anti-narcotics operation barely survived three news cycles before expiring in the face of an indifferent public. During week one, a number of initial news reports (with the notable exception of the coverage by the Huffington Post) offered a defaming criminal profile of the local Miskito population using anonymous “official” U.S. government sources. During week two, when the voice of the Miskito community was beginning to be heard more clearly, some news reports offered a more humanized version of the people of Ahuas and surrounding villages. By May 17, the question of U.S. accountability began to lose steam when State Department spokeswoman Victoria Nuland deferred the responsibility of carrying out an investigation to the notoriously corrupt Honduran authorities. Despite the current paucity of news about this incident, the struggle for justice in the Miskitia continues.

The Miskitia killings raise legal, ethical, and policy questions of the greatest import. Legal experts will have to assess whether, even if the agents involved truly believed they were targeting drug traffickers, the lethal force to which they so quickly resorted was in anyway justified in this instance. As Human Rights Watch pointed out (May 17), “It is critical that both Honduran and U.S. authorities ensure that the killings are thoroughly investigated to determine whether the use of lethal force was valid. If evidence demonstrates that security forces violated international standards, they must be held accountable.” According to an AP report (June 1, Washington Post), State Department spokesman Mark Toner said: “There’s an ongoing government investigation by the government of Honduras into this matter. And I’m also aware that there’s a separate DEA investigation.” Whether these investigations will be thorough and transparent has yet to be seen. In the meantime, the official Honduran and U.S. line is that the helicopter(s) were in pursuit of drug traffickers, that these helicopter(s) were fired upon first, and that agents then returned fire. (This scenario has not been substantiated by any investigation.) While this version of events is in dispute, there is a consensus on all sides that drug smuggling was indeed occurring in the area surrounding Ahuas and that the passenger boat fired upon was mistaken for one used by drug smugglers.

Whatever legal jurisdiction is used to ultimately hear this case, the three important questions will be: was lethal force justified, who is guilty for the killing of the victims, and are those accountable also criminally responsible? We can already begin to narrow down the questions about accountability. At first approximation, the Guatemalan contractors were clearly participants, but they were probably following instructions. The State Department insists that U.S. DEA agents on board the helicopters did not fire their weapons, that they were simply the planners of, and advisors to, the operation. Planners and advisors, however, must share more than a small portion of the accountability with the executors of the plan. A full-fledged U.S. investigation of the tragic incident is very much in order to better assess issues of accountability.

At this late date, the only published reports based on investigations carried out on the ground in Ahuas are by highly regarded non-governmental human rights organizations. A delegation from the United States and Canada, organized by Rights Action and Alliance for Global Justice, was in Ahuas May 22-23. They issued a preliminary report that includes testimonials and photos related to the incident (http://hhrd2012.wordpress.com/). The well-respected Honduran Committee of the Relatives of the Detained and Disappeared of Honduras (COFADEH) conducted an investigation May 20-24 (Informe Preliminar de Verificación Caso Ahuas 11 de Mayo). This latter report provides the most detailed study of the incident and its aftermath made available thus far. Furthermore, COFADEH held a press conference on May 31 that included survivors and family members of the victims. Journalists Dick and Miriam Emanuelsson videotaped this conference (published June 1 on YouTube)[i]. Six days later, these same journalists posted photos of the victims’ bodies.[ii] These investigations, photos, and testimonials raise some important ethical and policy issues.

First, these on-sight investigations at Ahuas put a human face on the affected community. We learn about the poverty, the growing military presence in the area, and the use of the Patuca River as a primary transportation passage for the area villages. Most important, we learn about the victims. The persons killed include Juana Jackson Ambrocio, who was six months pregnant and the mother of two children, and Candeleria Pratt Nelson, who was five months pregnant and the mother of six. (It should be noted that one Ahuas resident said there are actually six dead, because the two women were pregnant.) The others officially counted among the dead are Hasked Brooks Wood, who was 14 years old and was travelling with his mother Clara Wood Rivas, and Emerson Martinez Henriquez, a 21-year-old and father of two, travelling with his father-in-law. Additionally, four of the passengers were wounded. The reports confirm that some of the family members are struggling to provide quality medical care to their wounded loved ones. It is clear that the Ahuas community wants justice.

Second, both investigations, up to now, corroborate the same version of events. Since the actual operation from the air has been amply covered, we now turn our attention to the tragic aftermath of the incident. Following the attack, authorities entered the homes of numerous residents of the town of Ahuas and interrogated them at gunpoint. In some cases residents claim that English-speaking, uniformed agents were present. During these searches and interrogations, residents were reportedly prevented from attending to the wounded. This raises ethical questions about the duty of the police units to offer assistance to the wounded, not prevent it.

Third, there are a growing number of calls for thorough and transparent, official investigations into the May 11 incident and for the suspension of U.S. assistance to the Honduran military and police. On March 9, 2012, 94 members of the U.S. congress wrote Secretary of State Hilary Clinton urging her “to suspend U.S. security assistance to the Honduran military and police given the credible allegations of widespread, serious violations of human rights attributed to the security forces.” On May 22, COHA called for “congressional hearings to examine both the details of the May 11 operation in the Miskito Coast territory, and the overall security cooperation between Honduras and the United States.” The U.S.-Canadian delegation has called for an investigation that will identify “criminal responsibility for specific individuals” in the killings. In a June 7 letter to President Obama and Secretary of State Clinton, more than 40 Honduran scholars, with the support of over 300 additional signatories from 29 countries, demand an end to U.S. police and military aid as well as the training of Honduran forces. The letter argued, “Combating drug trafficking is not a legitimate justification for the U.S. to fund and train security forces that usurp democratic governments and violently repress our people.” This appeal from colleagues in Honduras raises an important ethical question: If we object to the growing subordination of democratic rights to the war on drugs here in the United States, why should we expect such an extreme sacrifice from Honduran citizens?