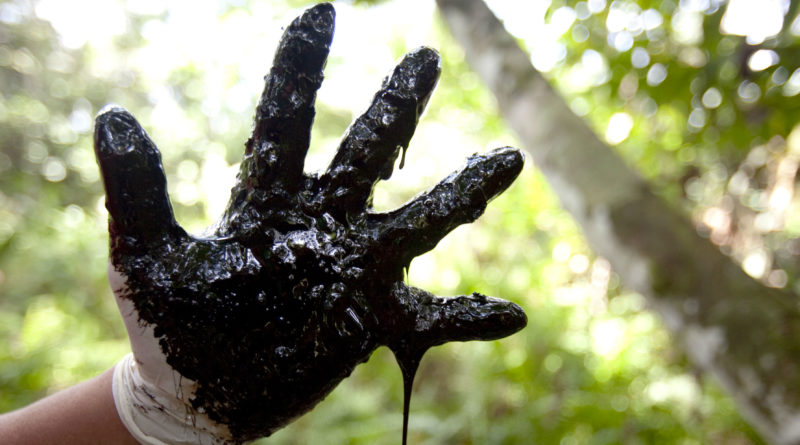 In his humble wooden home in the Ecuadorian Amazon, a man responds to questions of how oil spills near his home have affected him and his family. “I’ve had three children die… My little girls died. They would run around outside and be covered in crude. And then later they started dying.” When he asked for help from Texaco, the oil giant responsible for the contamination, they told him that they would send help to his daughters and take responsibility for their actions. But, he added, “So far, they still haven’t shown up, and it’s been more than twenty years.”[i]

This terrible story is just one of three shown in several tapes submitted to Amazon Watch, an environmental human rights non-governmental organization, by a Chevron whistleblower. For nearly a quarter of a century, the former oil company, Texaco (acquired by Chevron in 2001) has been under fire for having contaminated the Ecuadorian Amazon with millions of gallons of oil and toxic wastewater that has made its way into groundwater, rivers, and streams. The results of the pollutants have been catastrophic to the environment as well as to the health of the people living in the indigenous communities.

In 1993, a group of lawyers advocating on behalf of indigenous people in Eastern Ecuador, filed a lawsuit against Texaco over the toxins that the company had released into the Amazon. The attempt to bring Texaco to justice for what many believe to be one of the gravest environmental human rights abuses of the late 20th and early 21st centuries has proven to be anything but easy. It has been a long process that has evolved over the course of twenty-two years to include numerous lawsuits and appeals involving four different countries and millions of people, with an end nowhere in sight.

It is an uneven battle between Chevron and the indigenous inhabitants of the Ecuadorian Amazon. The oil giant’s more than $200 billion USD net worth provides the resources to continue in litigation until, as one Chevron spokesman has said, “…Hell freezes over—and then…fight it out on the ice.” [ii] Despite the immense disproportionality in monetary resources, the people of Ecuador have overwhelming and powerful global support, perhaps giving the global audience a preview of how this David and Goliath-esque battle may end.

In 1993 and 1994, two separate grievances were filed against Texaco in US federal court. Both were class action lawsuits alleging that between 1964 and 1992 Texaco’s oil operations polluted the Amazon rainforests and rivers of Ecuador and Peru, the two regions where the plaintiffs of the cases were located.[iii] However, in 2002 the US courts dismissed both lawsuits on the grounds that the South American courts would be a more appropriate venue for the litigation of the claims.[iv] Texaco agreed to jurisdiction in Ecuador and/or Peru, most likely under the assumption that it would be able to get away with its crimes in the South American countries.

In 2003, a second class action lawsuit was brought against Texaco (now Chevron) further stressing environmental contamination as a link to cancer in the inhabitants of the Amazon. Initial inspections of the claims began in 2004 and the estimate of damages Chevron was being asked to pay went from $7-16 billion USD in early 2008 to $27 billion USD by November of that year. [v] Defiant, a Chevron lobbyist in Washington told Newsweek, “We can’t let these little countries screw around with big companies like this.”[vi] So in September 2009, Chevron filed an international arbitration claim—for the second time—before the Permanent Court of Arbitration, alleging that Ecuador’s government violated a US-Ecuador bilateral investment treaty.[vii] Although seemingly unconnected to the cases, the investment treaty had the potential to be Chevron’s greatest weapon, as it would allow the company to convene a panel of lawyers with the power to override Ecuador’s judicial system and constitution in order to throw out the judgment awarded in the original case.”[viii] When the arbitration panel ruled in favor of the oil giant, Ecuador filed a lawsuit in US federal court that barred Chevron from proceeding with arbitration under the investment treaty. In March 2012, an Ecuadorian court ruled that Chevron could not use an order from the international arbitration tribunal, and in an effort to enforce this, the Ecuadorian plaintiffs filed lawsuits in Canada and Brazil going after Chevron’s assets in those countries; the “little country” seemed to be succeeding in screwing with the big company.[ix]

Out of the already extensive lawsuits filed in this case, the one garnering the most attention lately has been the February 14, 2011 ruling by Ecuadorian judge Nicholas Zambrano in which Chevron was ordered to pay $9.5 billion USD in clean up costs. Although Chevron had expressed in the past through numerous affidavits that Ecuador’s court system was fair and that it would allow the country’s courts to handle the litigation of claims against it, the oil company is now going back on what it had previously promised.[x] Chevron, after having lost in Ecuador, brought the case to the US, where it sued Steven Donzinger, the plaintiff’s lead attorney, and his legal team, accusing them and their indigenous clients of bribing an Ecuadorian judge. In an attempt to defend this claim, the corporation invoked the Racketeer Influenced and Corrupt Organizations Act —a statute designed to prosecute organized crime.[xi] Despite these harsh claims against the Ecuadorian court, Chevron admitted paying at least $326,000 USD (with estimates of up to $2 million USD) for the cooperation of one of its key witnesses, former Ecuadorean judge, Alberto Guerra.[xii]

Chevron has also made the claim that the $9.5 billion USD rule against it was “ghostwritten,” an allegation that a litigation document was obtained by Zambrano via USB drives, rather than having been thoughtfully and meticulously written out. However, this allegation has been proven false in the recent weeks. A leading computer forensics expert, J. Christopher Racich, found that the 188-page Ecuador judgment was written over a four-month period, ultimately leading up to the ruling.[xiii] This discovery directly contradicts Chevron’s testimony that one of the Ecuadorians’ lawyers gave the judgment to Judge Nicolas Zambrano in late January 2011, just days before the judgment was issued.[xiv] Chevron’s failure to produce the serial numbers of the USBs in question has added to the already strong sentiment that the corporation has been falsifying evidence, and has fueled the desire of Ecuadorian villagers to use Racich’s forensic report as an aid in their other lawsuits against Chevron.

Although undeniably vulnerable in the past, indigenous communities from all over the world are showing their might by standing in solidarity against Chevron and its corporate irresponsibility. On April 21, activists from the United States, Canada, and other indigenous territories of North America met with indigenous communities from Ecuador to protest Chevron in front of the International Center for Settlement of Investment Disputes (ICSID) in Washington, D.C.[xv]

The indigenous communities’ protest is in response to Chevron’s request that the ICSID hold a hearing to pressure Ecuador, instead of Chevron, to pay the $9.5 billion USD that Ecuadorian courts ruled should be paid to the victims of Chevron’s spills and contamination.[xvi] This request by Chevron is a further injustice toward the indigenous communities of Ecuador, who have already endured so much and it has ignited not only Western hemispheric support, but global support as well.

Amid the arduous effort of the people of Ecuador to bring Chevron to justice, global support from various non-governmental organizations and environmental human rights organizations have harnessed an interesting new method that they believe will pressure certain big corporations to turn from their chronic irresponsibility and move toward establishing responsible practices. The key? Rattling corporations’ reputations.

Perhaps the greatest example of this method is the work of prominent Swiss environmental organizations in crowning Chevron as the winner of the “Lifetime Achievement” award for dumping its toxic waste into the Amazon. The award is one of many Public Eye Awards given to corporations that have atrocious business practices ranging from human rights, labor law, and environmental rights violations. Public Eye as a whole “sheds a critical light on business practices and provides a platform to civil society organizations to publicly criticize cases of human and labor rights violations, environmental destruction, and corruption.” Specifically, the Public Eye Awards “remind global players that the social and environmental consequences of their business practices affect not only people and the environment, but also the reputation of the company.” [xvii]

At the Public Eye Awards ceremony in Davos Dorf, Switzerland, Paul Paz y Miño, of the U.S-based environmental and human rights group Amazon Watch—the organization that nominated Chevron for the prize—referred to the corporation as “a recidivist toxic polluter that deserves condemnation from the world community for its horrific acts against the vulnerable indigenous peoples of Ecuador.”[xviii] That condemnation has become stronger in the last year with Chevron’s newest dishonor as well as the growing suspicion that the corporation has falsified evidence in this seemingly never-ending litigation.

The uneven battle between Chevron and the indigenous populations of the Ecuadorian Amazon has persisted for more than two decades with Chevron having been the clear winner thus far. However, the oil giant’s Goliath of monetary resources seems to be buckling under the pressure of the Ecuadorian Amazon’s David, fueled by global support and undeniable evidence.

Chevron’s irresponsible corporate practices have been made more and more clear to the global audience over the course of this long struggle for justice, and people have responded through protests spanning 5 continents and more than 16 countries stressing the need for environmental clean up and changes in corporate policy.[xix]

As Amazon Watch’s Paul Paz y Miño’s put the matter, “Chevron deliberately caused a lifetime of suffering and death by polluting the Ecuadorian Amazon to increase its already high profits to obscene levels. Chevron has also inflicted years of abusive lawsuits designed to leave affected communities defenseless and has tried to win by might what it could never win by merit.” It is past time for justice for all those harmed by Chevron’s greed and irresponsibility.