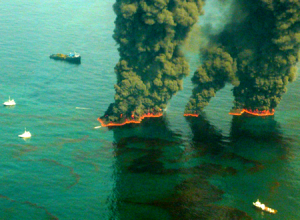 On the brink of oil exploration, newfound petroleum and natural gas deposits near Cuba, as well as pressure at the pumps, may push Washington to lay the foundation for more open relations with Havana.

In 2008, the U.S. Geological Survey estimated between 7 to 14 billion barrels of oil were trapped within Cuba’s continental shelf. Three years later, the Cuban government and Spanish oil company Repsol YPF, estimate that over 20 billion barrels of oil are sitting under the ocean floor just a few miles off the north-west end of the island, waiting to be exploited. As part of a multinational partnership, Scarabeo 9, a semi-submersible drilling rig, owned by the Italian oil company, Eni SpA, is currently being constructed by the Chinese in Singapore. Nearing completion, the oil rig is scheduled to be towed to Cuba by September or October of this year. While future oil revenue will have obvious economic benefits for the island nation, this recent oil discovery may also force Washington to relax its incredibly stale trade embargo.

At the same time, the spike in global oil prices has persuaded the Obama administration to open up delicate environmental domestic regions for drilling. In his May 14th Weekly Address, the U.S. president outlined a handful of strategies to alleviate skyrocketing oil prices. One of these strategies calls upon the Department of the Interior to accept bids for annual leases for oil drilling in Alaska’s National Reserve and in the Gulf of Mexico while, theoretically, “respecting sensitive areas.” To allow oil companies more time to catch up with the newly enhanced environmental and safety standards, Obama’s administration has consistently extended leases already granted for drilling in the Arctic Ocean and the Gulf of Mexico. However, these measures could not possibly affect oil prices significantly; after all, Americans consume over 20 percent of the world’s oil supply, yet produce a mere five percent of what they consume. Furthermore, OPEC’s refusal on June 8th to increase oil production shot oil prices up by as much as USD 2 a barrel. Cuban oil would provide an immediate, possibly convenient source of nearby oil for the United States. Nevertheless, this black gold will not even remotely benefit the U.S. financially if Washington mechanically refuses to engage in dialogue with Havana.

Moreover, given the crisis brought on by BP’s Deepwater Horizon in April of 2010, it will be in the best interest of the United States to cooperate with Cuba to generate some sort of contingency plan in the event of another environmental catastrophe. Because the new Chinese-built rig can drill in waters as deep as 3,500 meters, just short of Deepwater Horizon’s capacities, the potential for large-scale blunders is relatively high. The proximity of the Cienfuegos well site, about 50 miles from the coast of Florida, demands Washington’s protective eye. Furthermore, the current U.S. trade embargo blocks a range of U.S. commodities from Cuban markets while also limiting the use of American drilling technology to ten percent. The Scarabeo 9 does not utilize American technology, thus being able to operate under the current embargo. By the same token, Cuba would be unable to use any U.S. containment technology, compelling Cuba to seek such technology from distant partners in the North and Mediterranean Seas. This lag in response-time would only exasperate the dangerous scope of damage that could be done to the Gulf Coast in the case of another disaster.

Innovations in drilling technology have given the Scarabeo 9 the advanced capability of drilling horizontally, striking concerns in both the U.S. and Mexico over the potential siphoning of their oil reserves. In mid-April, the undersecretary of Mexico’s Ministry of energy, Mario Budebo, called for talksbetween the three nations to clarify this haziness resulting from this jurisdictional dispute. Washington’s fairly amicable relations with Mexico may give way to successful mediation between Capitol Hill and Havana.

While Washington seems to be returning to the redundant and illogical “drill, baby drill” mentality, it is essential that domestic and international safety as well as environmental regulations, be made a top priority. For the first time in recent memory, partial reconciliation with Cuba would dramatically advance U.S. interests. Ignoring all other motivations, extending the olive branch to Cuba is utterly necessary to protect American consumers and their environment.