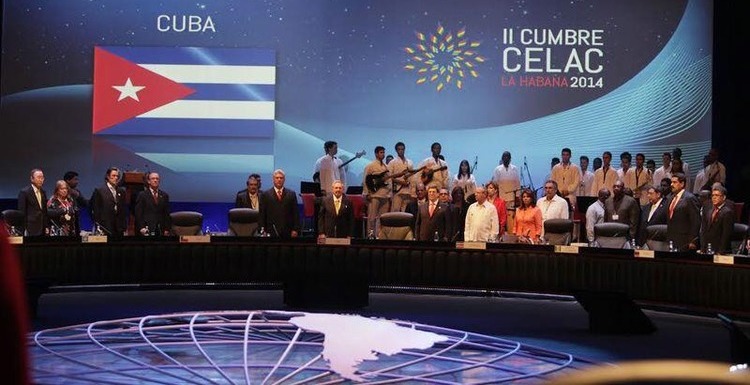 On Tuesday, January 28 and Wednesday, January 29, 33 members of the Community of Latin American and Caribbean States (CELAC) are set to meet in Havana, Cuba to discuss a multitude of pertinent issues in the region, the most prominent being inequality, poverty and national security. This two-day summit will gather heads of state and foreign ministers from all of the countries of the Americas, with the exception of the United States and Canada. Making an appearance in Cuba for the first time since 1962 will be Secretary General of the Organization of American States, José Miguel Insulza. [1]

Numerous preliminary discussions have already placed relevant topics on the table. One such conference was the national coordinators meeting on January 25. Among the results of the gathering were the Proclamation of Latin America as a Zone of Peace and the establishment of a China-CELAC forum. [2] A topic likely to be considered at the CELAC conference will be the ongoing peace talks between the Colombian government and the Revolutionary Armed Forces of Colombia (FARC). The Uruguayan President José Mujica recently made an informal request to Colombian President Juan Manuel Santos and FARC leaders to confer in a trilateral discussion at the summit. Drug trafficking has been one of the most pressing issues during the peace talks. Mujica is in a unique position to lead the discussion, as his administration recently passed a controversial law permitting the sale and distribution of marijuana. [3]

The recently formed CELAC provides a more comprehensive alternative to the preceding Rio Group, which was originally established in 1986. Since the Rio Group dissolved in 2010, there has been one CELAC conference, which was held in Santiago, Chile in 2013. [4] The 2014 meeting in Havana represents the objectives of the CELAC member states to further enhance diplomatic participation in the region and the effort to continue the growing trend towards regional organizations.

The location of the summit solidifies an emerging trend that Latin American and Caribbean countries have displayed no reservations about including Cuba in regional integration initiatives. Despite the mid 1990s being a prime time for Latin American countries to restore diplomatic ties with Cuba, it was not until 2009 that two Central American countries (El Salvador and Costa Rica) lifted a diplomatic freeze on their neighboring island [5]. Cuba playing host for the second annual gathering puts to rest any lingering qualms that Latin American and Caribbean states would take steps towards regional integration without Cuba.

Ironically, the meeting marks an isolationist era for the United States in Latin American and Caribbean affairs. Several U.S. policies that were originally put into place to ostracize Cuba from the rest of the world, most notably the Cuban embargo, are now having the very same effect on the United States. In the recent United Nations vote to repeal the U.S. embargo against Cuba, only Israel voted alongside Washington, making the final count in the General Assembly 188-2 [6]. The U.S. stands virtually alone with its foreign policy approach towards Cuba, which is clearly reflected through its exclusion from the multilateral summit and other area meetings.

Despite isolation, the United States continues to promote an archaic foreign policy regarding Cuba and the entire hemisphere. Unless the U.S. develops a strategy founded upon mutual respect, it will be unable to project and participate in ongoing integration efforts, which include initiatives such as CELAC, the Union of South American Nations, and the Pacific Alliance.