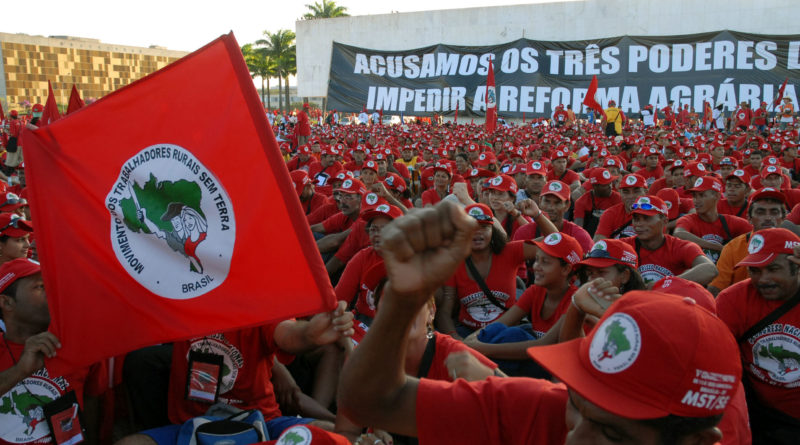 On April 14, 2016, a board of judges issued an arrest warrant against Luiz Batista Borges, Diessyka Santana, Natalino Jesus, who are small farmers and members of the Movimento dos Trabalhadores Rurais Sem Terra (Brazilian Landless Workers Movement; MST), as well as a well-known activist and advocate of agrarian reform, Jose Valdir Misnerovicz. Borges was arrested on the very same day he went to the police station to clarify the status of accusations against him, and has been in prison for over 47 days now. Misnerovicz, one of the national leaders of the MST, was arrested on May 31, in a conjoined operation of the State police of Goiás and Rio Grande do Sul. Santana and Jesus were forced into exile to escape arrest.[1]

They are being accused of association to commit crime, under Law nº 12.850/2013 which typifies criminal organizations. It is the first time in over 30 years of the MST’s existence that members of the judiciary are formulating such accusations against members of the MST. This application of the law negates the extensive jurisprudence existing in Brazil, which states that the struggle for land reform is an exercise of citizenship and cannot be mistaken for a crime.

This judicial decision is related to the occupation of a small part of the Santa Helena Sugar Mill, whose owners (the NAOUM economic group) are being prosecuted for misappropriation of social security contributions, non-compliance with labor obligations, and tax fraud. Since the debt of the NAOUM economic group with the State has amounted to over three billion USD, federal prosecutors filed a lawsuit of tax enforcement against the group in a Federal Court. It ruled that the properties of the Santa Helena Mill should be transferred to the State in order to settle just a small part of the debt with the Federal Treasury.

Under Brazilian Law, this is an indication that those lands should then be transferred to the Instituto Nacional de Colonização e Reforma Agrária (National Institute of Colonization and Agrarian Reform; INCRA), the federal authority responsible for agrarian reform. As a means to force the public officials to speed up the process, the landless rural workers started to occupy the property. It is important to note that the legislation that regulates these operations requires this process to be completed within a certain amount of time. A commonly used strategy is thus to artificially delay this process, under the pretext of Brazilian bureaucratic burden, in order to prevent land reform – and return the land to the previous owners.

In fact, the Superior Tribunal de Justiça (Superior Court of Justice; STJ) ruled to nullify the process, and decided that “the property must be intended to cultivate sugar cane, and that the landless workers would have difficulty carrying out such activity, causing immeasurable damage to the city of St. Helena.” It should be noted that no sugar cane is planted in the occupied area, only soy, and that the 1500 families that were in the area were already cultivating the land.[2]

This afternoon, June 7, the Criminal Chamber of the Court of the State of Goiás, ruled on Borge’s Habeas Corpus request. The judge presiding the case denied all the defense’s requests, and the trial was suspended for further examinations.

Although the violence against popular movements in Brazil is rooted in the country’s history, it has been escalating at an unprecedented rate. A report from the Comissão Pastoral da Terra (CPT) shows that in 2015, 50 rural workers were killed in conflicts related to land reform – the highest level since 2004. In the first five months of 2016 alone, 23 rural workers have already been assassinated. Among them were two activists of the MST who were killed by the State police of Paraná in an ambush that left six other activists injured.[3]

The unjustified incarceration of members of the MST reflects a clear intention of State forces to criminalize social justice movements in Brazil, in the context of the resurgence of the conservative forces during the impeachment process against Dilma Rousseff. What we see today in Brazil is a clear expression of the class struggle in the country, deeply rooted in its colonial past. A ruling by Brazilian Courts to prosecute the MST as a criminal organization would set a dangerous precedent and open a new era of State violence against social justice movements, organized or not, in Brazil.[4]

Here you can find the official statement from MST.