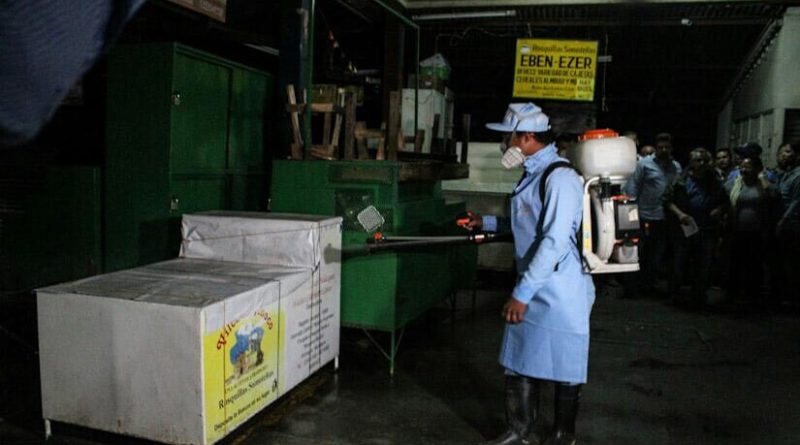 “He’s not a doctor, I don’t think.” Trump had just finished a phone call with Juan Orlando Hernández (JOH), the de facto president of Honduras who runs a  narco-state[1]. On April 30, JOH was indirectly implicated in drug and murder charges by the US Justice Department[2] in a case against a former chief police officer. This is merely the latest of several cases in which he is alleged to be involved, that include drug trafficking and money laundering[3],  as well as  protection of drug dealers[4]. The criminal charges have also affected his close family, among them his brother[5], including connections of both siblings with famous narco-dealer El Chapo[6]. His sister, Hilda Hernández, was also under investigation[7] in Honduras for embezzlement of public funds[8], at the time she died in a helicopter accident.

But as he is also the latest person to support Trump’s controversial views on the use of the antimalarial drug, hydroxychloroquine to fight the coronavirus, he appears to hold a special place among Washington’s closest allies in the region. JOH, it appears, had called to thank him, Trump said, perhaps for medical supplies which the US had sent to Honduras.[9]

While the US props up the regime, public order in Honduras is nearing collapse. It faces the epidemic with a health and social security system that has been drained of resources, both through rampant corruption[10] and because the government prioritises spending on the security forces. When 2,600 of the demoralised medical staff were chosen to tackle the virus, a quarter of them resigned.[11] Hernández has been using la mano dura[12] (the firm hand) to enforce a lockdown and nightly curfews, provoking hunger and repressing the inevitable protests.[13] On April 24, three brothers selling bread were stopped by police[14]: one was shot dead and two injured. Food parcels handed out to some families only contain two days’ worth of supplies. The state is buying medical equipment at excessive prices[15] largely via companies owned by the president’s cronies.[16]

Neighbouring El Salvador’s economy is also seriously stressed by the pandemic. President Nayib Bukele, who ran under the banner of the right wing GANA party, was widely viewed as a reformist[17]  when he took office last June, garnering votes from across the political spectrum. But since the election  he has turned autocratic: on February 9 he threatened the country’s parliament, reluctant to approve even more spending on security forces, by marching troops into the chamber.[18] In early March, when El Salvador still had no confirmed virus cases, he imposed a complete ban on foreign travellers and sent locals returning from abroad into 30-day quarantine in make-shift hostels. A complete lockdown followed on March 22. To compensate those who now couldn’t work, Bukele promised a $300 handout to each family, which backfired when thousands of Salvadorans without bank accounts formed queues outside government offices. When the government could not accommodate the crowds and closed the offices, protests broke out and the security forces were deployed to restore order.

In addition to strengthening the security forces, Bukele seemed to have inadvertently given more power to El Salvador’s notorious gangs, who were enforcing his lockdown with baseball bats.[19] But in the wake of a new peak[20] in El Salvador’s notoriously high murder rate (22 in one day on April 24), he ordered an intensified crackdown on gang members in the country’s prisons.

The “northern triangle” countries of Honduras, El Salvador and Guatemala share common problems. Repressive governments are supported both by the US and by rich elites who disregard the poor majority’s need to work each day to put food on the table. Some 28,000 people[21] have been detained for breaching lockdowns. The traditional safety valve of these countries, migration to the US, has almost closed because of the tough measures introduced at Trump’s insistence, combined with fear of the virus. Hundreds of migrants are being sent back from the US and Mexico every week, exacerbating their countries’ economic crises and bringing large numbers of new virus cases.[22]

Nicaragua, though poorer than its neighbours, has some advantages in fighting the virus: limited emigration to the US, fewer tourists than before – after the violent protests in 2018[23] – and a community-based health system that is accustomed to dealing with epidemics such as dengue. Its approach has been completely different, involving medical checks at the borders, travellers being quarantined and regularly checked for symptoms, testing, and contact tracing. Checkpoints were kept open to minimise informal crossing of the porous land borders, especially from Costa Rica where many Nicaraguans work.[24] Some 250,000 volunteer ‘brigadistas’ were trained to take part in health brigades to dispense advice and identify possible virus cases. Practically every household has been visited, often three or four times. Sanctions bar Nicaragua from receiving US aid or support from the World Bank but it is getting technical help from Cuba, Taiwan and South Korea, all of which had early experience in tackling the pandemic.

As I write, the live map of coronavirus cases in Central America[25] shows 8,880 cases and 286 deaths. By far the majority (6,378 cases) are in Panama, in part because it is the region’s transport hub but also because, as the richest country, it’s better equipped for testing and for producing reliable figures. The second highest, with 771 cases, is Honduras. At the other extreme are Belize with 18 cases and Nicaragua with 14. Belize has closed schools and some businesses but has held back from a full lockdown. Yet only Nicaragua and the other nearby country with a left-wing president[26], Mexico, have been criticised[27] for their voluntary approaches to social distancing. A Mexican market trader’s sign[28] summarises the dilemma facing all the regional governments, whatever their stance so far: “It’s hunger that’s going to kill me, not the coronavirus”.

[1] “Hondurans React to Bribe Offered by El Chapo to President: ‘We Live in a Narcostate’,” https://www.nytimes.com/2019/10/03/world/americas/honduras-juan-orlando-hernandez.html

[7] “Exclusive: A Pandora’s box of corruption in Honduras,”https://www.univision.com/univision-news/latin-america/exclusive-a-pandoras-box-of-corruption-in-honduras