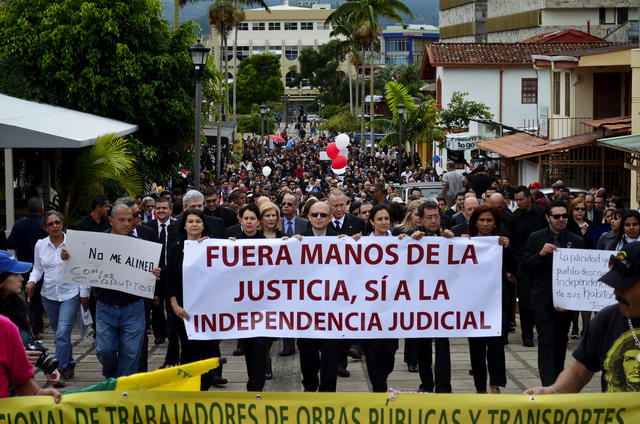 Costa Rica, a country that only occasionally justifies the nickname, “the Switzerland of the Americas,” witnessed last month a sobering blow to its democratic reputation with an ugly dispute over a Supreme Court judge’s reappointment. For the first time in the country’s patriotic history, a coalition of lawmakers headed by President Laura Chinchilla’s National Liberation Party (PLN) initiated an all-but-forgotten voting mechanism in an attempt to block the politically independent judge Fernando Cruz from continuing his legally appointed clerkship in the Supreme Court’s Constitutional Chamber (known as Sala IV).

Conventional wisdom has amassed that Cruz’s independent, if not frequently left-of-center judicial rulings on a series of important cases have routinely clashed with today’s neoliberal, even conservative tendencies of the PLN, which exists as a shell of its once progressive foundations. Whereas the PLN was once the progressive beacon of San José, today it sputters from years of allegations of corruption and influence peddling.  The Supreme Court almost immediately joined the justifiable public outcry to keep Cruz on the bench, where he has served since 2004. As a Supreme Court Penal Branch member recently stated, Cruz has become a, “scapegoat…who has angered political sectors with his decisions.”1 Sala IV has repeatedly drawn the ire of Chinchilla’s administration due to its rulings on many of Chinchilla’s bills in the Court. In April of this year, Cruz voted to strike down a fiscal reform bill––the signature piece of Chinchilla’s administration––that carried concerns of disproportionately weighted tax obligations for the country’s poor.2 He has repeatedly dissented against the liberalization of the Costa Rican domestic market, and was an opponent of both the Central American Free Trade Agreement and a controversial 2010 Canadian mining project.3 Most recently, on November 28, Sala IV struck down a spending measure of the country’s 2013 budget, which one opposition lawmaker described as a “blank check” to a Chinchilla administration rife with corruption allegations.4 None of the lawmakers who voted against Cruz’s reelection gave a specific reason for their vote, but the silence so far has only succeeded in furthering the breakdown of the public’s confidence in its political institutions.

A Surgical Legislative Attack on Cruz

According to Costa Rica’s constitution, judges sitting on the Supreme Court bench serve eight-year terms in office, at which point they will be subject to being vacated. To “win” reelection, however, the judges face legislative scrutiny rather than a public vote. The only way a judge can “lose” a reappointment process is if the Legislative Assembly bars a subsequent term by a two-thirds majority. The legal measure allowing for this legislative oversight is known as Act Number 99.

On November 15, with a vote margin of 38-12, a PLN-led coalition in the Legislative Assembly defiantly executed Act 99 for the first time against a Sala IV judge’s previously automatic reappointment.5 Several statements made by lawmakers suggest that the vote’s primary goal was to intimidate to the Court. Siany Villalobos, a PLN lawmaker who voted to end the judge’s term, said the goal was to, “send a message,” while another lawmaker said that he voted to “protest against the [country’s judicial] system.”6 Cruz himself has remained composed and restrained, given the circumstances, although he admitted in the days after the proceedings that he, “hopes the [vote] is not the first step towards a ‘democratic dictatorship.”7

While the coalition’s efforts passed in Legislative Assembly, Cruz returned to work on November 26.8 In the days following the original vote, after dissenting lawmakers introduced a hasty appeal to the decision, the chamber voted to still uphold Cruz’s termination, albeit with 12 fewer votes. The outcome is now up to Cruz’s fellow judges within Sala IV to decide the legality of such vote to begin with.9

According to the country’s constitution, the vote to block Cruz from his subsequent term was illegal. While Cruz’s term ended on October 18, per the constitution, the Assembly’s lack of a vote prior to this date automatically qualified the judge to his new term. (The vote to oust him came almost a month after his term expired, on November 15). Thus, the use of Act 99 to block Cruz took place after he had already technically been “reelected” into his next term. Given that this is the position that Sala IV has tried to promulgate, Cruz will almost certainly be reelected to his seat. A clearly irked Victor Granados, president of the Legislative Assembly, has also recognized this certainty in his recent comments to the media.10

Whether or not Cruz keeps his seat for good is a minor issue compared to the high theater that has afflicted Costa Rican governance in recent weeks. Observers are now questioning the basic integrity of the country’s three governmental branches and its day-to-day functionality of its separation of powers. Such a crisis bodes poorly for the attitudes of a public already dissatisfied with President Chinchilla and a government routinely associated with corruption and inefficiency. (The most recent “State of the Nation” feature from San José’s primary media organ, La Nación, gives a negative assessment to Chinchilla’s government thus far in her four-year term.)11

Costa Rica’s lawmakers are certainly within their right to block the appointment of a judge, but the case against Cruz carries a point that suggests the vote in the legislative body (specifically by the PLN) overstepped its bounds. Given that Cruz has presided over cases as a non-partial observer, he is thus a worthy adherent to the Court’s stated mission of judiciary independence. In a rousing defense of the embattled judge, last month Supreme Court President Luis Paulino Mora claimed that Cruz is, “independent, honest…[and] recognized as one of the best jurists in the country.”12

Many in the Costa Rican public appear to agree. On November 24, a crowd gathered outside of the judicial building and held a vigil for Cruz, a large number of the attendees dressed in symbolic black.13 Many of the other remaining 21 justices in the Supreme Court labeled the month “Black November,” or the “Dark Days,” and, if the Cruz vote is any indication, it appears the embattled judges feel as if they are in the crosshairs of Legislative political retaliation.14

Somewhat expectedly, Chinchilla has denied any involvement in the controversy, a position that is becoming all-too-familiar for observers of the characteristically lame style of Costa Rican politics. She has denied the allegation that it was her party’s backdoor way of enacting revenge against this particular judge, but she did mention, somewhat euphemistically, that she had communicated with legislators before the vote, “about the role of Sala IV.”15 Moreover, several lawmakers claimed the minister called members of the PLN before the vote in order to “orient them” on Chinchilla’s position.16 If the degree to which the PLN’s involvement is true, then the revelation only reinforces the perceived notion that Chinchilla’s unpopular administration did not stifle, but rather stoked the existing flames now burning between the country’s governmental branches.17

While the PLN, and ultimately the president, have every right to raise questions on the merits concerning appointments to the judiciary, it is a hard argument that Cruz has engaged in conduct to warrant any drastic action. What occurred last month regarding Cruz has come about in an unprecedented manner, even for a country like Costa Rica, whose reputation has also outreached its perpetuity when it comes to matters of corruption. Moreover, the PLN’s perceived attack job on Cruz inadvertently levers Chinchilla’s administration into a badly unwanted crisis, which does nothing to issue confidence for the improvement of her presidency. Analysts are now whispering that she is acknowledging to a nation that has witnessed at least 632 protest incidents over the last year that the country’s political party system “is collapsed.”18 On November 28, Chinchilla, Granados, and Mora represented their respective executive, Legislative Assembly, and the judiciary branches in a public appearance advocating for the improvement in the function of the State’s powers. While this was simply meant to be a symbolic measure to hose down the political wildfire within San José, it is unlikely to change the relationships between the branches.19 One would like to root for Chinchilla, given her historic ascension as Costa Rica’s first female president and occasional progressive bone, but she provides little reason to do so. At this point in her term, the least she can do is try and salvage the credibility of the public institutions she leads, and the motivations that her party is supposed to have.

Trent Boultinghouse, Research Associate at the Council on Hemispheric Affairs