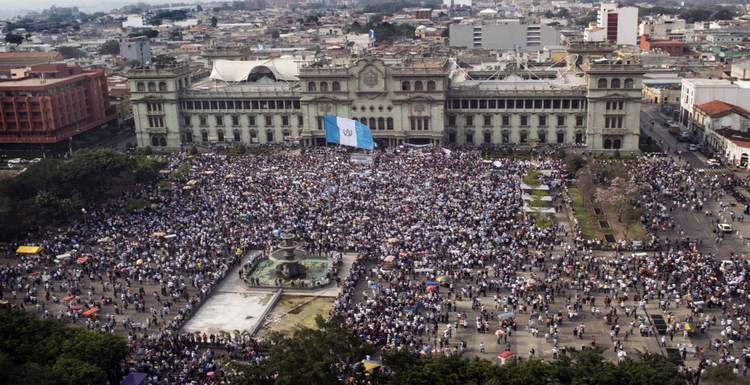 The International Commission Against Impunity in Guatemala (Comisión Internacional contra la Impunidad en Guatemala, CICIG) was created on December 26, 2006 under the Óscar Berger administration. As an independent body, the commission was charged with supporting the state criminal justice institutions in their investigation and prosecution of serious crime in Guatemala.[i] On April 23, Guatemalan President Otto Pérez Molina announced in a press conference that he requested the United Nations to extend the mandate of the CICIG by two years. The president declared that the commission is for the good of Guatemala and that this decision was in response to the call of Guatemalans for more security and justice.

This edict comes after President Pérez Molina had hinted at allowing CICIG’s mandate to expire, and had resisted diplomatic pressure applied by U.S. Vice President Joseph Biden using Washington’s aid package to Guatemala as leverage. However, the president also faced domestic pressure for a renewal of the CICIG mandate after a national panel assessed the commission. The panel concluded that CICIG should be extended for two years in order to continue its substantive work in improving Guatemala’s abilities in investigating and breaking up organize crime.[ii]

Corruption and Impunity in Guatemala

Impunity for corrupt officials is particularly prevalent in the Guatemalan political and judicial systems. In 1986, during Guatemala’s transition to democracy, General Hector Gramajo proposed his Thesis for National Stability.[iii] This formula encouraged the creation of a coalition between the military and businesses, which included the management organized crime syndicates, in order to control the State and, by extension, the justice system through violence and corruption. This governance framework continues to influence the State in Guatemala today.

Since 2007, the CICIG has produced impressive work combating the issue of corruption, leading to investigations and trials of former presidents, police head Erwin Sperisen, and former Interior Minister Carlos Vielman, as well as indicting Byron Lima, one of Guatemala’s most well-known criminals, for extorting people from within prison with the aid of the head of the prison system.[iv] These are fundamental steps in the fight against impunity in Guatemalan politics, making corruption more costly and, therefore, less likely to be engaged in by public officials.

Most recently, on April 16, the CICIG and the Guatemalan Attorney General office announced the arrest of 21 people, including Alvaro Omar Franco Chacón, the head of the state tax agency (Superintendencia de Administración Tributaria, SAT), along with its former director, Carlos Enrique Muñoz Roldán (2013-2015), charged with being involved in a tax fraud corruption scandal totaling an estimated $130 million USD. The defendants also stand accused of involvement with the contraband ring known as “La Linea.”[v] An arrest warrant was also issued for now-fugitive Juan Carlos Monzón Rojas, the private secretary to Vice President Roxana Baldetti, who allegedly heads “La Linea” and the acting head of SAT, Claudia Méndez Asencio Azucena, who was dismissed on April 28 for failing to report anomalies in the organization’s operations.[vi]

The recent corruption scandal has resulted in an exodus, led by 2015 presidential candidate, Alejandro Sinibaldi, within the ruling Partido Patriota (PP), which has affected the party’s presence at all levels of government. The scandal has further threatened the PP’s position by triggering protests on April 26 in the capital and, according to local media outlets, the departments of Quetzaltenango, Cobán, Alta Verapaz, Huehuetenango, San Marcos, Petén, Mazatenango and Sololá. Tens of thousands of people turned out for an independently organized anti-government demonstration in Guatemala City in the wake of rampant government impunity on corruption.[vii] The protesters, of all social and political backgrounds, called for the resignation of President Pérez Molina and Vice President Baldetti.

Equally essential to curbing impunity in Guatemala today is addressing historic impunity. For example, the trial of former head of state Efraín Ríos Montt, who ruled through violence and repression from 1982 to 1983, and his head of military intelligence, Mauricio Rodríguez Sánchez must not be allowed to be continuously delayed over procedural matters.[viii] Both men have been charged with genocide and crimes against humanity for their part in at least 15 massacres leading to the deaths of 1,771 Ixil Maya people that could be identified, with the number of unidentified persons that were killed being much higher.

Ríos Montt was convicted in a 2013 trial, but the decision was annulled by the country’s Constitutional Court. The decision by the pre-trial judge, Carol Patricia Flores, was widely seen as being influenced by the networks within the military-political alliance in Guatemala.

While a new trial has commenced, challenges, such as Ríos Montt’s claim that he is too ill to attend the trial, and his motion to recuse Judge Irma Jeannette Valdez as tribunal president on the grounds of bias, have already been presented and the trial has been suspended for a second time.[ix] In order for the Guatemalan government to gain even limited legitimacy and cast aside its legacy of impunity, it must confront the past and not allow individuals such as Efraín Ríos Montt to skirt justice.

Strengthening the Justice System: The Role of CICIG

Still, it is important that the CICIG continues its work to strengthen the criminal justice system of Guatemala. With rampant corruption and weak witness protection programs, Guatemala’s criminal justice system has proven itself incapable as 98 percent of crimes do not result in prosecutions.[x] However, the CICIG’s $12 million USD annual budget must be restructured in order to implement real change.

The CICIG must begin to invest in longer-term reforms to identify and solve the structural issues that Guatemala faces in its political and judicial systems. Education and training for the Public Prosecutor’s Office (Procuraduría General de la Nación) and the National Civilian Police (Policía Nacional Civil) must be prioritized to build a moral policing culture and develop a system of external oversight for officers. These training programs are also necessary to hold supervisors accountable for their actions as well as those of their officers.[xi] Additionally, officials are often motivated to act corruptly as a result of fear, which makes ensuring the safety of judges, prosecutors, defendants, and witnesses paramount.

While it is true that the CICIG is limited in the extent of reform that it can bring to Guatemala, it has lent itself to the strengthening of the country’s fragile judicial infrastructure. Still, external assistance can only do so much, the solution to the structural issues that Guatemala faces must be a Guatemalan-driven one. Substantive changes in Guatemala will only occur when those in power commit to fair, transparent governance and the protection of human rights for all its citizens. The grip of economic elites and organized crime over Guatemala’s political and judicial processes, which can be seen in the creation of state policy, the selection of public officials, etc., must be broken. Until the structural problems are addressed, impunity and corruption will continue to define Guatemala.