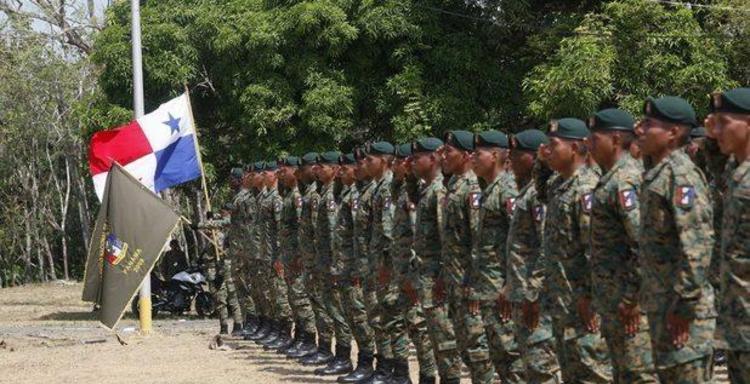 The Constitution of Panamá, amended under President Guillermo Endara in 1994, states unequivocally that “The Republic of Panamá will not have an army.” [1] This measure, one of demilitarization and especially of depoliticization of the military, emerged as a response to Manuel Noriega’s military dictatorship (1983-1989) and the inclination throughout Panamá’s history towards conflation of statehood with military power. The post-Noriega government replaced its military with the Panamanian Public Forces, which operates directly under civilian control and in a clearly defined policing role. [2] The movement to remove military influence on the civilian government saw its goals accomplished in the text of the 1994 Constitution, which is a milestone affecting Panamá’s democracy. Scholar Corinne Caumartin claims that “[e]nsuring that the public security forces no longer played a role in the political arena was the main priority of the Panamanian government in the early 1990s.” [3]

This amendment to the constitution marked a clear break from Panamá’s past of routine military intervention in politics and a reaction to the violence of the U.S. invasion in 1989, which removed the Noriega government. However, in recent years many have noted a re-militarization of Panamá’s Public Forces, connected intimately with the United States’ strategy in the War on Drugs. Furthermore, this militarization can be tied to Panamá’s persistent problems with corruption at high levels of government. The large budgets wielded by pseudo-military forces in the country, combined with their direct institutional link to the country’s current (and notoriously corrupt) President Ricardo Martinelli, lays the foundations for a perfect storm of corrupt practices and systemic centralization of power.

Militarization re-entered public discourse in Panamá in 2004, with the advent of the Martín Torrijos administration (2004-2009). U.S. military training of Panamanian troops was cause for alarm among many of the country’s democratic figures, who also viewed the lack of explicit restrictions on the size, mission, and budget of its paramilitary forces as a flaw in Panamá’s demilitarization process. Torrijos announced his intentions to centralize the security forces, which include the national police, the maritime forces, and the air forces, under the nation’s one umbrella organization, the Ministry of Public Security, despite the fact that separation and dispersal of power was a deliberate part of the country’s efforts to segregate the spheres of the military and the political. [4] This goal was finally achieved on June 15, 2010. The objectives of the new body include “planning, coordinating, monitoring and supporting the intelligence and security sectors that comprise the greatest part of the fight against crime and criminality.” [5]

A diplomatic cable released by Wikileaks reveals that in 2008, the Panamanian media picked up on several events as cues which suggest plans of militarization were brewing. First, Martín Torrijos made a secretive visit to Washington in May of that year. In addition, U.S. Secretary of Defense Robert Gates wrote a letter to the U.S. Congress on May 6 in which he equated the Panamanian Public Forces (PPF) with a military force.  Finally, the appointment of Jaime Ruiz, a uniformed member of the PPF at the time, as the Director General of the Panamanian National Police added more fuel to the fire of speculation. [6]

There is a great deal of evidence that the trend toward militarization did not stop there. The country’s border police, called SENAFRONT (Servicio Nacional de Fronteras, National Border Service), in a parade in November 2012, wore full battle uniforms and brandished rifles, conjuring images of the military under Dictator Manuel Noriega. Direct commercial sales of arms to Panamá more than doubled from $8.5 million USD to $19 million USD between 2009 and 2011, indicating a ramping up of weapons technology.

The budget of the Ministry of Public Security has ballooned, reaching $7.2 billion USD in their budget request for 2014, including $79 million USD for helicopters and radar. [7] Furthermore, counter-drug assistance has quadrupled since 2009, now reaching about $8 million USD. [8] While these amounts seem miniscule when compared to the titanic budget wielded by the United States military, the increased spending can have a marked impact on the power and conduct of the Panamanian Public Forces. History has shown that those who have weapons tend to use them.

Those close to Panamá’s Public Forces insist that the ramping up in budget has no insidious implications. Their view is that the force is simply becoming more professional. “Both at the border and in the coasts, professional equipment is needed to face drug traffickers with the most modern methods of transporting drugs,” stated Julio Molto, director of the National Police. [9] However, these concerns seem to be largely unfounded. While Colombia’s FARC insurgent movement retains a small presence in the country’s southern Darien province, there is no evidence that their power is growing. Moreover, despite increased budgets for the country’s SENAFRONT border police, drug seizures have actually decreased from 54 tons in 2009 to 35 tons in 2012. [10]  Furthermore, while drug trafficking is an issue, the U.S. Department of State notes that there is little evidence of cartel-type organizations in the country. [11]

Putting aside the danger to democracy posed by escalating military strength in the Central American country, Panamanian militarization also creates ample space for corruption in its government, particularly due to the relatively large amount of funds now being awarded to the country’s Public Forces for new security hardware. Miguel Antonio Bernal, a famed Panamanian human rights activist and professor of political science at the University of Panamá , claims that current levels of corruption are the worst in the past 40 years of Panamá’s history.

In a telephone interview with COHA in late August, Bernal reiterated that corruption in the Central American nation grows daily due to the lack of control mechanisms and an absence of accountability in the country. He compared Panamá to Colombia, where criminal organizations and drug cartels maintain ties to political campaigns. Bernal said that “Martinelli […] has broken all records [of corruption] in terms of his lies.”

The Martinelli administration, in light of numerous corruption scandals, has a notorious reputation for intimidating the media. Recently, Panamá’s head of state made headlines for his supposed ties to hydroelectric dam contracts. The scandal escalated to a full-blown war of words when Martinelli tweeted that his accuser had been fired from a former position for sexual misconduct and charging illegal commissions. [12] In response to repeated threats by government officials against journalists, Panamá fell from 55th place to 111th place (out of 179 countries) on the 2013 freedom of expression ranking released by Reporters Without Borders. [13]

Various levels of corruption divert control away from legitimate institutions, empowering criminal organizations that operate outside the control of the national government with the compliance of crooked officials. Crime, in turn, creates security gaps that cannot be handled by the often ill-equipped civilian police or their procedures. Militarization is one negative result of police weakness and corruption. [14] Furthermore, militarization can also breed corruption, given the steady flow of U.S. funds being pumped into the Panamanian defense budget—funds which provide ripe pickings for cronyism and theft. The Panamanian Public Forces are under Martinelli’s control, with little oversight from external organizations or stakeholders. This lack of oversight combined with prolific economic resources (military installations can be just as profitable as hydroelectric dam contracts), comprise an atmosphere conducive to corrupt practices.  The picture that emerges is a dark feedback loop. As militarization increases, corruption grows, fueling the already expanding criminal sectors in Panamá, and increasing the justifications for further military buildup.

According to a September 3 post on the official website of the Panamanian government, Martinelli approved plans to build a military base near the expropriated territory of Juan Hombrón ( a coastal region in the Coclé district) with the intention of countering drug trafficking in the country. [15] While supporters of Martinelli’s plan accredit the base as an effective way to combat illicit activity, critics point out that a country with no military should not require military bases.

Not long after Martinelli’s announcement regarding the base was made, Professor Bernal, during an interview with Panamanian news program Noticias A.M., stated that the base was “irrational and illegal,” citing a Panamanian law concerning public interest. [16] The law allows for the expropriation of land relating to public interest, such as hospitals or schools. Bernal pointed out that military bases do not fall under that category. [17]

Panamá is not acting entirely autonomously in the growth of its military. Both the United States and Panamá have denied that the bases will be used by U.S. forces, though documents obtained by peace groups within the United States indicate otherwise; aside from investing millions in comparable bases, U.S. drones, spy planes, and various aircraft have been known to operate within the Central American nation. [18] John Lindsay-Poland, author of “Emperors in the Jungle,” a book about U.S. intervention in Panamá, reiterates that the United States is violating the Torrijos-Carter treaties by funding the construction of military installations. [19] Much of this new growth in military activity is  connected to an international, multiagency military operation known as “Operación Martillo.” This initiative is perhaps aimed, on the part of the United States, at regaining a forward operating base in the region after the United States lost its controversial facility in Manta, Ecuador and has made no progress on similar facilities in Colombia. [20]

Panamá presents a troubling trend of militarization in the region. A resurrected and over-empowered military is a direct threat to democracy, specifically in Latin America, where armed forces have a history of interfering with domestic politics. Furthermore, one must consider whether military accountability to a given nation is diminished when funded by an external source that develops disproportionate influence. Similar trends of militarization in neighboring Honduras have resulted in egregious human rights violations and the strengthening of pre-existing ties to criminal organizations. [21] These adverse consequences have the potential to play out in Panamá as well. Militarized policing strategies are not a viable solution to crime and drug trafficking. Rather, they enable corruption and violence that undermine the power of the national government and fill the pockets of a select few while eroding the spirit and letter of local law.

William Kinney and Thomas Abbot, Research Associates at the Council on Hemispheric Affairs