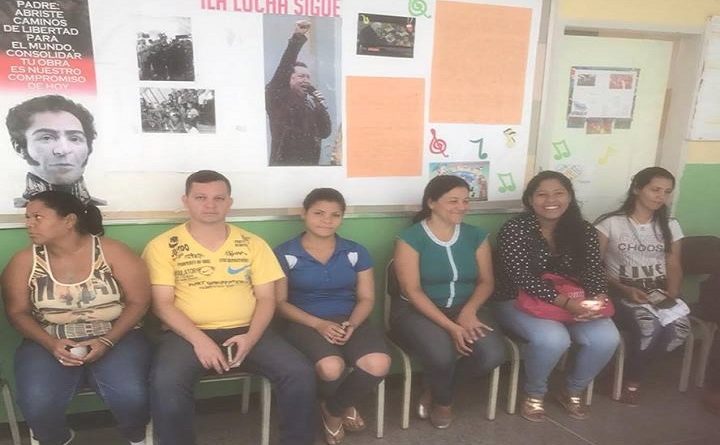 Today Venezuela is holding a vote for representatives for the new Constituent Assembly, tasked with modifying and amending the Venezuelan constitution. President Nicolas Maduro called the vote in May, presenting it as a possible solution to the country’s ongoing political and economic crisis. Despite charges by the US backed opposition, Democratic Unity Roundtable (MUD), and the Almagro bloc in the Organization of American States (OAS) that this vote constitutes an illegal power grab, the situation in Venezuela is far more nuanced than pro-opposition narratives present it. Certainly, despite a significant opposition movement, Chavismo still holds widespread support across Venezuela, and any peaceful solution to the ongoing situation needs active dialogue between the two sides, something that is hindered by external efforts to threaten Venezuela and delegitimize the vote in totality.

Just this Friday the Secretary General of OAS, Luis Almagro, uploaded a video to twitter in which he characterizes the constituent assembly as “without constitutional power” and “illegal”.[i] To justify this he cites article 347 of the Venezuelan constitution which states: “The original constituent power rests with the people of Venezuela”.[ii] What this argument fails to note is that the very next article in the constitution clearly provides: “The initiative for calling a National Constituent Assembly may emanate from the President of the Republic sitting with the Cabinet of Ministers”.[iii] Moreover some constitutional experts such as left-wing Jesus Silva R., Doctor of Constitutional Law, have laid out the case that the constitution does give the president the prerogative to call the constituent assembly provided that final approval of any proposals are subject to a national referendum.[iv] While there is reasonable ground for debate over the wisdom of holding this process in such a highly polarized political context, threats from Washington of further sanctions should the vote proceed have served to harden positions and could undermine any further prospects for a mediated dialogue.

United States Ambassador to the United Nations Nikki Haley has already announced that the United States will not recognise the results of the vote today.[v] President Trump has also threatened the Venezuelan Government with, “Strong and swift economic actions” if the Maduro Government does not cancel the vote.[vi] Such statements by Trump are a clear threat to Venezuela, and no government has the right to violate the sovereignty of another nation by penalizing it for following its own constitution. The President of Bolivia, Evo Morales, summarised the feelings of many on the left in Latin America when he tweeted that U.S government intervention bears the risk of pushing the country into full-blown armed conflict.[vii]

On top of threats by President Trump, there is also evidence of attempts to disrupt elections internally. This morning a candidate for the assembly, José Félix Pineda Marcano, was killed by an armed group in the state of Bolivar.[viii] The Minister of Defense, Vladimir Padrino Lopez has also reported the destruction of over 100 voting machines across four states.[ix] Footage from Saturday also shows civilians destroying election materials in Tachira.[x] Anti-government extremists also set off a bomb in Caracas that injured several policemen.[xi] The MUD has stated that it has no intention to sabotage any of the electoral proceedings, but a clear public repudiation of such acts could give this position more credibility.[xii] Despite what many media narratives suggest, elements of the opposition are willing to attempt to sabotage the elections, and use violent tactics to obtain their goal of removing Maduro from power.

That is not to say that violence has been solely carried out by the opposition. Pro-government groups have also been involved in violent actions across the day. Ricardo Campo, a youth secretary for the Democratic Action Party, part of the MUD, was killed this morning while protesting in the state of Sucre.[xiii] Several other anti-government protesters have been killed by extreme pro-government gangs, with at least five people killed in the state of Merida.[xiv] The violence on both sides reflects the deep polarisation of Venezuelan society, and the difficulty of moving forward towards a peaceful solution.

There are also reports that public sector workers are facing pressure from the government to vote in the election. Reuters has reported that PDVSA vice president Nelson Ferrer stated that “Any manager, superintendent, and supervisor who tries to block the Constituent Assembly, who does not vote, or whose staff does not vote, must leave his job on Monday.”[xv] That said, Daniel Kovalik, a professor of International Human Rights at the University Of Pittsburgh School Of Law, witnessed the voting process in Vargas State and reported great enthusiasm among voters. He reported to COHA that he had, “witnessed the quiet resolve of the Venezuelans in the hot sun to vote in the face of threats by the US”. Many Venezuelans still believe in the ideals of the Bolivarian Revolution, and the United Socialist Party of Venezuela (PSUV), despite having lost ground in the legislative elections of 2015, still holds a real base of support in the country. Any peaceful resolution in Venezuela requires a broad national dialogue that provides all parties with a voice, and should not be mediated by nations and organizations that have explicitly stated their partisan biases.

[ii] “Message from the Secretary General on the call for a Constituent Assembly in Venezuela”, Organization of American States, May 2 2017, http://www.oas.org/en/media_center/press_release.asp?sCodigo=S-007/17

[iii] “Constitution of the Bolivarian Republic of Venezuela” http://www.venezuelaemb.or.kr/english/ConstitutionoftheBolivarianingles.pdf

[vi] Nicholas Casey, “As Venezuela Prepares to Vote, Some Fear an End to Democracy” The New York Times, July 29 2017, https://www.nytimes.com/2017/07/29/world/americas/venezuela-nicolas-maduro-constituent-assembly.html