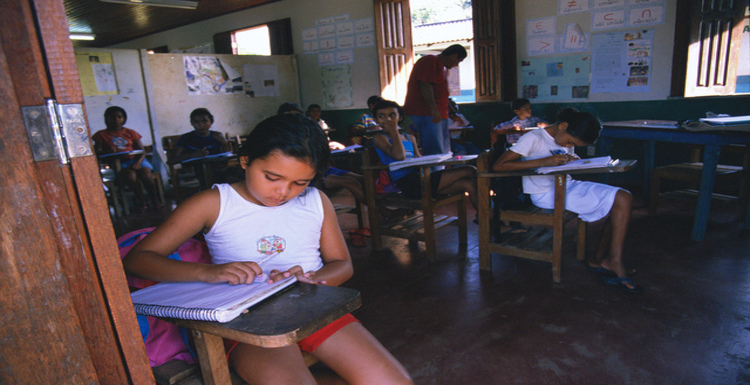 By: Paul Gioia, Research Associate at the Council on Hemispheric Affairs

Latin America, along with Southeast Asia, is one of the most dynamic economic regions in the world. It has experienced great progress in education in the past decades, especially the last one. Additionally, the region has enjoyed steady economic gains as of late, averaging a rate of 3.7 percent in annual growth since 2005.[1]

Has this economic growth spread and led to other sectors? Social progress in education is hard to measure; illiteracy, enrollment, and the average number of years spent in schooling are often reliable criteria in determining its development. In recent years, Latin American countries have all displayed positive evolution in these indicators. The region’s literacy rate, for example, has reached an average of 89.6 percent. Even though the link between economic growth and education is difficult to evaluate, it is generally acknowledged that investment in education has a substantial impact on growth within countries.

If a country is nearing the technological barrier, it should invest in universities; on the other hand, if a country is catching up with the rest of the world, it should invest in primary and secondary education. Thus, it is important to evaluate the relative share of spending in primary, secondary, and tertiary education. This analysis will offer evidence arguing that these relative shares might also help reflect democratic degree in a given country. Furthermore, it will compare Latin American giants with similar countries to be found in South-East-Asia.

The following table provides a brief review of the situation for Latin America and Southeast Asia when it comes to various indicators of economic growth (data from October 2014):[2]

Argentina, Brazil, and Mexico reflect some of the most powerful Latin American economies in terms of GDP per capita. Meanwhile, Thailand and Malaysia are likely to be in the same range of performance.

Franko Patrice, a specialist in development economics in Latin America, stated more than ten years ago that there was a gap in education levels between Latin America and Southeast Asia. At that time, Southeast Asian countries were spending more money, and have yielded better results in education than Latin American giants.[3] The present analysis aims at assessing if the situation that F. Patrice described has significantly evolved since then. As a result, all of the charts have selected the exact same countries. Comparing countries has always been a delicate exercise, and the data above remind us that in terms of macro development data, Argentina, Brazil, Mexico, Thailand and Malaysia share some characteristics that often lead researchers to rank them in the same group of developing countries.

Considering recent data from the World Bank, it seems that Latin America may have caught up. 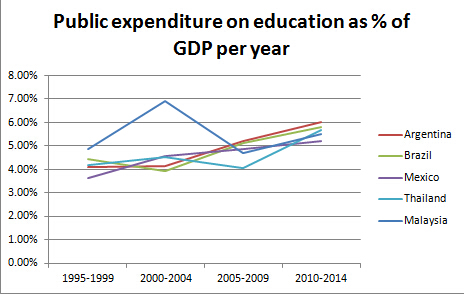 The chart displays public expenditures on education in the five countries selected in the analysis. Public expenditure is expressed as a percentage of GDP per year, which enables to avoid comparing absolute figures.

In accordance with the observations of F. Patrice for the beginning of the 2000s, it seems that Latin America has indeed leveled out the playing field. Between 2000 and 2004, Thailand and Malaysia held the lead in terms of relative public expenditure in education as compared to Mexico, Brazil and Argentina. However, there is an evident convergence that leads each selected country to spend between 5 and 6 percent of its GDP per year a decade later.

In light of these statistics, it appears that Latin American giants have been able to take advantage of the economic growth in order to allocate more resources in education. And they appear to uphold the strategy:[4][5]

It is important to note that the allocation of money within educational budgets bears a good deal of political implications. An egalitarian democratic principle lies in the fact that taxes never should be seen as being regressive: an individual A earning a higher income than an individual B should not pay out any less in taxes or receive more subsidies from the state than individual B. However, some economists point out that some allocations of public budgets were in fact regressive. Indeed, this is generally the case for tertiary education expenses, given that the majority of the students in colleges or universities come from advantaged social backgrounds. Therefore, subsidizing universities results in subsidizing students who are already favored regarding their social origins of these favored cohorts.

In the case of Latin America, it would be useful to observe the evolution of expenditure in primary, secondary, and tertiary education.[6] 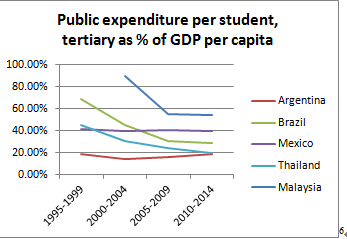 A few results arise from this data. Firstly, Mexico and Malaysia have recorded very high expenditures in tertiary education, while their enrollment rates in this sector are very low in comparison to other countries.  Mexico is the only country where the percentage does not decrease. 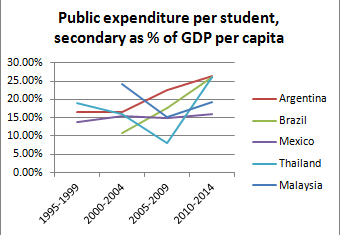 This trend is confirmed in analyzing the state expenditure on secondary education.[7] Argentina, Brazil, and Thailand surprisingly allocate almost exactly the same percentage of their GDP per capita to this sector of their education whereas, once again, both Mexico and Malaysia relatively allocate significantly less of such resources. 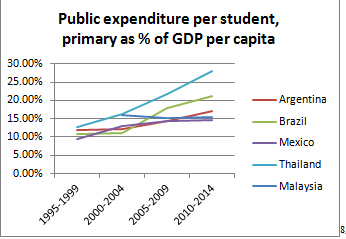 Differences appear even more pronounced upon considering the importance of education for very young children: the “HighScope Perry Preschool Study” analyzed a few years ago two 4-to-5-year-old groups of children in the United States: one group went to kindergarten for a year while the other did not. The children grew up and when they turned 27 years old, the researchers observed their level of scholar education, what the nature of their job was, and their level of delinquency as well. It resulted that the group of children who went to kindergarten earned way more on average than the other, spent more years in school, and recorded substantially lesser levels of delinquency. Restricted to the United States, this study demonstrates the impact of early education on the scholar and the social destiny of individuals and consequently the importance to properly allocate sufficient resources to this sector.[9] It is an assumption of this analysis that such conclusions are widely shared in Latin American countries.

All in all, this data demonstrates that Mexico, along with Malaysia, tends to be less democratic in their allocation of resources in education than Thailand, Brazil and Argentina. Particularly, it seems to indicate that socio-economic elites in Mexico and Malaysia benefit from a direct access to political decision processes, enabling them to protect and foster their interests; allocating money in sectors from which they benefit.

Once again, it can be shown that voter turnout data for the five countries seems to confirm this assumption.[10]

Both Mexico and Malaysia recorded voter turn-out rates below 60 percent. Thailand’s relatively low rate can be explained by its frequency of parliamentary elections. Thailand has held ten elections since 1988, whereas Malaysia has held six. It is important to note that voters who abstain rarely represent the richest people in a society, which speaks for one element of the substantially important political power of social and economic elites in Mexico and Thailand.

Far from being perfectly democratic, Brazil and Argentina nevertheless exhibited a clear tendency to reallocate resources towards a more egalitarian distribution grid regarding education expenditures in the past decades. Mexico, on the contrary, does not seem to follow the same path.

Dr. Lorenzo Meyer argues that Mexico is currently an authoritarian democracy, with “relative freedom of [the] press”, but a highly concentrated media and television industry in the hands of rightist parties, being related to the National Action Party and the Institutional Revolutionary Party (PRI). [11] The latter, according to Meyer, has been using those networks to generate a high degree of political disinterest among a segment of the Mexican population, which would constitute part of an explanation for low turnout rates. Additionally, to explain the substantial political power of economic and social elites in Mexico, it is important to remember that the right-wing (PRI) held power in the country for 74 years since 1929. A change in parties in 2000 did not affect political institutions of Mexico, and the PRI returned to power in 2012 under the government of Enrique Peña Nieto. Moreover, at the local and state levels, the PRI has maintained controlled of governorships and municipalities.

The question then becomes: regarding education and allocation of resources in other sectors, will the tendencies described above continue in the next few years in Latin America?

President Dilma Rousseff has been contested by the poorest segments of Brazilian societies since 2011. Her government has faced multiple corruption scandals, most recently due to Petrobras[12], and social protests arose in 2013-2014. Brazil’s economic growth recently slowed down comparatively to the last decade. It is not yet clear if this is going to severely impact and stop the egalitarian path that Lula had opened and which his protégé, Dilma Rousseff, has apparently followed

In Argentina, the upcoming presidential elections in October could represent the end of Kirchnerism in the country; that is, the end of the political path that Argentina has followed since 2003 when President Cristina F. de Kirchner’s husband, the late President Nestor, won the presidential election. In any case, considering the current credible candidates, the winner is likely to be more conservative than Cristina F. de Kirchner. Florencio Randazzo, Daniel Scioli, Sergio Massa or Mauricio Macri are the most serious contenders to the presidency and they all advocate for a reduction of State intervention in the economy. If this actually happens, it might undermine the social movement for equality that Argentina has developed in the country since its 2001 economic crisis.

As for Mexico, the 2012 election of Enrique Peña Nieto represents the return of the PRI. The scandals that have erupted since the election, like the massacre of the 43 students in September 2014, have left little room for the implementation of egalitarian policies.

After a decade of intense economic growth, during which the majority of Latin American countries were ruled by leftist parties, upcoming elections and current political leaders might reverse the trend towards more egalitarian policies that the region witnessed for more than a decade.  In the educational sector, egalitarian policies will be assessed by taking into consideration the relative weight of primary, secondary and tertiary education.

By: Paul Gioia, Research Associate at the Council on Hemispheric Affairs

[11] “The State of Democracy and Authoritarianism in Mexico after the 2012 Presidential Elections,” Latin American & Iberian Institute, accessed April 20, 2015, https://www.youtube.com/watch?v=we6sXaPIqsQ.