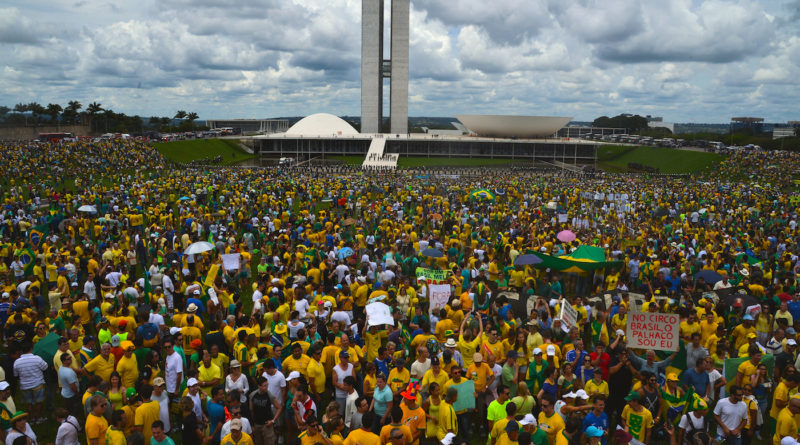 By Riley Zecca, Extramural Researcher at the Council on Hemispheric Affairs

Grand Corruption is defined as “the abuse of high-level power that benefits the few at the expense of the many, and causes serious and widespread harm to individuals and society.” [i] Illegal and closed-door dealings among Brazilian ‘grupos’ or diversified business groups have become a hot-button issue due to Operação Lava Jato (Operation Car Wash); since March 2014, prosecutors have uncovered money laundering, bribery and pay to play between public firms, domestic groups, multinational corporations (MNCs) and politicians with investigations extending past Brazilian borders to include other South American countries, such as Peru and Colombia. Public companies, particularly Petrobras, worked behind the scenes with elected officials and domestic firms, such as Odebrecht, to negotiate inflated, non-competitive contracts in fields ranging from construction and manufacturing to natural resources. [ii] Dollar amount estimates of money lost to corruption continue to rise and Petrobras alone estimate losses to corruption of more than $5 billion USD. [iii]

Petrobras and the “National Champions”

Formed in 1953, Petrobras is one of Latin America’s largest companies. The Brazilian government’s heavy reliance on oil to spur development, balance budgets, and generate profit placed Petrobras in a lucrative position as a middleman between politicians and private industry. Private, domestic firms such as Odebrecht and JBS are known as “national champions” and dominate their respective industries (construction and meat processing) through large market share and overall contribution to the country’s GDP. The term “national champions” stems from an initiative started by former president Luiz Inácio Lula da Silva which channeled subsidies to domestic firms that made them not only competitive, but major players in global business. [iv] While highly important to the well-being of Brazil’s economy, these groups hold coercive power over competitors, suppliers, and clients. [v]

To put the scale and reach of corruption into perspective, three quarters of companies in Latin America with revenues over $1 billion USD are in Mexico or Brazil. [vi] Further, between 1999 and 2014, 57 percent of all foreign bribery cases in Brazil were in the sectors of manufacturing, extractives, construction, and transport/storage. [vii] Considering that these four sectors are the most commonly owned by groups, domestic bribery rates are likely even higher, and growing altogether.

Ultimately, the illegal practices revealed by Lava Jato filled the missing spaces of ineffective or inexistent policy that should have been in place to obviate and guard against illicit behavior. It is important to note that what may be considered illegal bribery in Brazil is often legal and within the bounds of lobbying in the United States. Lobbying reform is urgently necessary in the United States and the negative externalities associated with lobbying should not be discounted or diminished. In both cases, rules for fair competition and transparency are needed to clean up practices that arose in order to facilitate business dealings outside of the legal structure. Not only does corruption lead to the perversion of democratic principles, it also takes a toll on the economic and political well-being of a country. With current and former presidents, along with countless other high-ranking politicians who are implicated in the scandal, Brazil’s prospects for sustained, long-term investment are weak. With a growing budget deficit, the material effect on regular citizens is also alarming. The federal government recently limited social expenditure growth to the rate of inflation, which will hamstring a future government’s ability to adapt to unforeseen economic changes. [viii] Those that are most vulnerable to austerity-related shocks will also be the most likely to miss out on badly needed social programs due to a lack of government funding.

Despite obvious problems with the status quo, a multilateral solution is difficult to develop, considering the scope of corruption across political parties. Of the largest parties, the Partido do Movimento Democrático Brasileiro (Brazilian Democratic Movement Party, PMDB) and Partido da Social Democracia Brasileira (Brazilian Social Democracy Party, PSDB) will be particularly obstinate as they owe much of their support to big business. While the PT has its fair share of politicians implicated in the scandal it is the obvious choice for congressional representation of reform bills as a large party where most of the support comes from the lower and middle classes. Judging by the breadth and entrenchment of corruption, it can be speculated that some workers and middle-class groups have been co-opted through the guarantee of preferential treatment.

In a 2016 Ipsos poll, 90 percent of Brazilians polled felt that, “Lava-Jato should continue with the investigation to the end, at any cost.” [ix] However, optimism that these investigations will yield lasting results is lukewarm, at best. In the above Ipsos poll and a poll by Datafolha in 2017, respectively, 46 percent felt that nothing would come out of the investigation and 44 percent thought that corruption in Brazil would remain at the same levels after the investigation terminates. [x] Much of this disillusionment stems from the aforementioned political capture of those responsible for creating and enforcing legislation. Countless examples of failure exist in the enforcement of Lava Jato allegations, in particular, the two charges against current de facto president, Michel Temer. In both cases, politicians voted to not pursue their enforcement due to a preservation of self-interest and back door agreements. While regular Brazilians prepare for austerity, Temer is doling out public funds to representatives to maintain his hold on power. [xi] On the other side of the political spectrum, the allegations against former President Lula resulted in trials that are now waiting on appeal. As demonstrated with Dilma Rousseff’s impeachment, the rules are not being applied equally along the political spectrum. Unbiased support, or at least the closest thing to it, is needed to prevent these investigations from becoming a political tool of those in power to solidify their position. Whether this takes the form of grassroots organizations, inter-country mediation, or international support remains to be seen. What is certain is that while tangible progress has been made due to the Lava Jato investigation, it is susceptible to subversion and remains only as effective as the people from which it is made.

Funding of these recommendations is important in terms of quantity and efficacy. Too often, reform funding disappears into the very shady practices it was meant to solve. Sizable financial support will be required for the enforcement and monitoring of corruption cases, the Clean Companies Act (CCA) and corporate adherence to changes in decision-making. Passed in 2014, the CCA, “holds companies responsible for the corrupt acts of their employees and introduces strict liability for those offences.”[xii] Ideally, unions will draw funding from their members but with strong opposition expected, financial support for fledgling unions is also needed. Fortunately, effective implementation of reforms will result in partial self-funding. Investigators have already recovered more than $3 billion in ill-gotten gains and anticipate billions more as they continue their inquiries. [xiii] Financial shortcomings would threaten the long-term viability of the Car Wash investigation, the country and the surrounding region and should be assuaged with recovered assets. Forging robust political support and civic cooperation will be the most difficult challenge but also the key to structural change.

Shifting Power from Corporations to Workers

Due to inadequate statute of limitations laws, many white-collar cases drag on for more than 15 years, leaving current victims with no recourse. [xiv] Moreover, diversified business groups are structured to protect themselves from lawsuits in that parent companies are often not responsible for the wrongdoing of their subsidiaries, making it difficult to punish the true authors of corrupt behavior. Those who have the structural control over the majority of Brazilians are so far removed from them that they do not understand or care about their well-being. Workers’ rights are under attack and with less than 20 percent of workers unionized, there is not adequate protection for those who report corporate malfeasance, putting their jobs and voices in danger. [xv] Forging more effective policy is essential to ensure that the practices revealed by Operation Car Wash cease to exist in Brazil. However, proper enforcement supersedes any written mandate. Statute of limitations reform and other policy changes are necessary to erode corrupt politicians’ safety nets and challenge the decision-making power and impunity of groups. Heightened union membership would enable others to come forward to report wrongdoing and provide a unified front in bargaining for higher wages and greater job security.

Brazil is at a critical juncture in history and the path laid down for the future is supremely important. Without a change in policy and proper enforcement, the punishments meted out in Car Wash will fade from memory and another savvy CEO will try to game the system. The systemic corruption uncovered in Brazil illustrates how damaging it can be when domestic conglomerates commit crimes against their own country. Limiting generational control of corporations, empowering workers through stronger unions and better training, and forging strong policies to crack down on Grand Corruption in the political and economic arena will lead to newfound growth. Brazil is an important player on the world stage and can lead Latin America to new heights.

By Riley Zecca, Extramural Contributor at the Council on Hemispheric Affairs