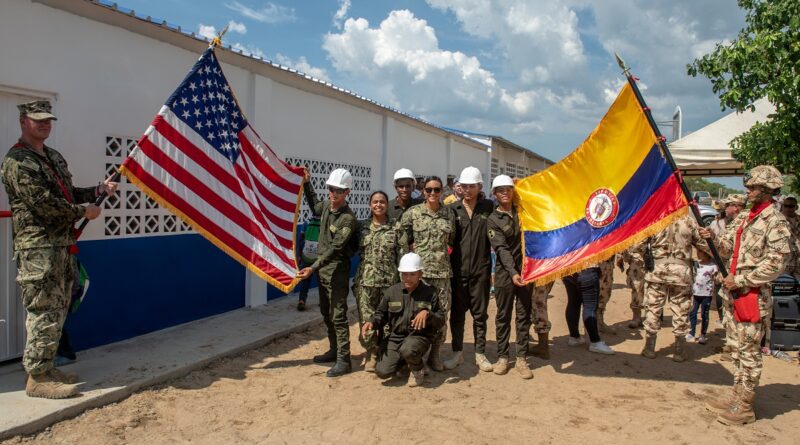 By Danny Shaw
From NY

The human rights group Indepaz reports that 800 activists have been killed in the past three and a half years in Colombia, since November 24, 2016, the date the government signed “the Peace Accord” with the FARC.[1] Taking advantage of society’s fear and distraction, and the demobilization caused by the novel coronavirus, state and paramilitary actors have intensified their violence against organizers and their communities. Human rights activists refer to themselves as “sitting ducks,” explaining that they are pinned down by the pandemic and cannot as easily flee and hide from the forces of repression.[2]

While state and non-state military actors are notorious for violence in Colombia, the police are also guilty of human rights crimes. On May 19, Anderson Arboleda, a 21-year-old Afro-Colombian was beaten to death by the police for supposedly “violating the quarantine” in the Pacific department of Cauca.[3] The police killing of Arboleda — which many compare to the Minneapolis Police Department murder of George Floyd — was not an isolated act. Journalists have found that black and indigenous Colombians have suffered the highest rates of institutional discrimination and police violence.[4]

Human Rights Watch conducted an investigation into Colombian police violations of the rights of peaceful protesters the past year as hundreds of thousands of Colombians took to the streets against budget cuts and political assassinations. They found 72 cases of extreme police brutality. No officer was ever held responsible.[5] One of these cases was that of 17-year old Dilan Cruz. On November 23, Cruz was at a protest when he was killed by the Escuadrón Móvil Antidisturbios (the ESMAD or Mobile Riot Squad) which fired live ammunition at him from a close distance.

Colombia now has more than 71,000 cases of COVID-19 and has experienced 2,300 deaths.[6] In Latin America, Colombia trails only Brazil, Chile, Ecuador, Peru and Mexico in terms of the total number of cases and deaths from COVID-19.[7] At El Cumbe Internacional Antiimperialista, Afrodescendiente y Africano (The International Gathering Ground of Antiimperialists, Afro-descendents and Africans) on June 14th, former Colombian senator and lawyer Piedad Córdoba stated: “COVID-19 lays bare the moral, medical and political infrastructure of our country, especially in the poorer Afro-Colombian regions of the Pacific and the Caribbean. Our people have been the most beaten down by the pandemic.”[8] Senator Córdoba went on to speak about the “hurtful image of a young Black man from Quibdó in the Pacific department of Choco who died on a stretcher in front of a hospital without receiving care for the coronavirus.”[9]

Despite this unprecedented public health crisis, president Iván Duque and his government seem to be more concerned with suppressing the freedom of speech of activists, criminalizing  resistance and encircling its neighbor Venezuela than seriously confronting the pandemic.

The negotiations in Havana, Cuba from 2012 to 2016 resulted in a historic peace deal meant to end a 50-year war that cost over 220,000 lives and left 7 million displaced.[10] The centrist presidency of Juan Manuel Santos received a Nobel Peace Prize in 2016 for his role in the negotiations, though none of the peasant organizations on the other side of the war who endured decades of displacement, torture and death were ever mentioned as a candidate for the  prize or in the ceremony. The government promised a Truth and Reconciliation Committee, land reform, reintegration of former guerrilla fighters, demilitarization of the conflict zones and political openings for the left. The June 2018 electoral victory of Iván Duque, a protégé of far right wing Alvaro Uribe, spelt immediate doom for the Havana peace accords. The government reneged on all of its promises and the areas where the FARC once commanded saw the highest rise in politically-motivated assassinations.[11] According to the United Nations, more than 170 former fighters have been murdered since the peace deal was signed.[12]

In response to these charges, Duque and the Colombian media dismissed the FARC dissidents as “narco terrorists,” despite their legitimate status as demobilized non-belligerents.[13]

Analyst, surgeon and the founder of Pueblos en Camino (The People in Motion), Manuel Rozental explains that the rich in Colombia do not want the military conflict to end because war has always been their cover for appropriating land and resources.[14] Colombian elites and transnationals, such as British Petroleum, Occidental Petroleum Corporation, Exxon Mobil, Coca Cola, Drummond and hundreds of others, use the war as a pretext to clamp down on social movements across Colombia.[15] War is their strategy to displace and dispossess. Any peasant or social organizations who stand in their way can easily be dismissed as coercive or criminal elements. Joel Villamizar is one example. Villamizar was a leader of La Asociación de Autoridades Tradicionales y Cabildos U’wa – ASOU’WA. When he was ambushed and murdered earlier this year the media and authorities simply dismissed him as a guerilla terrorist.[16]

According to all reputable data, Colombia is the main supplier of cocaine in the world and the U.S. is the main consumer.[17] The U.S. allegations that Nicolás Maduro oversees a narco government are politically motivated and not backed up by facts on the ground. Approximately 70 percent of cocaine that arrives in the U.S. comes from Colombia via different supply routes, many through the Pacific ocean.[18] The U.S. Navy is surrounding and blockading Venezuela, not to stop the flow of cocaine into the streets of the U.S., but rather to stop the progress of the Bolivarian process.

It is also worth pointing out that the drug epidemic in the U.S. is not caused principally by cocaine but rather by opioids, many of which are legally prescribed by doctors. According to the Center for Disease Control, over 70 percent of the 67,000 overdoses in 2018 were from opioids.[19]

On March 26th, Attorney General William Barr formerly accused the Venezuelan government of “narco terrorism” without even clarifying which drugs are killing Americans and where they come from.[20] This spoke to the political motivations behind the claims which were really trumped up charges designed to provide the legalese to ratchet up the war on Venezuela. Meanwhile, Washington takes no action against the government of Honduras, accused by even U.S. courts of being involved in drug related crimes, including Juan Orlando Hernández’s family and the president himself.[21]

The US Navy sent ships to further blockade Venezuela’s Caribbean coast on April 1[22] and the Southern Command deployed 800 more special force soldiers to Colombia on June 1.[23] This ignited a national debate in Colombia about the question of sovereignty. The Colombian Congress never agreed to allow foreign soldiers into their homeland.[24] Aida Avella, senator of the Patriotic Union party, stated: “The U.S. military cannot enter Colombian territory above Congress to advise the fight against drug trafficking. We reject the use of the country for wars and invasions of other countries.”[25] Lenín Moreno ceded “a new airstrip” in the Galápagos Islands of Ecuador for use by the U.S. military.[26] The U.S. military currently has nine bases in Colombia, twelve in Panama and 76 total in Latin America.[27] The US has deployed between 500 and 1,500 troops to Soto Cano air base in Honduras under the guise of humanitarian and drug-fighting operations.[28] There is also some evidence that the Colombian military may have supported the mercenaries who trained in Colombia before launching incursions into Venezuela in early May in a botched attempt to capture the Venezuelan president.[29]

Distrustful of the government’s commitments, thousands of government opponents have returned to the mountains or sprawling slums of Colombia’s cities.[30] Calling for a second Marquetalia Republic, in reference to the autonomous zones armed peasants held after La Violencia in 1948, rebel commanders like Iván Marquez and Jesús Santrech and their soldiers have taken back to the mountains.

Not all social actors embrace this strategy however. Warning that war is a trap, social movements drafted a letter to the FARC discouraging them from playing into the hands of the state. Around 70 percent of all casualties in the 50-year and running civil war have been civilians.[31]

In an interview on June 16 with Colombia’s Caracol Radio, representative of the Ejército de Liberación Nacional (ELN) [32] and the head of the Dialogue Delegation of the guerilla army, Pablo Beltrán, explained their perspective. Beltrán said the ELN desires a cease fire but not as long as Duque brings in more U.S. soldiers, making a clash with those troops inevitable in Norte de Santander and Arauca on the border with Venezuela. The ELN has expressed that the priority should be alleviating poverty and keeping people safe from the coronavirus.

As the coronavirus impacts the poorest and most vulnerable sectors of Colombian society, there is little trust that Trump’s faithful partner, the notorious anti-Bolivarian Iván Duque, will respond in a comprehensive way to the health and economic needs of the population. Three national strikes convulsed Colombia between November and December last year because of the neoliberal cuts implemented by Duque. Unable to resolve the needs of their own population, the Colombian elites participate in the destabilization of one of its neighbors. The external and internal contradictions of Colombian society continue to sharpen, promising the playing out of a 50-year national liberation struggle Washington has always feared and sought to contain.

[Main photo: Colombian and US military personnel, in a joint program in Riohacha, Colombia. Credit: US Navy, open license]

[7] “Where Is the Coronavirus in Latin America?,” https://www.as-coa.org/articles/where-coronavirus-latin-america

[12] “FARC killings a challenge to peace, but some criticism political: Colombian official,” https://www.reuters.com/article/us-colombia-peace/farc-killings-a-challenge-to-peace-but-some-criticism-political-colombian-official-idUSKBN1ZX2QD

[22] “Trump: US to Deploy Anti-Drug Navy Ships Near Venezuela,” https://www.usnews.com/news/us/articles/2020-04-01/ap-sources-us-to-deploy-anti-drug-ships-near-venezuela

[23] “US soldiers arrive in Colombia under widespread criticism,”

[26] “Galapagos Islands will not host US military base, Ecuador president says,” https://www.thedefensepost.com/2019/06/19/galapagos-islands-us-military-base-ecuador/

[28] “Deep in the mountains of Honduras, few know what this US military task force does,” https://www.armytimes.com/news/your-army/2019/08/12/deep-in-the-mountains-of-honduras-few-know-what-this-us-military-task-force-does/