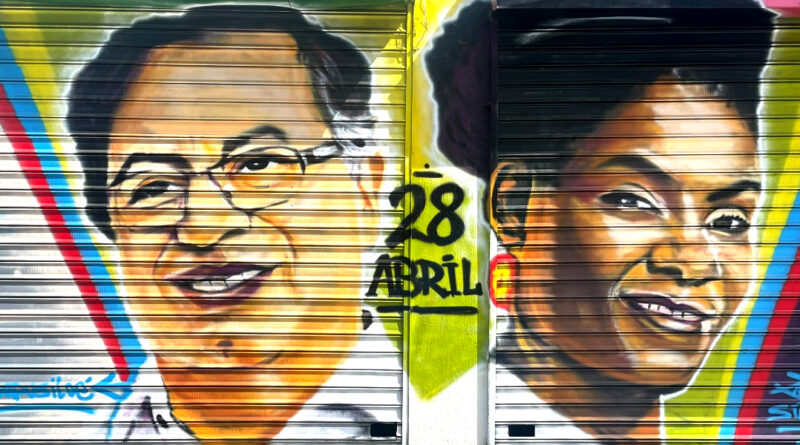 On August 7th a new left of center government will take power in Colombia. Many questions remain to be answered but one thing is clear: this historic election marks a break with a long Colombian history of State violence and monolithic conservatism.

On June 19, Gustavo Petro beat his rival, the businessman Rodolfo Hernández, by a margin of 50.44% to 47.03%, after 100% of the country’s polling stations reported their results.[1] Both his opponent and current president Iván Duque recognized the results, congratulating Petro.[2]

Despite an information war and decades of violence against the left, over 11 million Colombians successfully mobilized and voted for the historic change.[3] La Unión Patriótica (UP) was one leftist political party that suffered from this political genocide. Over 5,000 UP leaders were assassinated, including Bernardo Jaramillo, the UP presidential candidate in 1990, along with 21 lawmakers, 70 local councilors and 11 mayors. It is this reality of state and paramilitary violence that has long earned Colombia the infamous designation as the most dangerous place on earth for union leaders and journalists. Human Rights Watch and the Institute for Development and Peace Studies (Indepaz) have documented the hundreds of assassinations and dozens of massacres that occur in Colombia every year.

Petro is the seventh former leftist guerilla fighter to become president in a Latin American nation, joining Daniel Ortega from Nicaragua,  Dilma Rousseff from Brazil, José Mujica from Uruguay, Salvador Sánchez Cerén from El Salvador, and Fidel and Raúl Castro, from Cuba. However, unlike the others from the list, Petro doesn’t belong to the Bolivarian momentum sweeping across the continent. This outcome of former guerrilla leaders, including Petro, serving their countries as presidents, as well as the recent elections of progressive presidents in Bolivia, Honduras, Mexico, and Argentina, shows clearly the weakness of the neoliberal model that is, so far, incapable of solving the poverty, corruption, hierarchies of domination, and chronic inequality that affects most of the Latin American continent. By electing Petro, the Colombian people are sending a strong message of frustration with a failed model that has brought organized crime, social disparities, chronic violence, a 40% poverty rate and militarization of the public sphere to the lives of millions of citizens.

Leaders of the Continent Congratulate Petro and Márquez

Upon hearing the results of the election, Mexican president Andrés Manuel López Obrador summarized the long history of violence against the popular sectors of Colombia and concluded: “Today’s triumph can be the end of this tragedy and the horizon for this fraternal and dignified people.”[4] Former president of Brazil, Luis Lula Ignacio da Silva, declared the importance of this victory for South American and third world integration.[5] Venezuelan president, Nicolás Maduro, congratulated Petro stating that “new times can now be envisioned.”[6]  COHA Senior Fellow, Alina Duarte, who has been on the ground in Cali covering the elections, wrote “It is impossible not to feel emotion with the victory of the Colombian people. So many years of war, dispossession and death. Today, a Black woman from Cauca, who was a domestic worker, single mother and defender of the land stands strong against oligarchy. What a beautiful day!”[7] 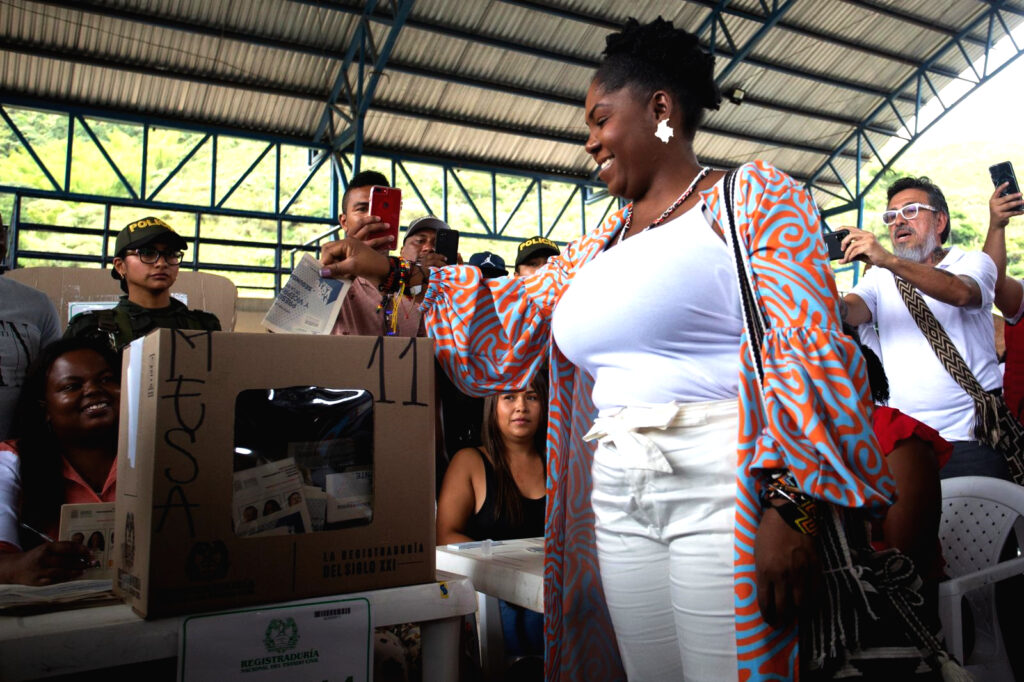 In her acceptance speech Francia Márquez pronounced: “After 214 years we achieved a government of the people, a popular government, of those who have calloused hands, the people who have to walk everywhere, the nobodies of Colombia. We are going to seek reconciliation for this country. We are for dignity and social justice.”[8]

Petro’s speech followed.[9] With the crowd chanting “libertad,” the president elect called for amnesty for political prisoners, environmental justice and an end to impunity for State actors responsible for the murder of activists. He continued affirming: “It is time to dialogue with the U.S. government to find other ways of understanding one another…without excluding anybody in the Americas.” He concluded by promising to build “a global example of a government of life, of peace, of social justice and environmental justice.”

The transition in Colombia, long a U.S. ally in the region, raises major questions about which we can only speculate right now.

How will the new people’s government orient towards the nine U.S. military bases in Colombia?[10]  And how will the new administration, committed to overcoming corruption, confront the reality that Colombia still is the major planetary producer of cocaine, and the main source of the illegal drug in the U.S.?

There are also profound political and economic issues that will be decided in the coming days. Like Gabriel Boric in Chile, Pedro Castillo in Peru and Xiomara Castro in Honduras, Petro and Márquez will now have to balance a left or left of center ideology with the reality of a strong, embedded oligarchy that will fiercely resist all but certain anemic social-democratic reforms.[11]

The new administration will also have to define itself in relation to the Bolivarian cause of regional integration, multipolarity, and sovereignty. Boric has gone out of his way to condemn the Bolivarian camp, and on the largest global stage, at the exclusionary Summit of the Americas. López Obrador and Argentine president Alberto Fernández have been outspoken about building more links with Venezuela and denouncing U.S. unilateral sanctions. Petro seems to be leaning more in the direction of continental unity and a moderate approach to the current wave of progressive administrations, not declaring the U.S. as an enemy but instead trying to change the focus of the relationship to other more innocuous arenas like the environment. Washington seeks to retain its strong influence on Colombia, considering the warm words of congratulations expressed by its Secretary of State, Antony Blinken. Petro’s plan is to limit the oil projects in the country and move to more sustainable resources. However, this will be a main concern for U.S. energy interests, for sure. And it is to be seen how Petro will face the pressure to accommodate the multimillion dollar U.S. private and public security apparatus, including agencies like the DEA, that operate throughout Colombian territory.

At the same time, the movement to which Márquez is accountable voted for Petro because of his commitment to the environment and the historic struggles of Afro-descendant and Indigenous peoples.[12] There is no doubt that Márquez inspired thousands of Colombians from all oppressed sectors of the country, as well as  new young voters, women, and intellectuals who felt moved by this former “housekeeper.” She is the first Black and the first woman ever elected as vice president. But now, the question of the expectations created arises. If the grassroots sees too many compromises with the oligarchy will there be a revolt from within?

Petro and the Troika of Resistance

How will Petro relate to Venezuela, Cuba, Nicaragua and Bolivia? During the campaign, he distanced himself from the Bolivarian camp because in Colombia the vast majority of people have been taught by a  constant barrage of state propaganda that Venezuela, Nicaragua and Cuba are “failed states” and “dictatorships.” In the immediate aftermath of the election, there is great interest in Washington as well as Caracas on Petro’s posture towards Venezuela. In a recent interview, Petro artfully stopped short of all out support for the movement for a definitive second Latin American emancipation[13] but recognized Maduro as President, anticipating enhanced economic links and “civilized bridges” with Venezuela.[14]

On the other hand, it is likely that the U.S. establishment and State Department have not pushed back on the outcome of the election precisely because of compromises made by the Petro-Márquez campaign. COHA Senior Analyst, William Camacaro, cautions that “the worst that can occur is to see a coalition of supposedly leftist governments–Chile, Peru and Colombia–joining Washington’s narrative against the Bolivarian revolution.”

Another major question was raised during the acceptance speeches. Just in the first six months of 2022, 86 social leaders have been murdered by State and paramilitary forces.[15] Last Sunday June 19, shoulder to shoulder with the president and vice-president elect, one of the mothers of the missing students and protestors asked if there will finally be justice for their sons and daughters who have been disappeared.[16] Petro’s ability to put an end to these murders and hold perpetrators accountable will be a major test of his leadership.

The Petro–Márquez victory was clearly a cause for celebration in the streets of Colombia and in the diaspora.[17] But when the fireworks and parties are over the class tensions in Colombia will still abound. The June 19th victory is a moment pregnant with hope for the most vulnerable sectors who have long fought the political and economic domination of the oligarchs and their foreign backers.  But given the long history of oligarchic rule and political capture of significant parts of the State apparatus by organized crime this is also a historical moment wrought with challenges.[18]

[13] The second emancipation refers to the struggle of emancipation from the domination of Latin America by the United States and overcoming the multiple hierarchies of domination that have been imposed over five centuries by colonization, dependency, and most recently the neoliberal regime. This process of liberation involves constructing forms of democracy with popular participation as well as representative governments that prioritize human life in harmony with the biosphere and are held accountable to constituents.The first emancipation refers to independence from Spain and Portugal.