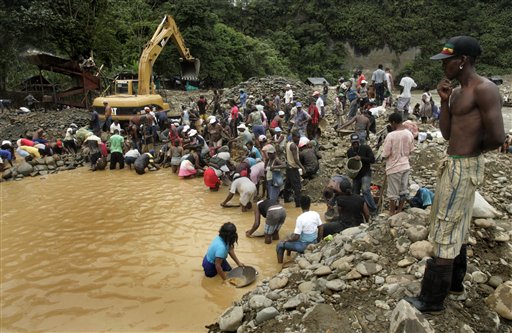 With gold prices soaring to around USD 1,600 per ounce, Colombia has made a concerted effort to stimulate foreign investment in its mining sector.[1] As a result, the Colombian government has favored multinational mining companies over small to medium scale local miners. While this new gold rush represents a significant source of investment and finance for the federal government, it also helps fund Colombia’s four-decade long civil war. After years of government-sponsored eradication, paramilitary and guerrilla armies have begun to abandon coca production and are turning to gold mining, as well as the extortion of mining communities, to generate significant sources of revenue. Moreover, as a result of governmental favoritism, multinational mining corporations utilize national military forces and paramilitaries to harass native populations, local miners, and unionized workers in an effort to force them from their gold-laden lands.

National army protection of work sites is a standard stipulation in mining contracts between the Colombian government and multinational mining companies. However, informal mining operations, many of which have been passed down by families for generations, are left with no protection to defend themselves against the often- extortive practices of paramilitary and guerrilla forces. Moreover, with no clear distinction between informal and illegal mining at the federal level, local miners face the same punitive measures as paramilitary miners.

Paramilitary and guerilla groups, such as the Rastrojos, the Urabeños, the Paisas, the Revolutionary Armed Forces of Colombia (FARC) and the Oficina de Envigado, force local informal miners in the gold-rich Antioquia, Córdoba and Valle de Cauca departments (or provinces) to pay security fees and taxes on mining equipment. These payments quickly become a great source of revenue for renegade military groups. For example, FARC charges 3,800 Colombian pesos per backhoe and a monthly rent and mining site protection fee of up to 141,000 Colombian pesos.[2] In the northern department of Antioquia, the FARC’s 36th Front charges between three to eight million pesos (about USD 1,650 and USD 4,500) for each bulldozer entering territory under its control. Verdad Abierta, an independent think tank specifically focused on the Colombian civil war, estimated there are 2,000 bulldozers operating in an area of 8,500 square kilometers alongside rivers in the Bajo Cauca region alone, which is mainly controlled by the Urabeños and the Paisas paramilitaries.[3],[4] With this booming mining sector, it seems that paramilitary and guerrilla groups have identified new-found fuel for their fire.

The current Minister of Mining and Energy, Carlos Rodado, and president of mining company Mineros S.A., Beatriz Uribe, both agree that at least half of the coal and gold mines in Colombia are illegal.[6],[7] In the Antioquia department alone, 84 percent of mining is non-government sanctioned.[8] Colombian Chamber of Mining (Cámara  Colombiana de Minería) has estimated that the mining industry will lose one billion Colombian pesos, or USD 563,233.69, due to illegal mining.[9] The local poor population is attracted to illegal mining because of its profitability. Local miners are then caught in a catch-22. With no protection from the government, local miners are obliged to pay protection fees to paramilitary and guerrilla groups, and are then marginalized by the government for aiding these rebel groups.

In their quest to belligerently relocate indigenous afro-Colombian communities and local miners, multinational mining companies have become infamous for their under-the-table deals with the Colombian government, military, and paramilitaries. Specifically, Canadian mining companies Greystar Resources, B2Gold and South-African mining company AngloGold Ashanti are just a few of the multinationals that are not averse to using their extreme wealth to threaten, extort, displace, kidnap and assassinate common Colombians in their hunt for gold.

Both AngloGold Ashanti and Toronto-based B2Gold Company have industrial mining sites throughout the southern part of the Bolívar department, which makes up part of the Magdalena Medio region. This volatile area has been plagued with violence and displacement since the peak of coca production in the 1980s. According to Magdalena Medio’s Development and Peace Project, 116,453 people in the region were forcibly displaced between 1994 and 2007, with 53,202 of the displaced individuals from southern Bolívar.[10] Moreover, 2,355 Magdalena Medio civilians died from political violence between 1997 and 2007; 380 of these victims were from southern Bolívar. Between these years, paramilitaries were responsible for 75% of human rights violations, with another 5% of crimes attributed to the FARC, 4% to the Colombian Army and 2% to another Marxist guerrilla group, the National Liberation Army (ELN).[11] The disproportionate amount of political violence and displacement in southern Bolívar is indicative of the pressure put on Colombian communities by multinational mining companies.

While there are no official links between these international mining corporations, paramilitaries, and the national army, on the ground, trade union figures and local community members tell a different story. Human rights groups MiningWatch Canada, Inter Pares and CENSAT-Agua Viva have reported that paramilitaries and Colombian soldiers told local residents that their “operations are designed to protect the interests of international mining companies in the area.’”[12] Paramilitaries and soldiers are simply carrying out the policy of the Colombian government—a policy that greatly enhances the interests of multinational mining companies at the expense of local communities.

Mining and labor unions have been particularly targeted. After the assassination of union leader Alejandro Uribe by the Colombian National Army’s Nueva Granada Anti-Aircraft Battalion in 2006, Teófilo Acuña, president of the Agriculture and Mining Federation of Southern Bolívar (FEDEAGROMISBOL), was falsely arrested for organizing meetings where anti-multinational sentiments were expressed.[13] Moreover, the Águilas Negras, a right-wing paramilitary group, have sent death threats to nine people and organizations, including FEDEAGROMISBOL, because these targets are “’against the presences of multinationals, against the presence of the Army.’”[14] The common Colombian is not receiving adequate protection due to Bogotá’s bias in favoring multinational corporations. Ignoring or financially backing threats, forced evictions, and the killing of local union leaders, as well as community members, signals that the Colombian government and multinational companies are hardly sensitive to civic guarantee, and may even be directly responsible for human rights abuses against Colombian dissidents.

Another Canadian mining company, Greystar Resources, has carried out extensive gold exploration through its Angostura project, operating 55 kilometers away from Bucaramanga the capital city of Santander department. This year, Greystar has been fighting off pressure from environmental activists, small-scale miners, and peasant farmers as a result of its decision to expand the open-pit Angostura mine; this deposit is said to contain more that 11 million ounces of gold.[15]

The Land and Conflict Report by MiningWatch Canada, Inter-Pares and CENSAT-Agua Viva details Greystars’ occupation strategy: the multinational first enters into an agreement with the Army to secure the area, “define the area to be mine[d], put up a military base financed by the company, and buy up the corresponding land.”[16] The National Centre for Indigenous Cooperation asserts that this method is commonly used by all multinationals working in the area. Paramilitaries generate revenue from gaining control of the land and colluding with multinational corporations and sometimes the Colombian government itself (see 2006 “parapolítica” scandal).[17]

By the same token, investigative reporting done by Al Jazeera’s Faultlines has revealed a surge in death threats from the right-wing paramilitary group—the New Generation of Black Eagles—to residents of a small afro-American gold mining community in Cauca.[18] This surge coincides with AngloGold Ashanti’s newfound interest in gold exploration in that region, thereby raising the question of whether or not the multinational is orchestrating these attacks from behind the scenes.

While there should be a vehement campaign against illegal mining, the Colombian government and armed forces must make a clear distinction between paramilitary and guerrilla-run illegal mining, and informal mining. Until Bogotá begins to put the interests of the people before those of multinational mining companies, the Colombian population at large will continue to be victims in this often sanguine, futile quest for El Dorado.