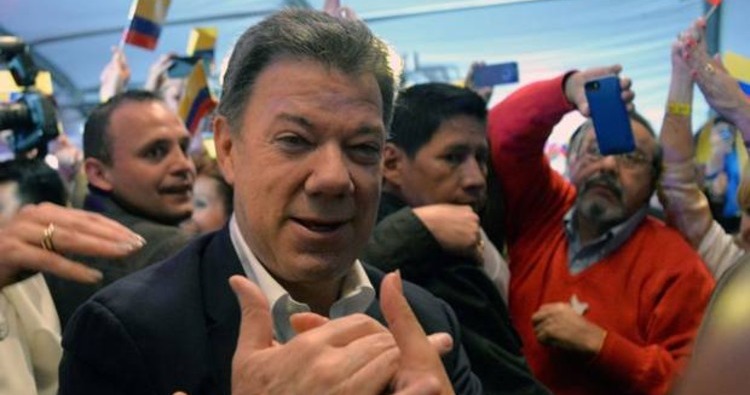 The results are out. Juan Manuel Santos has been re-elected by a surprisingly strong margin as Colombia’s president for the next four years. His victory was more over the Colombian right than over his opponent, Óscar Iván Zuluaga of the Democratic Center Party.

Santos will continue his efforts to put at least a formal, legal end to the longest running insurgency in Latin America, responsible for a huge loss of life and untold suffering in the thousands. The government argued that the Revolutionary Armed Forces of Colombia (FARC) held the country to ransom for over five decades, and is still capable of rendering considerable havoc, even in its major cities. For almost two years now, key FARC negotiators have been in dialogue with Bogotá officials in Cuba. The peace talks have the backing of almost all concerned with Colombia’s present and future. They were also the focus of the election campaign, blotting out issues like the economy. Zuluaga’s defeat represents a massive set-back for the country’s right wing strongman Juan Manuel Santos’ predecessor, Álvaro Uribe, whose anti-FARC sentiments know no limitations.

Even though a large number in Colombia remain profoundly skeptical, there is a good deal of hope. A debilitated FARC came out in favor of Santos, declaring a unilateral ceasefire during the election campaign—something the government refused to do. The Colombian government and the FARC have already reached an agreement on three of the five issues being negotiated. Zuluaga, prompted by the unyielding odium of his patron, former President Álvaro Uribe, committed himself to negotiate a much harder line with the guerrillas than Santos. Zuluaga won the first round, on May 25, with over 29 percent, against less than 26 percent for Santos. The problem then was a record sixty percent abstention. Presented with this stark choice, the country has once again reposed its faith in Santos. He will now have to deliver on his prescription for peace.

Colombia has gone through considerable soul-searching in recent decades. The country remains a conservative haven in a continent undergoing ideological ferment and political churning. The left is resilient in its neighborhood, but has declined in influence. Further afield, the Brazilian model of inclusive development challenges the established Colombian prospects. Investments in extractive industries are not enough for an increasingly educated population in an increasingly globalized world.

Santos has managed to keep the economy on an even keel, as acknowledged in a letter signed and published by several leading Colombian businessmen two days before the second round of voting. Steady growth, controlled inflation, and a currency bolstered by stabilizing inward investment flows will not be sufficient to overcome the suspicions of a generation—or two—traumatized by violence, or the threat of it. The government must also factor in the omnipresence of the longstanding narcotics trade as a greater threat than the presence of guerrillas in the countryside.

The second half of the twentieth century saw an informal sharing of political power between the traditional Conservative and Liberal parties. This followed a decade of violence after the ritualistic assassination of the charismatic leftist leader, Jorge Gaitan in 1948, and a lengthy spell of alternating military rule. This century has seen a change of complexion, both of the right and the left.

Álvaro Uribe (2002-10) redefined conservative politics with his tough, almost merciless personal style, often creating controversy. He founded a new political party, challenging his natural allies, the Conservative Party. Attempts by his political camp to enable his re-election after two terms were checkmated by an establishment in which public institutions, like the Constitutional Court, have come into their own.

Political power has eluded the left at the federal level, though it continues to hold the all-important Bogotá mayoralty. The Green Party made a valiant attempt in the last two elections, but has not found sufficient traction. The Liberal Party is now solidly behind Santos, who distanced himself from his former mentor, Uribe, to form the National Unity Coalition. He seeks to occupy the middle ground in a country on the horns of an ideological dilemma. This election was, in many ways, a watershed occasion in Colombia’s political evolution.

Colombia’s growing global economic relevance is evident, as is its international orientation. It is a candidate for membership of the OECD, seeks to join APEC and the U.S.-sponsored Trans Pacific Partnership. The United States is a major partner, politically and economically. In the region, Colombia is in a tight commercial embrace with market-friendly Mexico, Chile, and Peru through the Pacific Alliance. Santos has maintained a polite, rather correct stance towards a sometimes fractious Venezuela and has reached out to Ecuador, Brazil, and others, not always in harmony with Colombia’s trade priorities.

As Colombian politics seeks the middle ground, its economic priorities should reveal greater versatility and recognition of the emerging global economic reality. This will call for greater prioritization of its economic relations with Asia, especially China and India. Though strongly affected by China’s financial and economic clout, Colombia’s relations with Asia have balanced the emerging giant’s presence through involvement with Japan, Korea, and increasingly with India.

Colombia was instrumental in conferring observer status on India within the Pacific Alliance, at the summit in Cartagena in February 2014. India has been diligently shaking off its lethargy and will commence discussions with Colombia this year on a comprehensive free trade agreement. In 2013, bilateral trade crossed the five billion dollar figure. Colombia was India’s third largest trading partner in Latin America, after Brazil and Mexico. Venezuela’s trade with India is larger but consists almost exclusively of export of crude oil. This commodity plays an increasing role in Colombia’s relations with India, and is prospected to grow A growing number of Indian companies have set up shop in this investor-friendly country.

The choices made by Colombia should help on its path towards sustainable development and growth with equity. But the important aspect is that this is being carried forth in a diversified market with plural partners challenging the status of the United States. Its sophistication in dealing with a changing global environment will gain it recognition and the appreciation of its burgeoning Asian trade partner. As Defense Minister of Colombia, Santos visited India in 2009, and recognizes its economic and technological potential. He is expected to visit India, where a new government has taken charge in a process that is certain to reciprocate his interest.