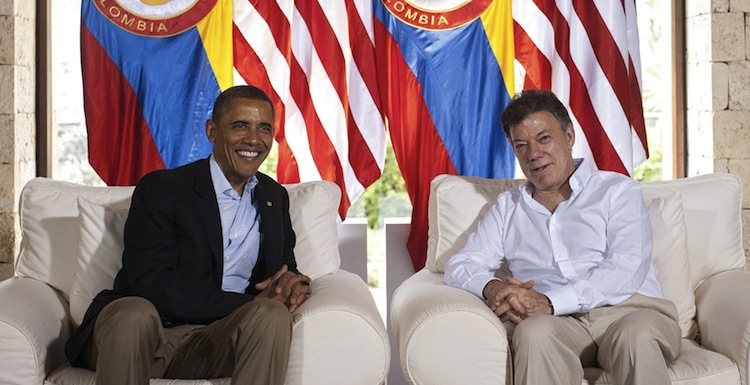 Colombian President Juan Manuel Santos arrived in the United States on Monday, December 2 for a speech at the University of Miami and then traveled to Washington D.C.  He is scheduled to meet with President Barack Obama today and give a speech at the National Press Club, along with meetings at the Inter-American Dialogue and the Center for American Progress. Santos announced that “we [Colombians] always came as beggars, to ask for resources, [but] on this occasion we meet as equals.”

The stated goal of Santos’s  meeting with President Obama is to explore the possibility of reviving an  Alliance for Progress-like program for Latin America, and to discuss issues related to “citizen security, respect for human rights, and economic prosperity.” [1] The Colombian daily Semana is also reporting that Santos will take up the matter of increased U.S. assistance in transitioning to what is hoped to be a post-conflict period for Colombia. [2] Santos, who announced on November 20 his plans to run for re-election in Colombia’s upcoming May 2014 elections, has had his tenure as president defined by security issues, culminating in ongoing peace talks with the FARC (Fuerzas Armadas Revolucionarias de Colombia; Armed Revolutionary Forces of Colombia), which began in November 2012 and have yet to be concluded. While Santos’s dedication to advancing the peace process is admirable, he must take further action towards protecting labor leaders and punishing white-collar criminals if he wants to move Colombia towards greater stability, growth, and good governance.

The FARC still fields some 8,000 guerrilla fighters within the country. [3] Since August 2012, Santos has advanced a settlement agenda which includes discussions on agrarian reform, future political participation by rebels, and reparation for victims of the conflict. [4] Santos has now appointed María Paulina Riveros and Nigeria Rentería to his negotiating team. This change, which has been applauded by international women’s groups, should help bring issues of gender to the fore in the negotiations. [5] Additionally, Rentería is Afro-Colombian, and her presence could put in place added emphasis on issues of race in these important talks. [6]

To date, the negotiations have not proceeded at the pace Santos had wished for, leaving doubt as to whether this 50-year-old conflict can finally be ended before the 2014 elections. While the deadline for concluding the talks was November of this year, at this point the only issue that has been settled is that of political participation, although some progress has been made on the matter of land reform. The two sides are still at work on the remaining points, now turning to the drug trade, an issue on which the FARC have taken a pro-reform stance.

Any resolution of the process is being further thrown into uncertainty by the upcoming elections on May 20, 2014. The main opposition figure, Oscar Ivan Zuluaga, has expressed categorical opposition to peace talks, and would almost certainly cut them off if elected. And, while polls place Santos as the front-runner in elections, with projections that he would win in a runoff,  his lead, with 27 percent to Zuluaga’s 15 percent, could hardly be called commanding. [7]

Most frustrating is the fact that any deal reached by Santos would not actually be binding for all of the FARC. As Colombia’s RCN La Radio reported, some of the FARC’s separate factions have indicated that they will not abide by any peace agreement. While both Santos and the FARC negotiators in Havana have dismissed these reports, any indication that the armed group’s negotiators do not speak for the entire group could be disastrous to the peace talks. [8] As COHA analysts have argued in the past, while a peace deal could be achieved between the Colombian government and the Secretariat (the FARC’s leadership committee), it is difficult to believe that all of the FARC’s fighting forces will agree to demobilize.

Furthermore, while Santos has pushed through talks with the FARC, his record on citizen security in the country is mixed at best, especially when it comes to protecting those opposing natural resource extraction. Santos’s administration has been unable to put a stop to the murders of union activists and social movement organizers in the country, which totaled more than 3,000 since 1977 and 791 since 2002, 30 of which occurred in 2011, Santos’s first full year in office. [9] On November 2, anti-gold mining activist Pedro César García Moreno was murdered in his home, the latest in a long string of crimes which the Colombian government is apparently powerless to halt. [10]

Santos must also take steps to reform the country’s oversight mechanisms, mainly the Financial Superintendence, in order to avoid a repeat of 2012’s Interbolsa scandal, in which the giant firm, through risky business practices, found itself defaulting on loans from Spanish banking group BBVA. The fall of this company, which at its height controlled 27 percent of Colombia’s stock market, revealed serious flaws in the country’s regulatory institutions. [11] Financial Superintendent Gerardo Alfredo Hernández was fired on November 28, but Santos must take further steps to protect the Colombian economy from future financial misadventures such as the Interbolsa affair.

This may be the last time that Santos meets with President Obama before the 2014 elections, and the Colombian head of state, with a mere 33 percent approval rating as of November 1, could certainly use some public relations victories abroad in order to improve his image at home. [12] For Santos to cement his reelection chances he must drive through a successful conclusion to the negotiations with the FARC, address and put an end to the rampant violence against labor and environmental organizers, and ensure that these giant financial corporations are following the law.

[1]  “Statement by the Press Secretary on the Visit of President Juan Manuel Santos of Colombia.” White House Office of the Press Secretary. October 31, 2013. Accessed December 2, 2013. http://www.whitehouse.gov/the-press-office/2013/10/31/statement-press-secretary-visit-president-juan-manuel-santos-colombia