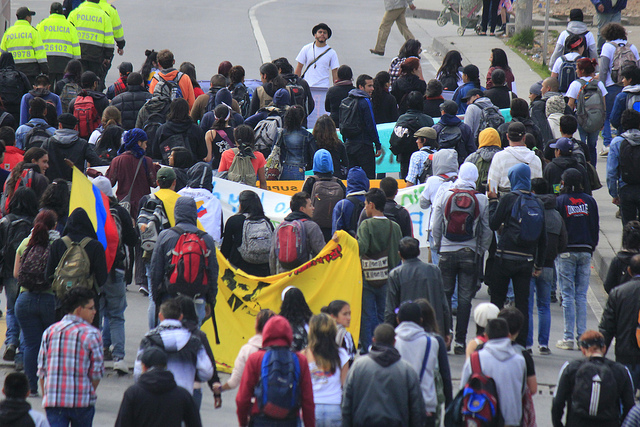 This News Analysis comes as an update concerning Renewed Social Outcry in Colombia: La Minga, the Struggle of the Marginalized, COHA’s News Analysis Published on June 10, 2016.

On June 12, the government and the leaders of the Minga movement agreed upon a suspension of the ongoing strike and the continuation of negotiations on June 17.[1] In the initial agreement, which was signed by the Minister of Internal Affairs, representatives of the Defensoría del Pueblo (the Office of the Ombudsman, an institution of the government responsible for the protection of human rights), a representative of the United Nations High Commissioner for Human Rights (UNHCHR), and members of the Sub-commission on Human Rights of the Cumbre Agraria, Campesina, Étnica y Popular (Agrarian, Peasant, Ethnic and Popular Summit, or AS), the government vowed to put an end to police repression and guarantee the demonstrators’ right to protest.[2] According to government sources, the negotiations encompassed a broad range of issues — “peace, individual protection, indigenous people and afro-descendent communities, the environment, peasants, rural-urban relations, among others.”[3] The promises made could constitute a far-reaching advance in the Minga’s social struggle for recognition and inclusion – provided that they are actually implemented. Meaningfully, on June 8 the Colombian Constitutional Court (CCC) ruled against the Áreas Estratégicas Mineras (Strategic Mining Areas, or SMAs), considering it an infringement on environmental and social rights.[4] Both the negotiations between the government and traditionally marginalized communities, as well as the CCC’s decision, are remarkable developments in Colombia’s ongoing social struggle.

An Encouraging Halt to Police Violence Granted Under International Pressure

The June 12 agreement represents an important step towards decriminalization of the movement and a commitment from the government to end repression in the country.[5] An encouraging turn in the government’s response to social demands was palpable in a declaration by the Internal Affairs Minister: “The effort that can be done along peasant and indigenous communities will allow us to guarantee a stable and lasting peace, and to end inequality. There still remains a lot to be done. We want to advance in a committed manner, that is also serious and responsible, with agreements that can be attained.”[6] The scale of the movement and the growing number of casualties resulting from the demonstrations have contributed to placing the government under intense international scrutiny. Between 30,000 (according to the Colombian Office of the Ombudsman) and 100,000 individuals (according to Marcha Patriotica, a leftist organization that supports the Minga) have taken part in protests in 18 out of the 32 territorial departments of the country.[7] After two weeks of protests and blockades faced with harsh anti-riot police repression, the concerning human rights situation eventually gained international media coverage – particularly after the Inter American Commission on Human Rights (IACHR) had been solicited to investigate the government’s violent response to the social movement by the AS.[8] On June 8, UNHCR issued a firm statement, expressing its concerns regarding “the stigmatization of participants in the protests.”[9] The UNHCR asserted that, “sustainable peace based on the respect of human rights urgently requires political dialogue in order to reach agreements, avoid confrontation and guarantee the rights and life of all.”[10] In addition, the UNHCR is among the signatories of the June 12 agreement. It will monitor the agreement’s implementation through the redaction of a “protocol for social protests,” with the participation of both the AS and the government.[11]

Negotiations to Resume as Mistrust Persists

The June 12 agreement seems to be a truce rather than a resolution of the ongoing social conflict. As the accords with the government have remained vague on how they plan to concretely implement the numerous promises granted, all eyes will be on the negotiations scheduled to be held on June 17 in Bogota. Minga leaders will not only sit down with the Ministers of Internal Affairs and Agriculture, but also with those of the Environment, Housing, City and Territory, and representatives of the Departamento Nacional de Planeación (National Planning Department), a consultative entity of the executive branch, focused on the design and orientation of economic, social and environmental development policies.[12] Admittedly, the June 12 agreement seems to have launched significant dynamics: according to Professor Cesar Rodriguez, Executive Director of the Center for Law, Justice, and Society (Dejusticia), “Projects that had already begun have been suspended indefinitely until prior consent from communities is achieved, as well as compliance with a new set of rules for approval currently being drafted by the Ministry of the Interior.”[13] However, Minga leaders remain concerned that the new standards for consultation are being drafted without input from local communities.[14] Previous instances of broken promises contribute to a lack of trust between the negotiating parties. Marleny Serna of the AS declared to Colombia Reports on June 13 that mobilization will resume within two weeks if the government once again falls short in keeping its promises.[15]

The Favorable Context of a Landmark Court Ruling

Alongside the negotiations between the government and the communities, on June 8 the CCC revoked the SMAs, citing their stern conflict with social and environmental premises.[16] SMAs were a key element in President Juan Manuel Santos’ economic development scheme: such a milestone certainly builds a favorable legal framework for the demands of the Minga movement. The ruling came as the result of a lawsuit presented by the Bogota-based NGO Tierra Digna (Centro de Estudio para la Justicia Social – Tierra Digna, or Investigation Center for Social Justice – Worthy Earth). The SMA labelled as mining zones the Amazonas, along with the areas of Vaupés, Guainía, Vichada and the biogeographic Chocó – natural zones immensely rich in biodiversity, as well as in hydrological and natural resources. The ruling constitutes a significant act of social jurisprudence, because it argues that mining exploitation represents a violation of the communities’ rights to a “previous, open and free consultation.”[17] In the same declaration, the Court’s ruling determined the need to work together with territorial entities in the formulation of strategies for environmental protection, and for the economic development of their communities.[18]

Since 2013, the Minga movement, made up by an array of indigenous, peasant, Afro-Colombian and rural voices, has been growing and asserting itself in the Colombian political and socio-economic realm as a stakeholder deserving to be taken into account. The 2016 movement is better coordinated than it was in the past and has been joined by other national sectors (such as the transportation workers, who have not lifted their blockades after June 12).[19] It also garnered strong support from other grassroots movements (movimientos sociales) throughout the continent. In addition, the environmental concerns and claims for inclusion expressed by Minga participants found echo in the CCC’s landmark ruling. Such conjunction of the social and judicial forces will shape the political dialogue and contribute to the advances in the negotiations with the government, which have long been deadlocked. It remains to be seen to what extent the government will be willing and able to comply with the promises signed on June 12. The Santos administration is under considerable pressure in its endeavour to find consensus between its development policies and the Minga movement’s demands, while reaching a peace agreement with traditionally marginalized turned-to-arms factions. Many participants of the rural struggle in Colombia see the current situation as an indicator of what the government’s approach will be when handling issues of social dissention, particularly over land, in the upcoming post-conflict scenario being negotiated at the Havana peace talks.[20]

By Juan Sebastian Chavarro and Emma Tyrou, Research Associates at the Council on Hemispheric Affairs.