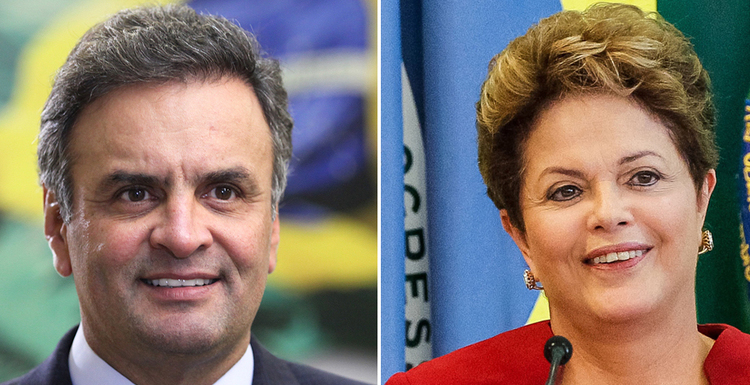 In a somewhat surprising turn of events, left-leaning president Dilma Rousseff of the Workers’ Party (PT), will face conservative, pro-business candidate Aécio Neves from the Brazilian Social Democracy Party (PSDB) in the October 26 runoff for the Brazilian presidency. Rousseff earned 41.59 percent in the hard-fought electoral battle and Neves earned 33.55 percent, while Marina Silva (PSB) only pulled in 21.32 percent in Brazil’s October 5 election.[1] Brazilian polls have forecasted that Silva and Rousseff would end up being the ones participating in the runoff; however, pollsters and commentators had earlier missed the mark as voters opted for the candidates of the two traditional parties. Clearly, Brazil today is a politically mixed bag, heavily divided between conservatives in the south/southeast and liberals in the north/northeast.[2]

Though Silva increased her profile after replacing late Eduardo Campos, both from the Socialist Party (PSD), a combination of Rousseff’s smear campaign and Silva’s flip-flopping clearly bolstered Neves’ bid for victory.  After conceding her defeat, Silva announced her support for Neves so long as he adopts her environmental and education policies. Additionally, she demands Neves to join her in a consensus regarding her goals to end presidential reelections.[3] While it is generally assumed that Silva’s followers will back Neves in overriding numbers, it is unclear whether this will guarantee a victory for him. Mathematically speaking, it could. However, it is important to wait for complete election results to be tallied and avoid hypothesizing based on sometimes unreliable polls.[4]

If Silva is able to transfer large blocs of support to Neves, this will make Rousseff’s troubled bid for reelection more challenging. As a politically divided country, Brazil stands as another obstacle to Rousseff and the PT party. Although rumors of an end to the bipolar system have been proven false, the traditional political arena is arranged again between left (PT) and right (PSDB). [5]

Right-wing voters vehemently believe that PSDB will enhance Brazil’s economy, attract foreign investment, and boost Brazilian stocks. The PSDB and its supporters often interpret welfare programs as incentives for the poor to remain unemployed and live off the subsidies provided by the government. The PSDB now appears to present a suitable program for the impoverished, but it has also highly criticized successful welfare programs like Bolsa Família, implemented by their PT opponents.  The right-wing PSDB serves the wealthy, including businessmen and corporations. Moreover, it should come as no surprise that the Brazilian media have overwhelmingly portrayed the PSDB in a favorable light, rather than objectively.[6] The overall message that the PSDB seem to have effectively communicated to the Brazilian masses is that they will enable more Brazilians to believe in the possibility of entering the middle class.

The middle class, which has expanded under the 12 years of PT administration (under Rousseff and former President Luiz Inácio “Lula” da Silva), and the economically disadvantaged are striving to elect the candidate that they believe will represent their interests. [7] Though PT is popular among the masses, it is not perfect. For instance, former President Lula had a lax reaction toward corruption when he could have shown less tolerance. Lula’s attitude has been somewhat adopted by his successor. Now, Rousseff’s major challenge is to prove to Brazilians that the corruption accusations are not true. In the next few weeks, Rousseff must convince Silva’s supporters to entrust the country in her hands for another term.

Not only are Neves and Rousseff battling over Silva’s supporters, they are also vying for those who voted for smaller political parties. The smaller parties that lost the election are expected to forge alliances with either PT or PSDB. In the Brazilian electoral system, presidential candidates from small parties often expect to lose the election and instead try to earn as many votes as possible as a means to later negotiate their support for more prominent candidates. However, it is possible for small parties to rise as the PT did under Lula, who started small, running in the 1989 election.[8] By doing that, these small parties have the power to impact the runoff and play a larger role in the next presidential race. The results on October 26 will demonstrate either an overwhelming desire for what some call a “political change”, or recharge hope for a party that has enabled much of Brazil’s growth to negotiate its way to a global prominence.