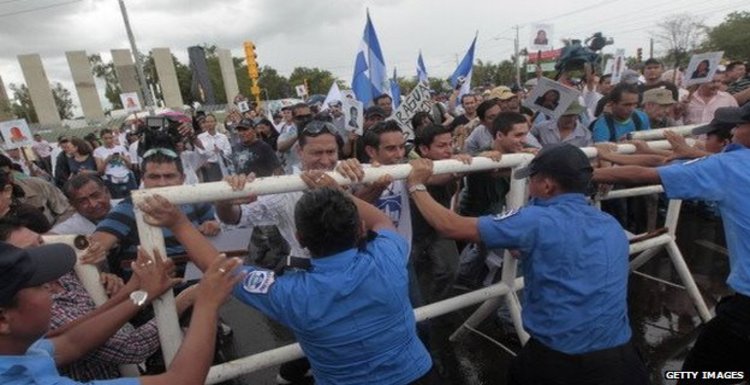 By William Rurode, Research Associate at the Council on Hemispheric Affairs

On December 22, Nicaragua will begin construction on a $50 billion USD canal that once in operation will open a new link between the Atlantic (via the Caribbean Sea) and the Pacific oceans. However, domestic opponents from all political parties and social classes are gathering to oppose this ambitious undertaking. At the core of their concerns is the fact that the canal project will lead to the forcible removal of almost 300 communities in protected indigenous zones. The project is the brainchild of President Daniel Ortega of the ruling Frente Sandinista de Liberación Nacional (FSLN, Sandinista National Liberation Front). Ortega and the FSLN led the revolution throughout the 1900’s that overthrew the often cruel and pervasively harsh Nicaraguan Somoza dictatorship in 1979, replacing it with a government that championed the interests of the nation’s poor. But now it appears that Ortega is ready to brush aside the interests of some 30,000 Nicaraguans who would lose their homes and their communities as the canal project presses forward.

The canal will be a massive undertaking, running more than 172 miles from Venado Island in the Caribbean Sea to the Pacific port town of Brito. The route makes use of Lake Nicaragua, Central America’s largest lake, but elsewhere would cut a path up to 1,700 feet wide and 90 feet deep.[1] President Ortega is the canal’s largest advocate, he claims that the project will, “create 250,000 jobs, lift Nicaragua out of poverty and make it the maritime capital of the world.”[2] Ortega has taken his nation into an agreement with the Hong Kong-based HK Nicaragua Canal Development Investment Company, which would oversee all aspects of construction. There is undeniable promise with the project, as Nicaragua is a logical, geographical route and today, is the safest country in Central America. If and when the canal is completed, it would secure Ortega’s legacy, placing him in the history books as the leader of Nicaragua that finally gave the country an interoceanic canal.

Nicaraguans have dreamed of a canal for several centuries; the current proposal is the 72nd in 450 years.[3] In the 1500’s, conquistadors from Spain were the first to formally investigate the possibility of building a canal through Nicaragua. Their lack of an effective technology, engineering expertise, and a range of financial hurdles made it impossible for them to build the canal. The United States first showed interest in a canal in the 1820s, but the idea was not taken seriously until the California Gold Rush of 1848 and 1849 when thousands of people on the Eastern Coast of the U.S. flocked to San Francisco and the West Coast in hopes of finding riches. At the time, there were no trans-continental railroads, and those who wanted to move west had to travel via steamboat to the Central American isthmus, travel overland and board another boat to get to California. U.S. steel and railroad tycoon Cornelius Vanderbilt traveled to Nicaragua multiple times to scout and plan routes for a canal, and in 1849 he was granted exclusive rights to construct a canal in 12 years.

Unfortunately, no bankers were willing to fund the project. As the project languished, William Walker, an American soldier of fortune, complicated the situation more in the mid-1850s when he brought a band of mercenaries into the nation and staged a coup. Walker briefly seized the country, and by the time he was captured and executed by combined Central American forces, the American Civil War had broken out; with this the U.S. had lost its interest in the canal. After the war, the U.S. transcontinental railroad reduced the need for building a canal through Nicaragua. Still, U.S. interest picked up again at the close of the century after the French effort to build a sea level canal through Panamá was defeated by yellow fever and falciparum malaria. French national, Philippe Bunau Varilla, who owned what remained of the French assets in Panamá, convinced several U.S. senators that the 40 plus volcanoes in Nicaragua made the nation too risky a place to build a canal.[4] The U.S. then chose to throw their backing behind Panamá, and after the canal opened there in 1914. Nicaragua would have to wait.

In June 2013 President Ortega and the FSLN-controlled legislature approved a canal building accord with Chinese investor and telecommunications magnate Wang Jing. As part of the deal, Ortega handed Wang and his conglomerate a 100-year concession to build and manage the waterway. Wang has reportedly gathered a coterie of private investors; Wang maintains that the Beijing government is not behind the project. Even if the canal is never finished, the terms of the project alone gives China an important presence in Central America. Chinese trade with Latin America as a whole has skyrocketed in the last decade, in 2000 totaling $12 billion USD but rising to $250 billion USD by 2012. Total foreign direct investment (FDI) flowing into Latin America from China reached $87.8 billion USD in 2012, approaching half of total FDI in the region.[5] Between the increasing investment from China and the steady decrease in the overall level of U.S.-Latin American trade, China seems poised to become the predominate trading partner with Latin America.[6] China is also extremely interested in natural resources, buying oil from Venezuela, copper from Perú and Chile, and vast quantities of Brazilian iron ore. A Nicaraguan Canal would only help this trade. Super tankers – vessels that can carry over two million gallons of oil – that are too large to travel through the Panama Canal, even after the current expansion, would be able to slide through the planned Nicaraguan passage.

It is hard not to wonder if Beijing, and not enigmatic Wang, is floating the bill for this project. A recent investigation by Confidencial, a Nicaraguan online newspaper, suggested that a complex web of fifteen companies from all over the world were involved in funding, with one in Nicaragua, five in the Cayman Islands, seven in the Netherlands, one in China and one in Hong Kong. For his part Wang has steadfastly denied any connections to the Chinese government, military or ruling Communist Party.[7]

Canal opponent, Nicaraguan Congressman Eliseo Nuñez, has been outspoken in his denunciation about the project. It is, he said, “a propaganda game, a media show to continue generating false hopes of future prosperity among Nicaraguans.”[8] Critics have lashed out at President Ortega, arguing that the project is simply a new way for those high up in the administration to further enrich themselves. The proposed canal has provoked a good deal of opposition on both sides of the political spectrum. A small, left-wing splinter group of the FSLN, the Movimiento Renovacion Sandinista (MRS, Sandinista Renovation Movement) is up in arms over the canal. An article published on the party’s website on June 6 outlined three major concerns regarded the concession granted to Wang:

The MRS’s main concern is with those communities scheduled to be displaced by the construction of the canal, accusing Ortega of “robbing the Nicaraguan towns of their right to decide on the construction of an interoceanic canal.” The president was a “vendepatria,” (traitor or sell-out), the MRS concluded.[12]

The leading opposition party, Partido Liberal Independiente (PLI, Independent Liberal Party) holds an exceptional distrust of the Ortega administration. Carlos Langrand, Assembly Deputy and member of the Infrastructural Commission of the National Assembly, raised questions about the constitutionality of the concession, saying that because “the canal is important to the country, it is necessary that the government consult the persons whose lives will be impacted by the project.”[13] Opposition politician Victor Tinoco, a former FSLN member expelled in a party purge by Ortega, argues that building the canal is against agrarian reform, which was at the centerpiece of Ortega’s Sandinista revolution. They protest that the canal that will cost almost four times as much as the entire annual GDP of Nicaragua.[14] It is too expensive, they say. The canal deal with Wang, Law 800, was approved in a record seven days with no public consultation, no feasibility or environmental studies presented and no parliamentary debate.[15] The concession agreement gives Wang carte blanche to build and manage the 172-mile long canal, as well as multiple deep-sea ports, a free trade zone, an international airport, cement and explosive factories, an electricity plant and elite hotels.[16]

Anger, however, is not restricted to the national level. Citizens have formed locally based groups and coalitions, and have taken to the streets. María Duarte, a 72-year-old former Sandinista who fought in the revolution as well as against U.S backed Contra insurgents, said at a recent protest, “it’s all over between us and Daniel. He was like a son to us but he’s betrayed us, sold us out to the Chinese! Que Barbaridad! It’s outrageous.”[17] Protestor José Jesus Ramirez agreed, adding that he might be willing to use weapons and violence against those in support of the canal. Ramirez stood ready to begin “begging the international community to send its arms to defend ourselves, like before.”[18] Some citizens have started mockingly calling their country “Chinaragua.”[19]

Opposition leaders are also wary of corruption in this most massive of undertakings. The matter of corruption has been a persistent problem for Managua for decades and a report released in early November by Transparency International, a global anti-corruption watchdog, listed Nicaragua as the third most corrupt country in Latin America, falling behind Venezuela and Haiti[20]. Another study, “Diagnosis of Corruption in Nicaragua” carried out by the Joint Donor Anti-Corruption Trust Fund, revealed that one in four interviewees said they had been given bribes to expedite public and private red tape, and that three out of ten citizens said they had been asked for kickbacks at public institutions between 2006 and 2009. Miguel Peñailillo, the Chilean researcher who led the project simply claimed, “corruption has not disappeared, but has simply changed form.”[21] With corruption as widespread and endemic as it is, the question of whether or not the Nicaraguan government accepted bribes in order to build the canal must be answered and a clear, concise report detailing the financial backing of the project ought to be released to the public.

While Francisco Telemaco Talavera, the leader of Nicaragua’s national Agrarian University and a strong advocate for the canal, says the project will lift 400,000 out of poverty and create 250,000 jobs, the environmental impact will be massive.[22] National Geographic experts who have studied the proposal estimate that the canal would transform environmentally sensitive wetlands into denuded dry zones, remove hardwood forests, and destroy habitants of vulnerable animals.[23] Lake Nicaragua is the largest drinking-water reservoir in Central America and could face numerous environmental catastrophes such as oil spills and dirty salt water infecting pristine biological ecosystems. In addition, the proposed canal would cut through two UNESCO biosphere reserves that are home to jaguars, sea turtles, great green macaws and other endangered species.[24] Experts claim that the canal could destroy up to 400,000 hectares of rain forest and wetlands.[25]

In order for the canal route to reach the desired 90 feet depth, millions of tons of dynamite will be used to carve a path through the lake. The use of dynamite is an incredible risk that could easily destroy large areas of protected land and species in the lake and on Ometepe, the island home of many protected species of monkeys and other wildlife.

President Ortega would be well advised to slow down and listen to the alarms being sounded. Some Nicaraguans, like canal opponent Lombardo Fonseca, are calling on the people to militantly resist the project. Already armed and taking to the mountains, Fonseca said, “Together, we will do everything humanly possible to stop this canal.”[26] In light of the legitimate constituent concerns about building the canal, perhaps it would be best for the government to take more time to deliberate in a more inclusive manner and address the clearly justifiable objections.