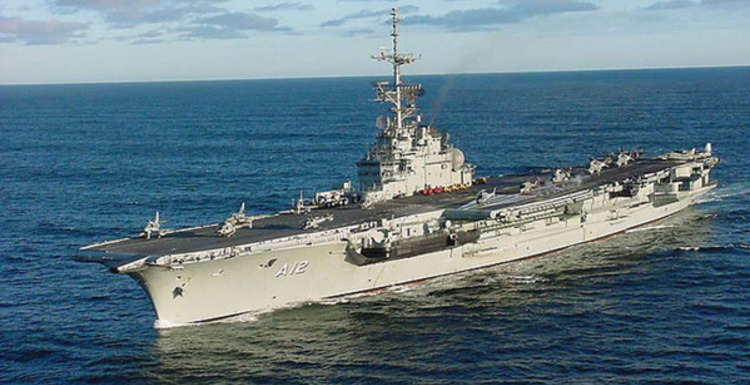 An obscure fact of Latin American military affairs is that the Brazilian Navy possesses its own aircraft carrier. The vessel, now five decades old, is currently undergoing repairs so that it can serve for at least a decade more. Nevertheless, given the fast pace of South American geopolitics and geosecurity affairs, serious questions should be raised whether or not Brazil actually needs a carrier in its fleet.

Brazil acquired its carrier from France in November 2000: the vessel is a non-nuclear, 36,000 ton, Clemenceau-type carrier, which was constructed in the early 1960s.The carrier, originally known as the Foch while it flew the French flag, “entered the dry-dock stage in Saint-Nazaire in 1957 and was launched three years later. It was towed to the Brest arsenal for completion. It entered active service in 1963 and ceased to be armed by the French Navy in 2000, when the Charles de Gaulle CVN came into service.” [1]

When it was sold to Brazil, the Foch was renamed as Sao Paulo. It is worth noting that the Sao Paulo replaced Brazil’s other carrier, the Minas Gerais, which was launched by England during World War II (then known as the HMS Vengeance). The Minas Gerais served for 41 years in the Brazilian Navy starting in 1960 until it was decommissioned in 2001. [2]

The website MilitaryFactory.com provides some additional details about the Sao Paulo, explaining that it “showcases a typical Western aircraft profile with a flat, unobstructed flight deck and starboard, …  her deck allows for the launching of two fixed-wing aircraft simultaneously.” [3] The massive vessel has an overall length of 869 feet and is able to make headway at a top speed of 32 knots. According to details that have been released, the carrier has a crew of over 1,900 sailors. [4] As for the aircraft that it transports, a December 2013 press release by the French shipbuilder DCNS, which is currently upgrading the Sao Paulo, says that the Brazilian warship has 18 Douglas A-4 Sky Hawk warplanes. [5] Meanwhile, a December 2012 note in Brazilian news agency R7 explains that the carrier also has Super Puma transport helicopters and Esquilo light helicopters. [6] Tragically, the Sao Paulo has not served in the Brazilian Navy without incidents, as on-board fires in 2005 and 2012 killed and injured a number of sailors. [7]

The Sao Paulo is the only carrier currently in use by a Latin American Navy. Nevertheless, COHA has been unable to unearth information on the types of operations this carrier has been involved in during the decade that it has been flying the Brazilian flag.  An analysis in the website WarisBoring.com explains that the Sao Paulo has participated in naval exercises, such as sailing with a U.S. carrier, the USS Ronald Reagan. [8] Additionally Argentine warplanes have occasionally landed on the Brazilian carrier, which serves as a confidence-building initiative between the naval forces of the two neighboring states. [9]

It would appear that the Brazilian Navy has plans for the aging Sao Paulo. In early January 2014, the Spanish news agency Infodefensa.com reported that the French shipbuilding company DCNS had been asked by the Brazilian Navy to inspect the Sao Paulo’s forward catapult. The repairs to the Sao Paulo began in November 2013 at a naval base in Rio de Janeiro. [10]

Regarding the rehabilitation of the Brazilian warship, a December 2013 press release by DCNS explains that “the steam catapult, which already performed over 5000 launches, is a key element for the aircraft carrier capability.” [11] The French company has praised itself for its work on modernizing the Sao Paulo as it also reported that “after the team’s intervention, the catapult was dry-fired twice, demonstrating the expected performance. The Brazilian authorities expressed satisfaction.” [12]

Thanks to its strong economy over the past decade, the Brazilian armed forces are carrying out important arms purchases which will help the Portuguese-speaking giant consolidate itself as Latin America’s foremost military power.

Throughout the past decades, COHA has written several comprehensive reports on Brazil’s military and its arms acquisitions – we will enumerate just a few of the more prominent examples here. Apart from the Sao Paulo’s upgrades, the Brazilian Navy is constructing a nuclear-powered submarine, with French aid. The submarine has been a dream of the Navy since the country’s 1964-1985 military regime. [13] Paris is also helping Brazil to build four diesel-electric submarines, variants of the French Scorpene design. [14]

Meanwhile, the Brazilian Air Force is getting a revamp as Brasilia has already selected, after several years of negotiations, the Gripen (produced by the Swedish company Saab) as its new warplane. For years, analysts such as those posted at COHA believed that the Brazilian government would choose the Rafale warplane produced by the Swedish Dassault. But in December 2013 Brasilia ultimately chose the Swedish model. [15] Brazil will purchase 36 Gripen warplanes in a deal reported to be worth around $4.5 billion USD. As for the Brazilian Army, it has purchased Shorad missiles to upgrade its arsenal. The missiles will be used to protect the skies of the cities that will host the upcoming 2014 FIFA World Cup. [16]

It is worth noting that defense-related foreign dignitaries regularly travel to Brazil to lobby the Dilma Rousseff government in an effort to persuade it to buy more weaponry. For example, the Russian Defense Minister Sergei Shoigu travelled to Brasilia in October 2013 to discuss the sales of the Pantsir-S1 and Igla missile system, a deal which if agreed upon in the coming months, could be worth up to $1 billion. [17] Meanwhile, French President Francois Hollande visited Brazil this past December 2013 to convince the Brazilian government to purchase the Dassault warplanes – an unsuccessful visit as Brasilia chose the Swedish Gripen.

This is not to say that other nations in the Western Hemisphere have not also acquired new military equipment over the past decade. For example, the Venezuelan military has also spent billions of dollars to upgrade its own military, mostly by turning to Russia as a major weapons supplier. [18] Nevertheless, as the Russian media even admits, Russia-Venezuela military relations in the post-Hugo Chávez have not been particularly ideal for business. An October 2013 commentary in the Russian news agency Pravda explains, “All major contracts were tied to late president Hugo Chávez . After his death, against the backdrop of complications of the socio-economic situation in the country, defense cooperation with Russia actually came to a standstill … new Venezuelan President Nicolas Maduro is not ready to agree on new [contracts].” [19]

The aforementioned article by MilitaryFactory.com concludes, “the Sao Paulo remains a critical cog to Brazilian Navy operations in the region, both for stability and in power across Atlantic-facing South American and Latin American waters. For any modern naval power, the aircraft carrier is the heart and soul of the fleet.” [20]

But does Brazil actually need a carrier? Certainly such a vessel is an example of a naval power as it helps Brazil’s Navy increase its power projection or powers. Rising global powers such as China acquire carriers in order to assert themselves as global naval powers. [21] On the other hand, other nations that already possess these gigantic warships are suffering from an economic crunch and are re-organizing their armed forces. An example of this is the British military, which plans to eliminate some 20 thousand military personnel across the three branches over the next years, including 6,000 sailors. [22] The British Navy is developing two new carriers, the HMS Queen Elizabeth and the HMS Prince of Wales, but they have stirred controversy because of high costs and the reduction of naval personnel.

As for Brazil, the country is largely devoid of any major security threats that would make a compelling case for its Navy to have a carrier (or plan for a new one within the coming decade). Relations between Brazil and Venezuela during the Hugo Chávez presidency were rarely troubling and commerce was a strong confidence building mechanism to prevent tensions from escalating. [23] Furthermore, in late 2013, there was a major air force exercise in northern Brazil in which several Western Hemisphere air forces participated, including the U.S. and Venezuela. [24]

Moreover, it would be bizarre to believe that a carrier is needed for protection against some of Brazil’s smaller neighbors like Guyana, Suriname or Uruguay. Likewise, relations with Peru and Colombia are generally cordial, with this being reflected in the inter-agency cooperation against transnational criminal activity like drug trafficking. [25] Furthermore, while Argentina was once a serious contender to Brazil’s military role in Latin America, today the Argentine armed forces is a fragment of what it once was. (We do not count Bolivia and Paraguay in this analysis since, even though both nations border Brazil, neither possesses sea access).

One argument for a naval build up could be that the carrier and nuclear-powered submarine will help safeguard Brazil’s coast, specially its off-shore oil platforms. The government has sold oil blocs to international oil companies, a move that Brazilian oil workers protested against in 2013. [26] It should be noted that also in 2013 the Brazilian Navy has also acquired three Offshore Patrol Vessels (OPV) for protecting its ports and oil platforms from the British manufacturing giant BAE Systems. [27] Certainly, an argument can be made that the Brazilian Navy needs even more vessels to protect its coastal and off-shore installations; but which country or criminal network will want to attack them is far from clear.

As a final point, it is true that a carrier helps a nation’s naval stature, but the vessel also needs to take part in some kind of naval maneuver in order to showcase that it is operational and helpful. Military exercises with other navies are a good example of this. But one could wonder if the Sao Paulo, once it is operational again and before it is retired, could end up being used as a support vessel for some multinational security operation, either as part of the United Nations or some international coalition combating piracy off the coast of Somalia.

Reporting on the Gripen warplane deal this past December 19, 2013 the defense news website Defense Industry Daily explained that the Brazilian Navy “intends to buy 24 fighters of its own, to operate from the carrier that replaces Nae Sao Paulo beginning in 2025.” [28] Both an April 29, 2013 article in Defense Industry Daily as well as an April 2013 article a Brazilian website called Defesa Aerea & Naval also mention rumors that a new aircraft carrier currently being developed by the aforementioned DCNS (the project is called PA 2) may be sold to Brazil as France is no longer interested in acquiring it. [29]

It is likely that the Sao Paulo will retire within the next decade. This is logical since the vessel is already over 50 years old and it may prove to be more costly to constantly upgrade and repair it instead of buying a new one. Whether Brazil actually needs a carrier, be it the Sao Paulo or a new one ten years from now, remains a highly debatable issue. A case can be made that the carrier can help protect Brazil’s extensive maritime interests, but it is doubtful that the country will face any conceivable major security threats, i.e. a war with another nation, in the near future. Brazil’s carrier may be one of the least well known and used strategic assets in Latin American military history and in the future.