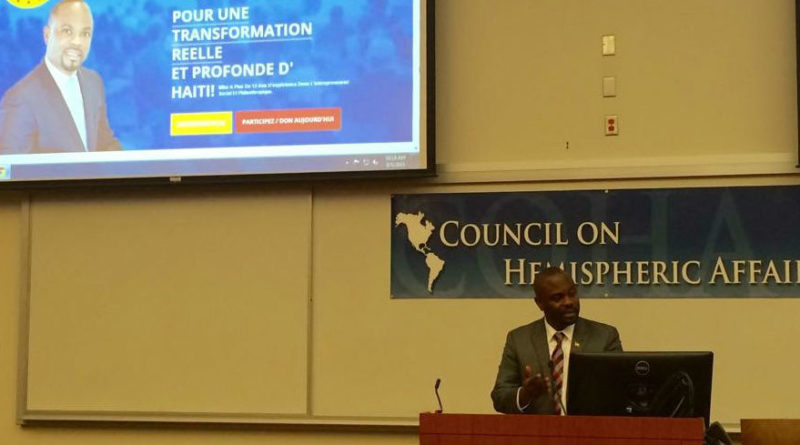 In anticipation of the upcoming presidential elections in Haiti, COHA sat down for an interview with presidential candidate Michelet Nestor, who is running under the banner of the Correch party (Coalition pour la Convention de la Reconstruction de la Reconciliation des Citoyens).

***UPDATE: On August 9, as voting for Haiti’s legislative elections was underway, Mr. Nestor was attacked by three assailants outside a polling station in the capital of Port-au-Prince. The candidate is currently in stable condition in a local hospital. The perpetrators are still at large at the time of this writing.***

The 2015 general elections in Haiti have been a topic of much speculation both within the country and among international observers. Legislative elections have been delayed multiple times due to political deadlock between President Michel Martelly and opposition members, and Haiti’s bicameral parliament was dissolved in January as a result.

Presidential elections, scheduled for October 25, have likewise sparked much debate, as controversial decisions by the country’s Provisional Electoral Council (CEP) and the sheer number of candidates (54 in total) leave doubts over logistics and ethics in this year’s race.

Presidential candidate Michelet Nestor, an entrepreneur and philanthropist currently making his political debut, highlighted the need for concrete efforts to ensure transparency in electoral proceedings. “Now, more than ever, it’s essential that we have advisors and observers in the electoral bureaus who report on all decisions, as they are happening, within the Electoral Council,” Nestor told COHA.

Indeed, domestic civil society organizations and the international community have recognized the need for external watchdogs in a country whose political institutions are prone to instability. The EU and the OAS—both of which have sent electoral observation missions to monitor election proceedings—along with Haiti’s own Citizen Observatory for Institutionalizing Democracy (OCID), have released statements deeming the August 9 legislative elections satisfactory, with OCID calling the proceedings “more or less acceptable.”[1]

Still, Nestor expressed concerns that the country’s history of political turbulence is creating an atmosphere of complacency, which, he argues, could stifle Haiti’s potential for growth. In an August 5 press conference held in conjunction with COHA, the candidate stressed that Haiti’s democracy will only strengthen if its institutions are held to rigorous standards, and that the inherent ties between political stability and economic growth should not be ignored in a country where almost 80 percent of the population lives in poverty.

Nestor has asserted that international assistance must be “earned through a transparent democratic process,” providing a concrete incentive for fortifying the country’s political infrastructure.[2] In his address during the August 5 conference, he underscored how levels of foreign investment are inextricably tied to Haiti’s “public image.” The violence that marked Sunday’s legislative elections, then, is to be understood as detrimental, not only to the foundations of the country’s democracy, but also to its potential for economic development.

Also key among the topics discussed at the press conference and in the interview with COHA was the mass deportation of residents of Haitian descent from the Dominican Republic. The issue has garnered curiously little attention from Haitian presidential candidates, which Nestor chalks up to a strategic avoidance of controversial issues and a refusal to place the defense of human rights ahead of partisan allegiances.

A vocal critic of the deportations and of President Martelly’s apparent indifference thereto, Nestor, in an open letter to Dominican President Danilo Medina, highlighted the dire implications that the plan carries for innocent residents and for bilateral relations between Santo Domingo and Port-au-Prince. He criticized the DR’s 169-14 Naturalization Law, ostensibly created to allow Dominicans of Haitian descent to certify their legal status in the country, over unrealistic criteria and countless problems in implementation. The candidate called upon Medina to devise a comprehensive path to citizenship for the affected individuals, many of whom were born in the Dominican Republic and speak no Creole.[3]

Though an advisor to the Dominican Ministry of the Presidency stated that the right to due process would be afforded to all those facing deportation and that the country would not deport anyone born on Dominican soil, Nestor remains skeptical. “I do not believe that the government of the Dominican Republic will stay true to these declarations,” he told COHA. The candidate maintains that the deportation plan constitutes a gross violation of human rights and necessitates action by the international community. For Haiti, still reeling from the 2010 earthquake that left hundreds of thousands dead and over 1 million displaced, receiving hundreds of thousands of refugees from its neighbor to the East will inevitably create chaos.

Mr. Nestor has made the topic a focal point of his campaign, attempting to mobilize the Haitian diaspora and foreign observers in opposition to the impending humanitarian crisis.

Undeterred by the violence he suffered on Sunday, Nestor confirmed that he will continue with the campaign, grounded on the platform of transfòmasyon. Indeed, he remains resolute in his drive to transform Haiti into a country with a strong democracy, a stable economy, and a demonstrable commitment to human rights.

Despite today’s disappointments, we Haitians will not be deterred in our ambitions. We will not play in to the hands of those who would leverage this news to suggest that we are not ready for change. I will continue to stand and fight for my country and its potential.