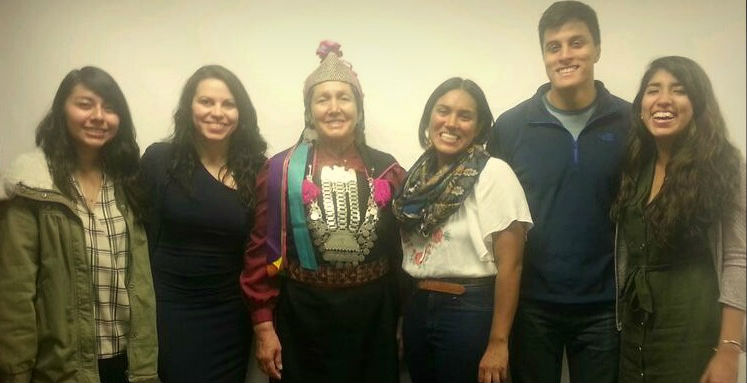 Translated into English by Evelyn Estrada and Michelle Rosas Parvool

For a PDF version of this article, click here.

On October 23, COHA had the grand honor and privilege of interviewing one of the main authorities of the Mapuche community, Lonko Juana Calfunao Paillaléf. This meeting was held during Lonko Juana’s visit to the United States, during which time she sued the Chilean government before the Organization of American States (OAS) in Washington, DC. Her objective was to bring visibility to the violent acts committed by the Chilean state. These acts include the appropriation of indigenous lands and the mistreatment of the Mapuche people, including women and children.

This testimony sheds light on her experience as an activist leader in the historical struggle against the oppression of indigenous communities in Chile, with the ultimate purpose of preserving the right to cultural heritage and sovereignty of the Mapuche nation.

Juana: It has been nearly 130 years since the [Chilean] state forcefully entered and illegally seized our lands. Since that day, we have remained under the subordination, repression, and criminalization of the Chilean state. First, they occupied our territory by practically killing us. Today, when they seize our lands, it is the transnational corporations that come from different countries around the world to make bilateral agreements with the president. But in reality, they sell our territory because it is the richest territory in the country—it has the most minerals, water supplies, natural forests, and all types of things. So, for the time being, we are the most affected—we win nothing. The only thing we gain is imprisonment because we the Mapuche are strongly opposed to the state.

Our resistance, for the most part, stems from southern Bío Bío, where my territories, including Concepción, Temuco, Osorno, and Valdivia are located, everything south of what is recognized as Chilean territory today. [The Chilean state] has implemented laws, militarization, anti-terrorist laws, and tribunals. They will always recognize that we are the only [indigenous] nation, some would say in the world, that continues to have control over its territory. We came here to sue the state for our territory, and for the amount of criminalization that we have experienced at the hands of the state itself. As an authority figure, woman, wife, grandmother, and aunt, I sue the state because there have been six generations that have practically died (including all of my family) defending Lake Colico from the construction of a road. The sole purpose of this road is to strengthen fishing, remove our native trees, and also promote tourism for all of those multimillionaire people, because both the first lady of the republic and the former president Piñera have houses by that lake. That lake originally belonged to us, but the problem is that they have taken ownership of it.

Because we defend everything, we are victim of many tremendous things, including death. I have been heavily beaten—the government has personally attacked me. One day as I was riding in a vehicle, three minutes into our trip the vehicle exploded. We had a terrible accident that almost destroyed my hand and severely injured my face.

When we are detained [by the state], we are especially victimized. The police not only sexually violate you, but they also use clubs. That is terrible. I had to come here to provide testimony about this so that people would understand why all of a sudden people claim we are brutes, that we are mentally ill for defending a ‘little plant,’ for wanting to defend a bird, or simply even a lizard. We are depicted as backwards, but that is the [bio]diversity where we live.

They are beating our children, they are killing them, they are forcefully disappearing them. Our parents cared for us, they worried about us so that we could continue fighting today, and we must do the same for our children. If they want to hit and kill children in their own culture, that is their problem, but we do not touch any child because they are like gods to us. But they have certainly hit our own children.

LB: Is there a growing, unified movement of the indigenous populations in different countries? Secondly, in Chile, has a working arrangement survived between the student movement which also was in arms against the government for underfunding social programs and the indigenous, who saw their resources being misused without their voice being heard?

Juana: The Mapuche nation has always been known for defending and fighting practically on its own, without alliance or support from any other [group]. The Mapuche nation has a thousand-year old struggle, and thanks to our fighting tactics, we have survived. Other nations are practically exterminated, and they don’t have a strong foundation like we do. To this day we can say that Chile still doesn’t have control over us.

Alliances exist, but in reality these alliances are low profile. Regardless of how strong these alliances are, we can never make them known because it is a professional alliance.We can not shed light on the types of alliances we establish. We have alliances with all of the primary nations, but on a very discreet level. Some might view it as a cultural alliance, but there is definitely a strong alliance.

COHA: Do you think more indigenous representation in the Chilean government would help achieve benefit programs for the indigenous people of Chile? Or do you think, like in the case of Bolivia, that the election of an indigenous individual like Evo Morales will not achieve change in the government? Do you think that a relation should exist between the state and the Mapuche?

Juana: I admire Evo Morales because he is indigenous, but he works for the state, and he is under state standards; so he is a very kind, very culturally aware indigenous person, everything you might like, but he obeys a boss.

We do not want to copy Evo, or Bolivia. We do not want that—that is garbage to us. We cannot be an indigenous community if we live under the subordination of the state. We, the indigenous peoples, have to resist the state, as we have for over thousands of years. I am proud to be Mapuche because my people have fought against everything, especially to maintain our socio-political way of life. We do not have a president. The Chilean state has established Law 19253 in order to enter our territory with its politics. This law will disband my people.

We can make two parallel demands today. The first one is for illegally appropriating our lands, and the second one is for the mistreatment that we have received from the state, for even forcibly disappearing us. What we currently want is to fortify our organization, nothing more. Strengthen it with what? We want a huge building there, so our parliament is present, just like the parliament of Valparaiso, just like their parliament of Santiago. With our own resources, we can also create a parliament, or they could always return a department that was built in our territory to us.

I spent four and a half years in jail. The state has accused me of everything, even for having a terrorist gaze, [though] I don’t know what a terrorist gaze looks like. They tell me, “Raise your right hand and swear by God,” and I don’t raise a hand, and they tell me, “Swear by God,” and I look back and I see no one. “We’re asking you to swear by God.” I don’t have to swear by anyone… those are your diabolic beliefs. Of course, then… I begin speaking to her in my own tongue, because all of the trials over there are in Spanish. The judge then proceeds to tell me, “Speak in a Christian manner. Don’t come to me speaking in a diabolic manner.” Those were the words of a judge of the republic, and I tell her:

“Look, you are lifting accusations against me, and you want me to translate for you? I am not the ignorant one, you are. Since Chile does not have jurisdiction over me, and since I am not Chilean, and the laws establish a civil and penal for the Chileans, and since I have never signed a document that says I am Chilean, I am leaving [this trial].”

And so today, since I chose not to speak Spanish in the tribunals, the court has decided to have translators present their during trials. One is allowed to conduct the entirety of his/her trial in Mapudungun. And so, the translator goes on translating, and they remain ignorant. We the Mapuches are knowledgeable of their politics, know their social structure, economy, know their political party system, their religion– however, they know nothing about us.

There is a small fraction of families that hold most of the power in the country. These are families that have taken complete control over our lands, and have created high levels of inequality. Because, how can it be, look, that they have their beautiful houses, big, and lovely. But all of a sudden, because they have a termite problem, they light their houses on fire. But not before ensuring their homes. Then, they claim, “The indigenous people burned our homes—I think it was that one, and also that one.” Then the police come to arrest us. And [while] one is imprisoned innocently, the other gets his new house. And that is a form of corruption that is being enforced on us, tremendously today. And it’s a tactic used to gradually imprison us all.

COHA: When did you decide it was no good to try to build a friendly relationship between the Mapuche and the Chilean state?

Juana: Look, there are three types of Mapuches, just so you know. The first type resides within the community, and is against state interference in Mapuche territory. There is the second type that is tired [of resisting the state], left for the city, and became a servant of the state. But there is the third Mapuche who is the most dangerous because he is son of a mestizo; his father or mother is not Mapuche. This type of Mapuche signs documents in the name of the Mapuche community, but this type doesn’t know the language, has never lived in the community, and knows nothing about Mapuche traditional customs. This type forms alliances with the government. It lives off the government’s crumbs, but we do not.

COHA: What defines a Mapuche individual?

Juana: We do not grant the state any permission for these types of projects in our territory. We won here, we fight against anyone, and if one of us is killed… we say, “live, or die with dignity.” It is preferable to die trying to defend our territory rather than live like a worm on the ground. We work hard to acquire all our resources. Nothing, nothing, nothing that we have was given to us by the state. It won’t give us anything anyway. We fight. The government provides for those in favor of it, not for those against.

COHA: My question is whether the Chilean government has tried to include the Mapuche people in constructive dialogues to reach a solution.

Juana: No. The state does not converse with us. It forms dialogue tables to come to agreements without our vocal input. The other day, while I was here, the government said:

“Well, we will continue making roads, despite there being people who oppose progress. So therefore, these people are practically savages [‘these’ being us], and they will all be subject to the anti-terrorist law!”

We are not the cheap labor of the state. We work our lands. We care about our things. We make our things, which is why we have great things. We work in all areas of our economy. We do not need anything from the state.

Translated into English by Evelyn Estrada and Michelle Rosas Parvool