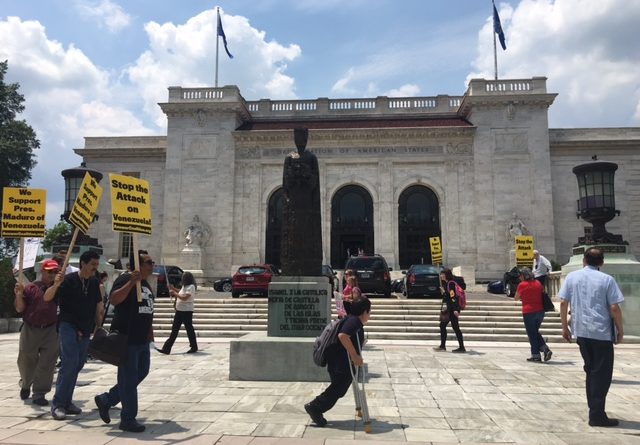 Yesterday, COHA’s Director Larry Birns handed an open letter (read here in English or Spanish) to an assistant of the Organization of American States’ Secretary-General Luis Almagro at the regional body’s Washington headquarters on behalf of scores of human rights, solidarity, and community organizations and individuals based in the United States and Canada; an action supported by nearby demonstrators expressing their opposition to Almagro’s invocation of the Democratic Charter against Venezuela. The aid promised to deliver the document to the Secretary-General directly.

The protest, which took place in the sweltering Washington summer heat, drew the participation of several U.S.-based organizations including the Boliviarian Circle of New York “Alberto Lovera,” ANSWER Coalition, Code Pink, COHA, The Latin American and Caribbean Solidarity Committee (DC), the Latin American and Caribbean Action Network (DC), and the National Network of Salvadorans in the Exterior (RENASE-DC). COHA Research Fellow Peter Bolton was interviewed by TeleSur and RT to discuss the contents of the letter and the context of the action.

This protest and the delivery of the open letter took place on the very day that member states of the OAS met at an urgent session of the OAS Permanent Council to discuss the possibility of using the Charter against Venezuela’s Chavista-led government of President Nicolás Maduro. The session, which was prompted by Almagro’s publication of a 132-page document arguing for action against the Maduro government, led to a unanimous resolution rejecting intervention and encouraging dialogue between the government and opposition-controlled National Assembly. The outcome of the meeting was widely considered an embarrassment for Almagro, who has been attempting to delegitimize the democratically elected President Maduro since last year. The large majority of the member states did not favor application of the Charter and supported dialogue and the mediation efforts of UNASUR. The ambassadors rejected Almagro’s lack of consultation, interventionism, and inappropriate invocation of the Charter. During the meeting, words of strong support for Venezuela came from natural allies of Maduro such as Bolivia, Ecuador, and Nicaragua. Ecuadorian President Rafael Correa said that Almagro’s pressure to apply the Charter was “out of line” and not based on consensus of the regional organization since other members countries were not consulted. Bolivia’s Ambassador Diego Pary echoed these remarks, adding that it was based on “interventionist” attitudes. But rejection of the move also came from more unexpected quarters. Even Argentina, which is now led by the newly elected center-right Macri administration, supported the theme of dialogue over applying the Charter. Susana Malcorra, Foreign Minister in Macri’s cabinet, said, “I firmly believe that it is important to give space and pause to the dialogue because I know of no other way to find a solution to the problem of Venezuela.” Such sentiments stand in stark contrast to the increasingly hostile posture that Almagro has taken over the last few months, aligning himself closely with the Venezuelan opposition and striking out against the Maduro administration. Indeed, the Jamaican representative admonished Almagro for his recent treatment of Venezuela. Ambassador Julia Elizabeth Hyatt said: “Jamaica considers totally unacceptable and unfortunate certain recent utterances by the Secretary-General in his response to the president of Venezuela. We call on the Secretary-General in carrying out his duly ascribed functions to adhere to respectful communications at all times.”

Rather than cede to the majority of the Council, Almagro is doubling down in his war against Venezuela, tweeting: “Hoy más que nunca urge fecha reunión Consejo OEA para abordar Carta Democrática #Vzla #DemocraciaEnVzlaYA” [Today more than ever, the date of the meeting of the OAS Council to deal with the Democratic Charter is urgent]. COHA Director Larry Birns observes: “This means we can expect another meeting of the OAS in June (the 10th or 20th), and an intense lobbying effort by the Secretary-General at a time when most member states have little appetite for foreign intervention in Venezuela on the part of their own countries. Almagro is acting unilaterally and his behavior is unbecoming of the head of an organization made up of several countries. His leadership of the OAS compares unfavorably to the anti-interventionism and respect for multilateralism of his predecessor, Jose Miguel Insulza of Chile.”

Almagro clearly has not come out of this latest meeting of the Permanent Council a humbled Secretary-General, nor does he acknowledge the multilateral dimension of the OAS when things do not go his way. Rather, he has picked up the neo-colonial sword in order to lead the charge, but there are presently few soldiers behind him at the OAS.