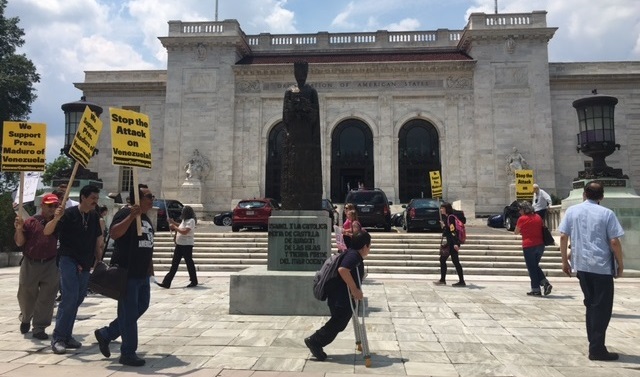 The Council on Hemispheric Affairs in Washington, DC (COHA) expresses its deep concern over the re-election of Luis Almagro as Secretary General of the Organization of American States (OAS). No outside experts are needed to explain the consequences of continuing this Uruguayan’s questionable leadership over the regional block. From inside the OAS itself, Graciela Curia, Argentina’s ambassador to the multilateral organization, shared her own concerns after the vote in the Permanent Council, “Regrettably, the OAS has been paralyzed by its polarization. This has left it bereft of a normal decision-making process, incapable of dialogue, and less and less relevant. The Organization itself has become a mere spectator to events without being able to offer effective solutions.”

As an example of the irrelevance of the OAS under Almagro’s leadership for the general public in the US, his reelection was barely covered by the US mainstream English speaking media.

Criminal double standards when it comes to Honduras

There is no doubt that Almagro’s tenure at the head of the OAS has been one of the most controversial, criticized and inconsistent with the Inter-American Democratic Charter of the past few decades. The list of irregularities is quite long. While Almagro has focused his efforts on selectively and rigorously applying the foreign policy of one OAS member state which its largest contributor, the United States, with its unilateral opposition to the progressive governments of the hemisphere (especially Venezuela), he has turned a blind eye to the serious electoral fraud, government-sponsored drug trafficking, human rights violations, and widespread corruption under the administration of Juan Orlando Hernández in Honduras.

No condemnation of the situation on the U.S. border

At the same time Almagro politicizes human rights in Venezuela and the migration of hundreds of thousands of Venezuelans due to the economic crisis there, he completely ignores the exodus of thousands of Central Americans to the U.S. border, where children continue to be separated from their parents by the U.S. system of justice and hundreds remain orphaned.

Almagro has never said anything against the United States’ illegal sanctions on Venezuela and Cuba and has never defended the majority of United Nations member states that vote repeatedly to end the U.S. blockade on Cuba. And under his leadership the OAS has never played a constructive role in the various efforts at dialogue between the Venezuelan government and its opposition over recent years, despite the fact that the Vatican and various governments from Europe and the Americas have done so. In a sharp departure from the hemisphere’s institutional framework, he even called for military intervention in Venezuela.[1]

Almagro is personally responsible for breaking the OAS regulations

Almagro has gone so far as to directly harm the institutions of the OAS. In April 2017 the Secretary General himself helped the representative of Honduras, Leonidas Rosa, to illegally occupy the chairmanship of the Permanent Council for a few hours while its legitimate Chairman, Diego Pary of Bolivia, was out of the room. The purpose was to hold a vote against Venezuela, which nevertheless failed due to lack of a quorum.[2]

Although the OAS proclaimed electoral fraud in Honduras, Almagro did not act

Another scandal occurred during the presidential election in Honduras in 2017 when the OAS’ own electoral observation mission found that there had been electoral fraud.[3] Almagro proceeded to recognize the government of Juan Orlando Hernández anyway.[4] This situation remains unchanged even though Hernández himself has been implicated in drug trafficking cases in New York, along with other members of his family.[5]

He legitimized the coup d’etat in Bolivia

In the case of Bolivia, Almagro proceeded to legitimize the coup d’etat against President Evo Morales. He endorsed the false, manipulated, and statistically incorrect reports that came out of an electoral observation mission that failed to respond to Morales’ own calls to redo the elections. Almagro refrained from denouncing the violence caused by the opposition, which burned the homes of government authorities, kidnapped the relatives of legislators, and consistently perpetrated violence against Morales sympathizers.

Although the massacres in Sacaba and Senkata were condemned by the Inter-American Commission on Human Rights, Almagro has remained silent about them. Instead, he rushed to recognize the de facto government that overthrew Morales.[6]

Complaints about corruption within the OAS itself have been paralyzed

Back in Honduras, Judges Daniel Urrutia and Julio Arbizu, as well as spokesman Juan Jiménez Mayor, resigned from the institution that was trying to put an end to the country’s flagrant corruption, the Mission to Support the Fight against Corruption and Impunity in Honduras (MACCIH). The judges reported that the Office of the Inspector General of the OAS never made any effort to investigate corruption within the OAS itself, and alleged there was a pact of mutual impunity between Almagro and the de facto president Hernández.

To this day the investigation of the OAS is completely frozen and the complaints have gone nowhere.[7]

He pushed for a vote on his re-election, despite the Coronavirus pandemic

The vote by which he was re-elected as Secretary General was emblematic of his manipulation of OAS processes. Even though restrictions had been imposed by the government of Washington DC to limit the spread of COVID-19, Almagro ignored the request of 14 ambassadors (Mexico and 13 CARICOM countries) to postpone the vote until after the emergency.[8]

No press was present for the vote and even the other candidate, former Ecuadorian Foreign Minister María Fernanda Espinosa, was not allowed to be present. The former foreign minister thanked the 10 countries that voted for her, showing that “there are other views about what is happening in our hemisphere and the role that should be played by the OAS,” and that “it is possible to build an alternative to the discourse, vision, and practice they are trying to impose here as if it were the only, unquestionable approach.”

She also said that the OAS “has unfortunately become a battleground for attacks, rather than a forum for ideas and principles.”[9]

In a display of his diminished legitimacy, Almagro received only 24 votes, whereas in 2015 the vote was a unanimous 33 (excluding Cuba, which does not actively participate). This time, the U.S. lobbied heavily for him, even pressuring the Peruvian candidate, Hugo de Zela, to withdraw[10] so as not to hinder Almagro’s chances.[11]

The Permanent Council must take on a strong oversight role

Luis Almagro’s re-election as Secretary General of the OAS reminds us of the darkest days of the hemisphere when the organization closely mirrored the divisive foreign policy of the US during the Cold War. COHA calls upon all members of the Permanent Council to carefully examine the many improprieties carried out by Almagro. They must step up their oversight of the political corruption reported in Honduras by the former leaders of the MACCIH, and pressure the office of the Inspector General of the OAS to publish the results of its investigation.

COHA also calls on the members of the Permanent Council to defend the Inter-American Democratic Charter and pressure the Secretary General to resume the role of promoting a dialogue among equals with all the countries of the hemisphere.

This very concern was expressed by the founder of COHA, Larry Birns, in a letter he personally delivered to Luis Almagro at the OAS in 2016. In it, Birns asked Almagro at a very early stage during his tenure as Secretary General, to take a constructive approach to the Venezuelan crisis.[12]

It is imperative that Luis Almagro immediately cease his efforts to promote the foreign policy of one of the member states, the US, which is exerting strong financial pressure on the organization. The OAS belongs to all the nations of the hemisphere, and it should be a relevant and constructive voice among all visions for the region. This role has been utterly weakened and delegitimized under Almagro.

Translation from original version in Spanish, by Jill Clark-Gollub, Assistant Editor/Translator at COHA

[2] “The OAS and the Crisis in Venezuela: Luis Almagro and his Labyrinth”, https://www.coha.org/the-oas-and-the-crisis-in-venezuela-luis-almagro-and-his-labyrinth/