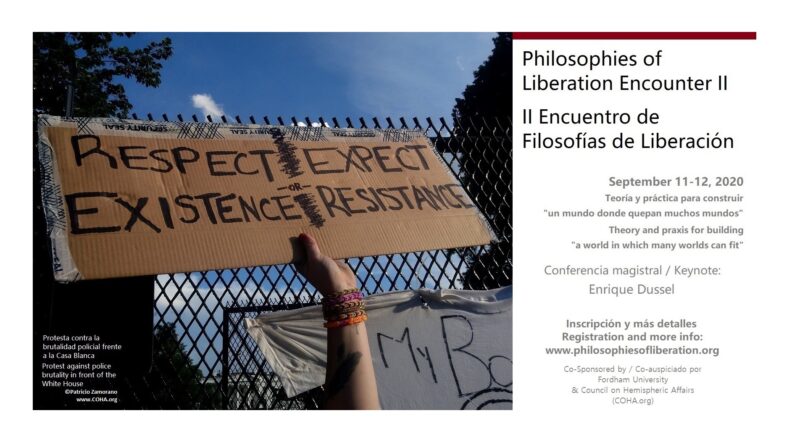 The event will take place on September 11 and 12, via Zoom

The Council on Hemispheric Affairs (COHA) is honored to cosponsor the second encounter of the Philosophies of Liberation Conference, sponsored by Bowie State University and also cosponsored by Fordham University.  The virtual Encuentro II will take place on September 11 and 12 with free access via Zoom, continuing a North-South dialogue that began in 2019 at Loyola Marymount University.

The event brings together scholars and artists from various universities in the US, Brazil, Mexico, Argentina, and Chile, all dedicated to liberatory theory, artistic expression, and practice.

The idea for the two encounters has been inspired in large part by the work of co-founder and leading voice of the philosophy of liberation, the renowned Argentine-Mexican philosopher, Enrique Dussel. Dr. Dussel will deliver the keynote speech of the conference on September 12.

The conference will feature 45 speakers, organized among 14 panels, a musical performance, an art exhibit, and a theatre performance, on topics that include decolonization, ethics, and pedagogy.

The program can be seen here. People can register for the conference by visiting here.

Decolonizing our minds as prelude to building a more just world

Dussel’s ground breaking work, Philosophy of Liberation (1977) and his magnum opus, Ethics of Liberation in the Age of Globalization and Exclusion (1998), as well as his numerous volumes on history, political theory and other decolonizing themes, have inspired several generations of scholars. These academics continue to link the ethics of liberation to the social, economic and political struggle to transform the prevailing system and build a more just world.

The task of transformation is a long-term project; it involves first decolonizing our minds so that we can critically interpret history and expose the underside of the increasingly exhausted neoliberal ideology. This critical work lays the groundwork for an ethics that affirms the growth of life in community, using genuinely democratic procedures, over endless war, extreme economic inequality, and imperial domination.

In concrete terms this means overcoming the Monroe Doctrine in Latin America and supporting regional integration and independence, so that the sovereign peoples of each country can combat corruption and establish democratic institutions that obey their constituent power. It also means building a world in which the great diversity of peoples can share in certain core values that can lead us out of this desert of endless war and the destruction of the earth’s ecosystems to a “world in which many worlds can fit”, to use a Zapatista expression.

Philosophies of liberation are not mere ivory tower academic exercises, but forms of thinking linked to the defense of human life and the biosphere at a time when the very continued existence of the human species is at risk.