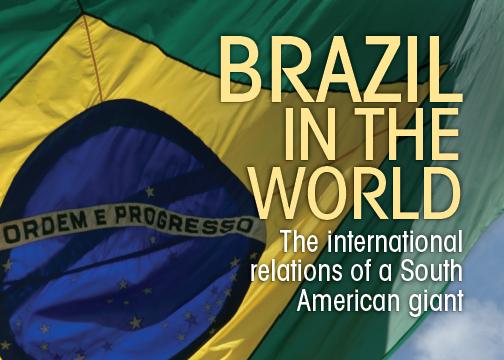 The Council on Hemispheric Affairs is pleased to announce the release of the latest book by COHA Senior Fellow Sean W Burges, Brazil in the World: The International Relations of a South American Giant (Manchester University Press, 2017).

In his latest book on Brazilian foreign policy, COHA Senior Research Fellow Sean W Burges argues that Brazil is pursuing a foreign policy agenda designed to challenge and transform, but not overturn existing patterns of global structural power. This is distinct from the pursuit of relative power in that it concentrates on opening space to pursue policies suited to Brazilian priorities such as national social and economic development. A series of issue areas – multilateralism, trade, and security – are examined as well as the pattern of bilateral relations in South America, the Global South and with China and the USA to trace how Brazil formulates its transformative foreign policy agenda and works to implement it regionally and globally. Through this examination the book highlights that mainstream approaches to international relations miss the nuance of what emerging market countries such as Brazil are trying to accomplish. The analysis also highlights the extent to which foreign policy making in Brazil is changing as a field of public policy and the degree to which sustained political attention is necessary for a dynamic and innovative international engagement approach. Specific focus is given to tracing how and why Brazil has moved onto the global stage, leverage its regional predominance in South America into a global leadership role and bridge between the North and South in international affairs.

The book is broken into three broad sections. In the first attention is given to explaining what is meant by challenging global power structures, the domestic foreign policy context in Brazil, and the Brazilian ‘way’ of practicing diplomacy. With this background in place, attention is turned in the second section to four issue areas: multilateralism, trade, Brazil Inc., and security policy. In each of these chapters attention is given to how Brazilian foreign policy is being used to open existing governance frameworks and notms to create new space for the country to pursue its national development ambitions, often in a manner that actively seeks to include other developing areas. The third section looks at four sets of bilateral relationships, examining relations with Latin America, the Global South, the United States, and China. The themes of seeking to reinterpret global norms to include not just consumption as a priority, but also poverty alleviation and development run through each of these chapters. In those dealing with developing countries the antipoverty push becomes an element for building bridges and gaining access. Conversely, these same prerogatives are shown to create misunderstanding and confusion in bilateral relations with the United States and China. In the case of the US the result is misunderstanding and misperceptions, which creates speed bumps in what is normally, albeit quietly a productive and cooperative relationship. With respect to China the risk is presented as lying mostly with Brazil as assumptions about solidarity prove to be unevenly shared between the two countries, leaving the South American country in a weaker position bilaterally.

This book explains why Brazil has been taking an increasingly prominent international role, how it conducts and plans its regional and global interactions, and what the South American giant intends to do with its rising international influence. The book is written with specialist and non-specialist in mind. Students and other interested readers will find a well-organized, concise introduction to the fundamentals of the foreign policy of an emerging Twenty-First Century power. Those more versed in Brazilian foreign policy will find a series of arguments that challenge accepted understandings of how Brazil’s foreign policy is formed and why it took the evolutionary turn it did during the Lula and Dilma presidencies.

Discount of 30% available until 28 February 2017 For a limited time a 30% discount is available with the code ADISTA5 via the distributor’s direct sales site: https://global.oup.com/academic/product/brazil-in-theworld-9781526107404

Sean W Burges is a Senior Fellow of the Council on Hemispheric Affairs and the Deputy Director of the Australian National Centre for Latin American Studies at the Australian National University. Author Brazilian Foreign Policy After the Cold War (Florida, 2009) he has also published over thirty scholarly articles on Brazilian foreign policy, SouthSouth relations and development in journals such as International Affairs, Third World Quarterly, Development Policy Review, and Latin American Perspectives. He is a frequent contributor of commentary and analysis to the Australian and international media.