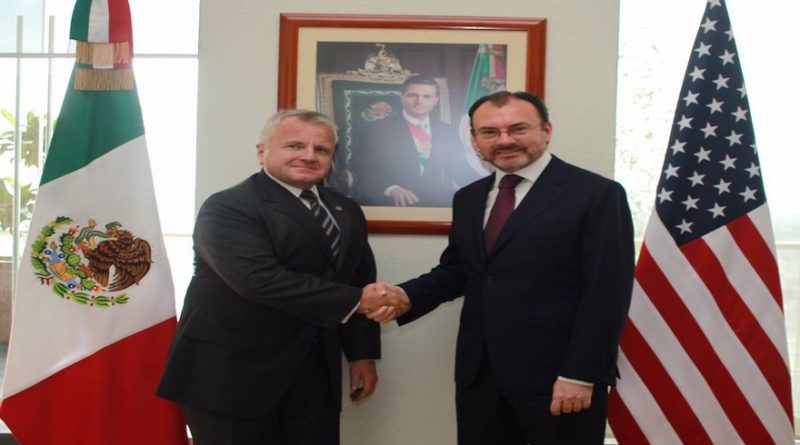 On Monday, November 6th, representatives from the Woodrow Wilson Center’s Mexico Institute, the McCain Institute for International Leadership, the Center for American Progress, and the George W. Bush Institute met to officially announce the creation of a joint U.S.-Mexico Task Force. In attendance were the Director of the Wilson Center’s Mexico Institute, Duncan Wood, Senior Fellow for the Center of American Progress, Dan Restrepo, and Senior Director of the McCain Institute for International Leadership, Michael Polt. Former Senators Tom Daschle and Trent Lott, who currently serve as the co-chairs of the initiative, were also in attendance along with current representatives Eliot Engel (D-NY), Norma Torres (D-CA), and Will Hurd (R-TX).

The mission of the new task force is to strengthen the bilateral relationship between the United States and Mexico by “inviting policy makers from Capitol Hill, state governments and stakeholders from both sides of the border to participate in a series of conversations–in Washington DC and beyond–about the need to preserve and strengthen one of the United States’ most important and complex relationships.” [i]

During the conversation, Duncan Wood outlined the role that think-tanks like the aforementioned institutions will play in condensing pertinent information in an intelligible and easy-to-read manner. Think-tank involvement is critical to contextualize the complex history between the United States and Mexico and to help “educate people about the importance of this relationship.” In addition to public education, think-tanks are able to use evidence-based research to counteract the anti-Mexican vitriol that episodically spews from the Trump Administration.

On Capitol Hill, congressmen and women engaged in the new task force are demonstrating the need for bipartisan discourse to help not only maintain the current state of U.S.-Mexico relations, but to strengthen it and make positive leaps forward in a turbulent time. In regards to security, Congressman Engel (D-NY) highlighted the importance of U.S.-Mexico cooperation by iterating that “It is hard to overstate the importance of our relationship with Mexico and what it means to U.S. security on a daily basis.” Moreover, in regards to economic integration, Congressman Will Hurd (R-TX) expressed the importance of modernizing NAFTA 2.0 by updating clauses concerning labor and the environment. He also drafted new proposals to better adapt NAFTA to a 21st century economy by incorporating the data economy and energy sector while stressing the importance of the Trump Administration abandoning the erroneous belief that we must “bring back manufacturing jobs to the U.S.” The need to maintain strong bilateral economic integration is best demonstrated by the fact that in 2015, U.S. exports to Mexico totaled USD$236 billion, which was more than twice as much as exports to China (USD$115 billion). [ii]

Lorna Romero, Vice President of Communications and Advocacy for Molera Alvarez in Arizona, Dulce Anayasaenz, a political strategist from Colorado, and Miguel Solis, President of the Latino Center for Leadership Development all expressed the importance of increased people-to-people engagement to help erase misconceptions and build a stronger transnational community between the U.S. and Mexico. All three also touched on the importance that the bilateral relationship has had on bettering everyday life in their respective states. They, along with representatives from Capitol Hill and the various think-tanks engaged in the initiative, reiterated the importance of engaging everyday United States citizens in dialogue to better understand the value of a strong bilateral relationship with Mexico.

The U.S-Mexico Task Force thus serves as a light in a rather dark time in U.S.-Mexican relations. The initiative’s importance not only resides in its goal to engage policymakers in pertinent discussions regarding an extraordinarily crucial relationship with our southern neighbor, but to also reach out and educate the general public on the necessity of bilateral relationship through evidence-based research and citizen diplomacy.

COHA supports the U.S.-Mexico Task Force and values the need to strengthen relations with our southern neighbor. However, COHA does not remain static in its ongoing examination of U.S.-Mexico bilateral security and economic policy. Not only should the task force work to push back against the Trump administration’s hostile rhetoric towards Mexico, but also must not forget the U.S. government’s historic complacency regarding issues of grave human rights abuses perpetrated by the Mexican government, the current femicide crisis, and the ongoing lack of economic opportunity for a large proportion of the Mexican populace.