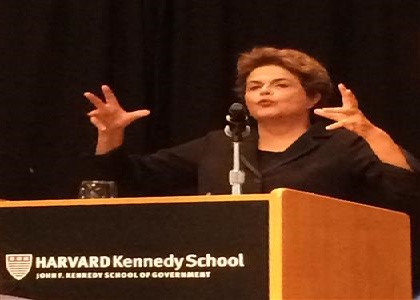 By Kate Teran, Research Associate at the Council on Hemispheric Affairs

On April 22, the Council on Hemispheric Affairs’ Research Associate, Kate Teran attended the Latin America Conference in Cambridge, Massachusetts sponsored by Harvard University’s Kennedy School of Government. Speakers at the conference included the ousted former president of Brazil, Dilma Rousseff, the discredited former president of Mexico, Carlos Salinas de Gortari, as well as a number of regional officials and ambassadors representing their home countries. The eight hour conference embraced the theme of “Moving Beyond the Crossroads: How can Latin American overcome its old and new challenges?”

Highlights from the conference included a powerful keynote speech from Dilma Rousseff where she described the “glass ceiling” as “being covered by a layer of men,” and a panel called ‘The Trump Administration and its priorities for Latin America’ in which Mark Feierstein, former Senior Director for Hemispheric Affairs during the Obama Administration, Julissa Reynoso, former US Ambassador to Uruguay, and Michael Shifter, President of the Inter-American Dialogue weighed in on the future of U.S. Relations with Latin America. Reynoso emphasized the need for a united region to hold the United States accountable particularly within the OAS. Shifter repeated a similar sentiment emphasizing the need for the region as a whole to monitor Chinese investment. When the highly contentious topic of NAFTA came up Mark Feiernstein expressed doubt that Trump will ever pull out the United States from the trade agreement. All in all the panelists seemed doubtful that Trump will have a lasting influence in Latin America but emphasized the need for major reforms are called for throughout the region.

By Kate Teran, Research Associate at the Council on Hemispheric Affairs